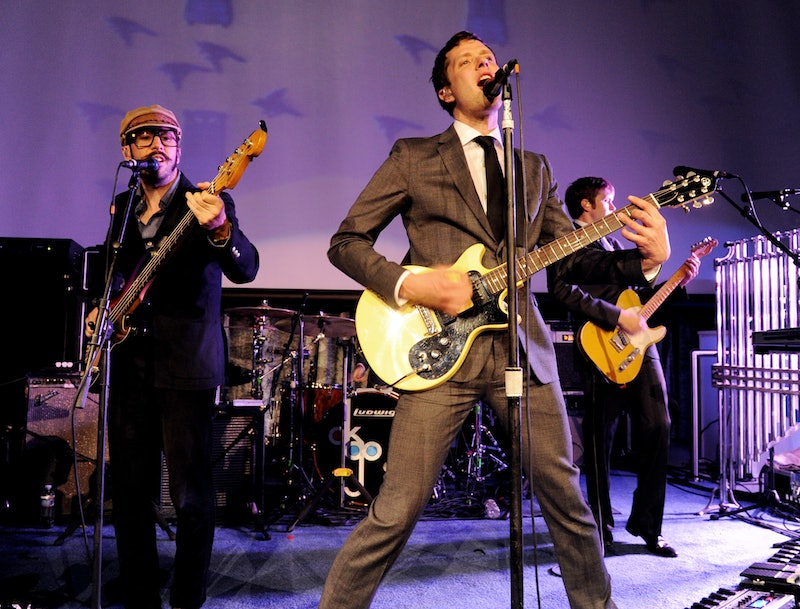 I went to college smack in the middle of Connecticut. If a band was touring and skipped New Haven on the New York-to-Boston path most bands took, my friends and I would have to make an hour and a half trek to either New York City, Boston, or Providence to see them there instead. Then again, if a band we really liked was touring, sometimes we'd make the trip to New Haven, New York City, Boston, and Providence, or some combination thereof. (College road trips are the best, you guys.)

Rarely did the opening act ever catch our attention, but, on one of these four-city stops, one stood out above the rest. There was something different about them. If one of the band members broke a string, two others would sing "The Confrontation" from Les Misérables a cappella while the guitarist fixed it. They did the best covers. At the merch table, they sold a VHS—a VHS!— of the band doing a choreographed dance on a local Chicago public-access television show. (We bought it.) Sometimes, if they had enough time and room on stage, they re-created the dance live.

The band turned out to be OK Go, and, when they started getting attention for their treadmill video to "Here It Goes Again," my college friends thought, "Hey, we know those guys!" On August 30, Oh No, the album with "Here It Goes Again," turns 10 years old. In that time, the band's reputation for crazy stage antics has grown, with tricks like songs played on handbells and laser suits. But, mostly, they're still known for their videos. Here, a definitive ranking of the official OK Go videos, from Oh No and their other albums.

I wish I were part of this parade. Watching it, though, must be one-tenth as much fun as actually being there. Other than the fact that the parade route spells out their band logo, this video is missing the spark of hyper-creativity that marks most of their other videos.

This is another video that suffers from the crippling envy I feel that I didn't get to participate in it. Apparently it was filmed with real fans while they were on tour with the Vines. I watched OK Go open for a lot of bands in those early years, but I definitely drew the line at the Vines. (Also, in a move that I'm sure was only to heal my sore nerves, a different version of the video came out in the UK that, IMHO, has a little more style and panache. There, the dancers are pros and not fans.)

This one is personally fun for me, because I was definitely at some of these shows — what up, outdoor Providence festival along the water! — but, for others, I bet it feels more like a full-length tour trailer than a video.

I like the moody black-and-white, but no video can compete with the live handbells version.

This dancing in this one is neat, and apparently you can watch it in 3D, but it loses points for two reasons: 1) no one can watch 3D videos at home (fine, well, some people can, but I bet the average OK Go fan can't), and 2) Where's the band? I won't pretend that I don't watch these things at least partly for lead singer Damian Kulash.

As much as I appreciate blowing shit up, this video only has one hand to play, and it shows all its cards immediately and has nowhere to go from there.

That whole trails/multiple person effect? I'm pretty sure my family's first VHS record had the capability to do that. I'm not immune to the pretty colors, but I'm also not that easily impressed.

I think the band wants this video to be forgotten, because I couldn't find it on their own official YouTube page. (Or maybe it's some kind of rights thing, because it was posted by EMI Music.) But I have a long memory, OK Go. This is the first video for the first single of the first album, and if you ever needed an awesome reminder of what the world was like in 2002, this is it. I mean, just look at Kulash's haircut.

And you thought toast was boring! Now that you know it's such an excellent medium for animation, you can no longer use the word "milquetoast" as a pejorative.

This video feels futuristic and retro at the same time. The ways they use the stop motion and play with time are certainly novel. And yet, it looks like the videos I remember watching on MTV in the '80s. The monochromatic hoodie outfits definitely contributes to that in a totally good way.

I can't tell if these wallpaper people are really cool-looking, or the stuff of David Lynchian nightmares, but I will remember them.

Video pro: Amazing dancing and movement, courtesy of modern-dance troupe Pilobolus. Con: There's apparently a "way cooler," interactive version of this video at allisnotlo.st that I could not get to work. It could be that I didn't close all of my browser tabs like the video asked, but OK Go should realize that I watch videos when I'm taking a five-minute break from work, and I need to keep those tabs open in case someone walks into my cube. I can't sacrifice my multitasking abilities for their innovations.

Obviously, this one is another jaw-droppingly complicated, amazing video. The Honda scooter chairs are neat, and definitely more mobile than the treadmills. If I had to nitpick (and, forgive me, I do), I'd say this video seems like a combination things that were already praised in other OK Go videos: The rolling choreography from "Here It Goes Again" plus the one/long take of "This Too Shall Pass." Still, the aerial shots are really neat, and filmed with drones before everyone including Martha Stewart had one. It also makes me want to buy a cuter umbrella.

This shouldn't really count, because I don't think it was ever an official video — it's clearly a homemade, pre-treadmill affair. But I love it, because this is definitely that goofy band I saw do all of those opening-act gigs way back when.

I'd like to say I have an intelligent reason for ranking this one so high—something about how it was technologically groundbreaking or artistically mind-blowing — but there's one real reason it's up here: puppies! Yes, I ranked the dogs above Pilobolus. Both are highly trained, but only the dogs have tails that sometimes wag in time to the music. That really kills me.

This is another triumph of logistics: All of the instruments had to be spaced apart just so (all those pianos!), the car has to be driven at the exact right speed, and poor Kulash has to sing and drive at the same time to pull it all off. But my favorite thing about it is the way the video actually changes the sound of the song, so it's like you're getting a cool movie and a new song at the same time.

So many visual tricks! When you watch this video, you spend half the time thinking, "Wait, what am I really seeing?" and the other half wondering "How did they do that?" It definitely requires repeat viewings, particularly when you're procrastinating a big project — I mean, practicing those aforementioned multitasking skills.

I bet you thought this would be in the No. 1 spot, being the video that propelled them to stardom and all. It's not, but I do still love it, even after 10 years. Why? Not only are the treadmill tricks fun to watch, the focus is still on the band, and not really any special-effects bells and whistles. I think you can see their personalities shine through here more than in some of their more elaborate videos.

This video has everything. There's the elaborate Rube Goldberg machine that not only stays in constant motion, it continually creates some beautiful images, like a flurry of open umbrellas that fall gracefully to the floor. On top of that, the filmmaking is so impressive, being all one take, that it's almost stressful. (I can't imagine what it must've been like to get three minutes into the video only to have something mess up and have to start back at zero.) My favorite part is when the music and contraption come together, and part of the song is played in the spoons. I could spend years with my own domino set and never get something like that to come out right. Kudos to you, OK Go, and keep it up for at least another 10 years!