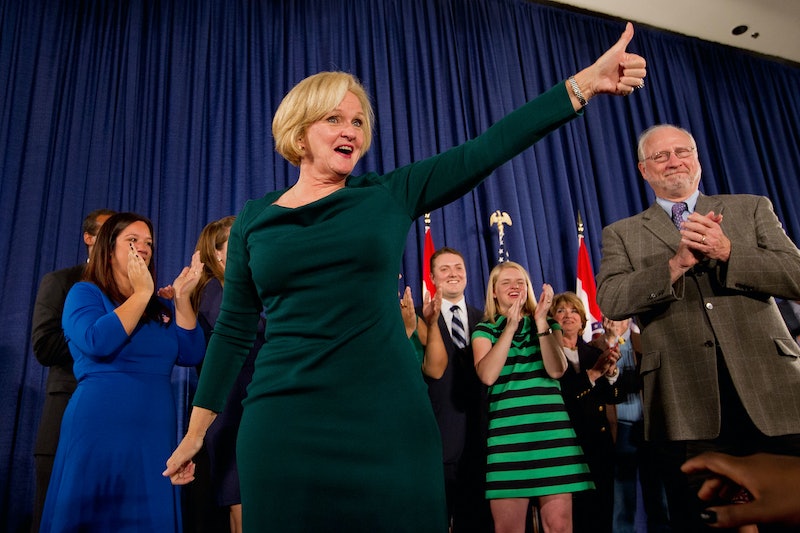 Well, folks, there's no stopping this high-achieving political leader. Missouri Sen. Claire McCaskill is a woman to watch. And don't discount her just because she is a representative of a "flyover state" (ugh, that phrase). In the past year alone, Sen. McCaskill has worked on important legislation, including the Campus Safety and Accountability Act, for which she teamed up with New York Sen. Kirsten Gillibrand to ensure stricter sexual assault laws on college campuses. She has taken a stand for the issues that matter, and her voice is one that hasn't gone unnoticed in the national dialogue. With all of the above and more in mind, here is a long overdue ode to Senator Claire McCaskill.

McCaskill, or @clairecmc, who has serious social media game, is apparently also a hell of a lot of fun at a St. Louis Cardinals baseball game. In a recent feature in The Cut, Marin Cogan described the good-natured senator's moxie and wit (and her gemstone-studded Cardinals flip-flops).

As a fellow Missouri woman, I've long wanted to sit down for a gal-to-gal chat with "my girl Claire," as a few of my friends and I refer to her. But now, I really just want to join her at a Cards game and throw back a couple of Bud Selects. And while we would talk about serious issues — such as sexism in the workplace, ending sexual harassment and rape on campus, and her feminist new book Plenty Ladylike — I think I might emit a few side-splitting laughs in the process. Because my state senator is a badass, and here are just a few good reasons why.

She's A Feminist And An Ally

This spring, McCaskill tweeted about a recent Game of Thrones episode, saying that she was "so done" with the show after its "gratuitous rape scene." And as The Washington Post said, she had a point. Many fans had an issue with the fact that the scene was not originally in the series of books on which the show is based.

McCaskill fights against rape culture in the real world, and she calls it out in the fantasy world, too. Right on.

She Speaks Her Mind

As the 2016 election approaches, the political sphere becomes a pretty vocal one, and McCaskill is no exception from her colleagues. But when she speaks, whether on social media or in interviews, it's clear that she's not spewing random words. McCaskill is prepared to speak about what she truly believes. In a June interview on Morning Joe, McCaskill said that she thinks "the media is giving [Sanders] a pass right now" in relation to his socialist views. A strong supporter of Hillary Clinton, McCaskill is all in for the people she supports. And whether you agree with her or not, she's got her reasons for her views, and will stick to them.

She Fights For Important Legislation

The Campus Safety and Accountability Act is one example of McCaskill's strong stance on issues that matter for women across the country. And the fact that she works across party lines to ensure this legislation exists speaks volumes for her leadership. When the reauthorization of the 1994 Violence Against Women Act stalled in the House after passing in the Senate, McCaskill spoke out to ensure that it ended back on President Obama's desk and back in action.

She Listens To And Acts For Women

One of the themes of McCaskill's new memoir, Pretty Ladylike, is simple but vital: "Own your ambition." She used these exact words when her daughter Lily Esposito interviewed her for Elle, saying that of all the things a woman should have in her life, her own drive and ambition should take top billing. When Missouri legislators suggested a dress code for Missouri House interns, McCaskill spoke up, sending out a letter of protest in response. As a former prosecutor for sex crimes, McCaskill knows that "victim blaming in the context of sexual violence is as old as the crime itself."

She Does What She Thinks Is Best As A Leader

Wherever she goes, it's clear that McCaskill keeps close to her Missouri roots. And she ultimately does what she thinks is best for both her state and her country. In her book, McCaskill talks about one of the riskiest moves she ever made in her career: boosting primary candidate Todd Akin's campaign with $1.7 million so that he would be her opponent. McCaskill says that she wanted to run against a candidate she could beat. She thinks strategically and appears fearless in doing so. And according to an excerpt of her book published in Politico, she shotguns a beer in the process.

So, Sen. McCaskill, please keep on being the senator who I, as a Missouri-born New York transplant, am proud to call my own. And if you're in New York next summer, maybe we can catch a Yankees/Cards game? The beer's on me.