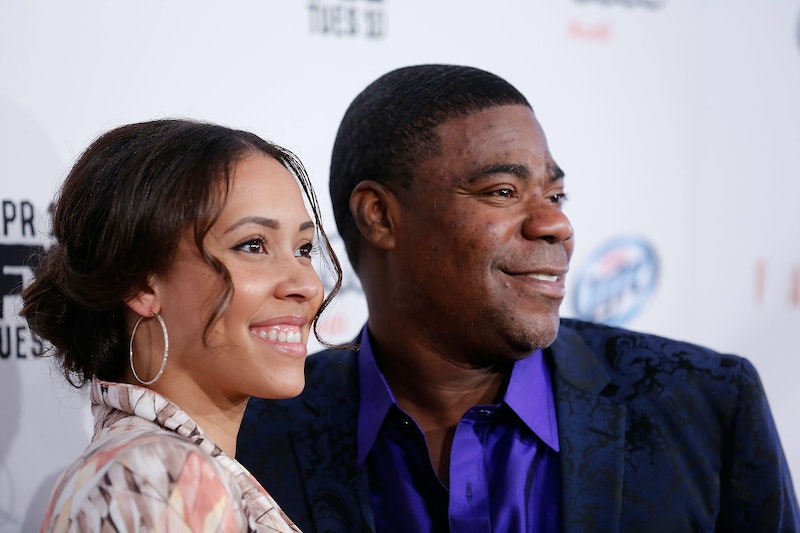 The comedian has had a particularly rough year, but now, there's some good — nay, great — news surrounding the SNL alumn: Tracy Morgan married Megan Wollover in Cresskill, NJ, on Sunday, according to Us Weekly. Congratulations to the happy couple! The pair began dating in 2011, and have a 2-year-old daughter, Maven Sonae, together. Morgan also has three grown sons from his previous marriage.

In June of last year, the 30 Rock actor was involved in a car crash when his limo was hit by a Walmart truck driver on the New Jersey Turnpike. The crash resulted in the death of his friend James McNair, and left the 46-year-old actor with many injuries including a broken leg, nose, ribs, femur, and brain injuries. Morgan spent many months recovering from his injuries, but now it appears the funny man is back on his feet, and will even host SNL in October. It was heartbreaking to have SNL's 40th anniversary without the veteran in tow, so this happy news couldn't have come at a better time.

With his upcoming SNL comeback and a brand new bride, things are looking up for Mr. Morgan. We can't wait to see what's in store for the talented and hilarious actor in the months to come!

More like this
Cardi B Explains To David Letterman Why She Uses Her Star Power For Politics
By Jake Viswanath
Watch The Dramatic First Trailer For Netflix's Jennifer Lopez Documentary
By Alyssa Lapid
The Very Best Quotes From Dr. Taylor Swift’s NYU Graduation Speech
By Grace Wehniainen
Everything To Know About A Million Little Things' Reported Final Season
By Brad Witter
Get Even More From Bustle — Sign Up For The Newsletter