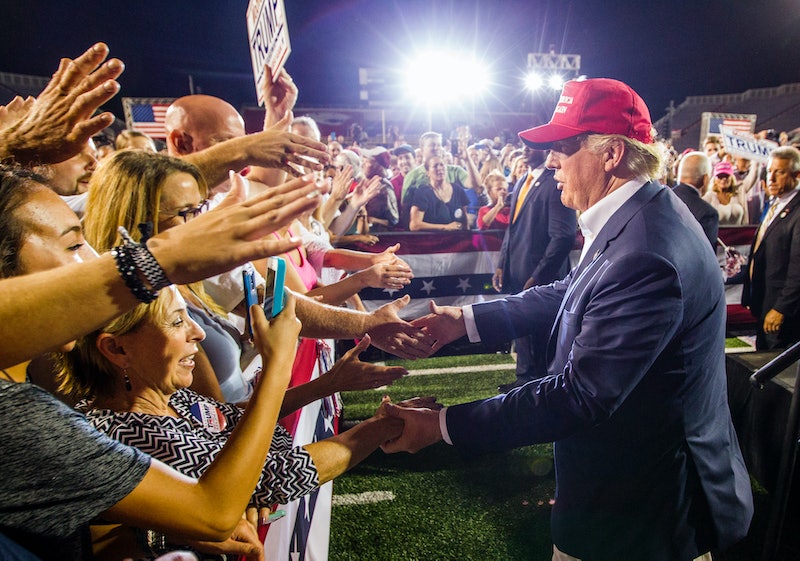 A crowd of roughly 30,000 came to see GOP frontrunner Donald Trump spew out his usual oratory of offensive, inaccurate, and plain bizarre statements on Friday. And it's no coincidence this rally was held in Mobile, Alabama. Trump maintains strong leads in the Southern states of Alabama, North Carolina, South Carolina, Texas, and Florida, and it's important that we recognize that his strong appeal here may be rooted in an unsavory, racially-charged history that politicians of this region would rather leave untold.

It's important to note that Trump supporters make up only a small proportion of the Southern states. And he's hardly demanded that all Eastern or Southern European Catholics up and leave, and he's no segregationist either. But his disturbing xenophobia can resonate with members of a demographic that historically supported one of the most powerfully racist yet least-discussed movements in American history: Nativism. In short: Nativists, who first emerged in the years of unrest preceding the Civil War, were generally Protestant Anglo-Saxon whites who believed that only immigrants of "worthy" countries should be entitled to American citizenship.

Nativism picked up in the mid-1800s, as Catholic and Jewish immigrants from Eastern and Southern Europe entered the United States at rates that appalled Protestant whites who traced their heritage to the "superior" regions of Northern and Western Europe. This paranoia, which led to many rising to fight for a reduced immigration quota from "racially inferior" regions, was rooted in the same fears typical of the right wing. According to Liberty, Equality, Power: A History of the American People, they feared that immigrants were stealing American jobs, ruining the American economy, not paying taxes, and generally taking all kinds of advantage of good, honest white people. Sound familiar? It really should.

It's no secret that the South is also the home of the anti-black terrorist group the Ku Klux Klan (KKK). While the Klan is notorious for its persecution of black communities, in the early-to-mid-20th century, as immigrants migrated north and the South became predominantly Protestant whites, membership in the KKK vastly increased. Why? The group blamed Catholics, Jews, and all non-Anglo-Saxon whites for what they deemed to be growing moral bankruptcy (casual sexuality, alcohol consumption, the teaching of evolution, etc.) in the urban areas of the North.

To "fix" this problem, many supported immigration quotas that called for significantly lower rates of immigrants from all countries except those of Northern and Western Europe. This small quota for ethnic immigration that became the law notoriously prevented many Jews from taking refuge in the United States prior to and during World War II.

So how do Donald Trump and his appeal to the South fit into this picture? There's some insight to be found in the responses of some of his supporters at his Mobile rally, who were interviewed by Politico reporters.

Trump’s appeal to [supporter] Leo Renaldo, is, “That he’s going to send them packing,” explained the 65-year-old, who drove four hours from Mississippi for the event ...

“He tells it like it is,” said Bob House, 57, a maintenance manager, of Trump’s appeal. “None of this political correct stuff.”

Trump literally appeals to one supporter because "he's going to send [Mexican immigrants] packing," and I don't doubt his anti-immigration rhetoric is part of his appeal to supporters. It's what he's most famous for right now. While his stances on so many hugely important issues remain total mysteries -- or, at best, ambiguous -- he attracted national fame for essentially calling Mexican immigrants rapists, drug dealers, and murderers in his presidential campaign announcement. And his only "concrete" policy outline is dedicated to "fixing" immigration.

It's entirely possible that some of Trump's Southern supporters don't really love to hear his words because they want a candidate "telling it like it is," heroically foregoing "political correctness" to deliver the truth. If the truth was what they wanted, they would look into legitimate research that overwhelmingly disproves the idea that immigrants are ruining the economy and "bringing their crime." If the truth was what they wanted, they wouldn't just buy into the sweeping statements of a known racist who really should have zero credibility when it comes to discussing race relations. But the truth isn't what they want. What they want is to blame everything they think is wrong with America on nonwhites, on vulnerable Mexican immigrants. And Trump loudly and proudly gives them this.

The South was where ardent segregationists and presidential candidates Strom Thurmond and George Wallace found tremendous support, considering they were third-party candidates. Wallace himself led five southern states. The South, which historically voted Democrat, largely gave its support to the third party Thurmond and Wallace had engineered, which only differed from the Democratic party on segregation. This is the South that is now welcoming Donald Trump, more famous for his sweepingly anti-immigrant rhetoric than for anything else, in astounding numbers.

Whether Trump's immigration policy supporters believe it or not, they are subconsciously practicing the tendencies of white supremacists by faulting Mexicans with all of their problems, the same way their ancestors faulted Southern and Eastern Europeans, blacks, and Asians. In the historical and current logic of the remaining white supremacists in the South, problems with crime or the economy will never be the shortcomings of native whites, so long as there is one nonwhite group or another to blame them on. Trump appeals so strongly to the South by adding fuel to a flame of xenophobia that is centuries old.

More like this
Sarah Everard’s Killer Wayne Couzens Is Appealing His Whole-Life Sentence
By Sophie McEvoy
How To Fight For Reproductive Rights, Based On How Much Time You Have
By Courtney Young
LGBT+ Men Fleeing Afghanistan Were Denied Asylum By The Home Office, New Findings Show
By Sam Ramsden
Celebrities & President Biden Are Enraged By The Leaked Roe v. Wade Decision
By Alyssa Lapid
Get Even More From Bustle — Sign Up For The Newsletter