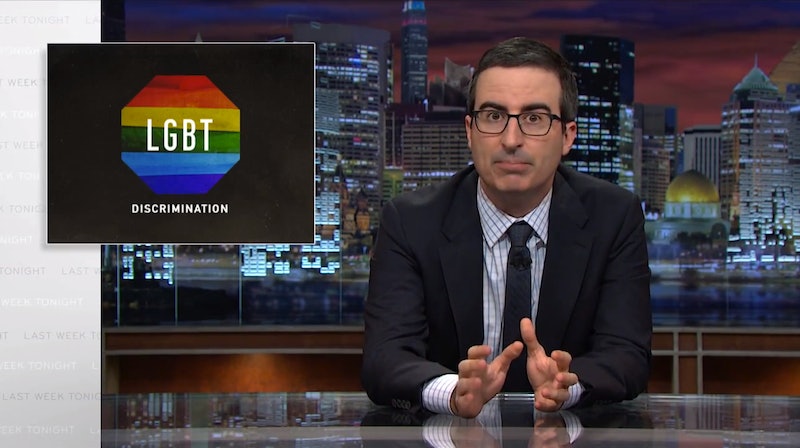 Sometimes, a country's progress is measured in monumental legal rulings, such as the Supreme Court's decision in June that made gay marriage a constitutional right. Other times, it's measured in more banal instances, like when Republican candidate John Kasich got applause for attending a gay wedding. On Sunday night's episode of Last Week Tonight, the latter example was used to illustrate how America, as a country, has come to widely accept gay marriage. Which is great — but as usual, there's a flip side. For his latest investigation, John Oliver reveals LGBT discrimination on a state level that tarnishes America's whole picture of progress.

Yes, undeniable progress has been made. Oliver points out that 10 years ago, we would have never imagined a gay wedding eliciting applause at a Republican debate, the same way we would have never expected to hear the words "Academy Award winner Matthew McConaughey." Gay marriage is now not only a socially accepted notion, but also a constitutional right. But while federal law now protects every same-sex couple's right to get married, there are countless other ways in which inequality still prevails. In 31 states, Oliver says, "people are at risk of being fired, evicted, or refused service just because they're gay."

There have been plenty of real-life examples, like that of Texas couple Collin Dewberry and Kelly Williams, whose waitress said, "We don't serve [expletive] here," and Casey Stegall, a children's social services worker who was fired for his "lifestyle choices."

For the record, being gay is clearly not a lifestyle choice. A lifestyle choice is when a man gets obnoxiously into jazz, or goes on an Atkin's diet and starts a food blog called "Protein Wolf."

While some states have adequate protections in place to prevent cases like these, Oliver's point is that some things shouldn't be left for the states to decide in the first place. Like civil rights ...

... And state birds. You chose the scissor-tailed flycatcher, Oklahoma??! Are you fucking kidding me??

But more importantly, civil rights. For example, Arkansas not only lacks anti-discrimination ordinances, but it also passed an "anti-anti-discrimination ordinance that prevents any city or county from extending civil rights protection to gay people." So as the federal needle keeps moving forward, with policies like Obama's executive order to protect LGBT federal workers, some citizens have witnessed serious regression in their individual states, like Louisiana Governor Bobby Jindal's executive order permitting businesses to refuse service to gay people. Thus, the country's overall progress is constantly at odds with regression at the state level.

It'd be like if Apple suddenly introduced the iPhone 7, and it was a flip phone.

The main driving force behind this federal/state struggle is religion — hence the recent rise of Religious Freedom Restoration Acts in certain states. These acts have emboldened businesses to refuse service to gay couples, arguing that it's their constitutional right to practice their religious beliefs and free speech.

The Constitution isn't the star in Super Mario Bros. It doesn't make you invincible so you can do whatever the fuck you want.

What Oliver proposes, then, is nationwide anti-discrimination legislation that closes all of these state-level loopholes. Luckily, there is something like that currently in Congress: the Equality Act, which would add LGBT protection to the Civil Rights Act, the Fair Housing Act, and others. It would be a crucial piece of legislation, without which marriage equality means little, because the equal right to marry is just one step of many. And therefore, Oliver says, this act "should be what represents the threshold of true gay tolerance — not whether or not you would consider attending a gay wedding."