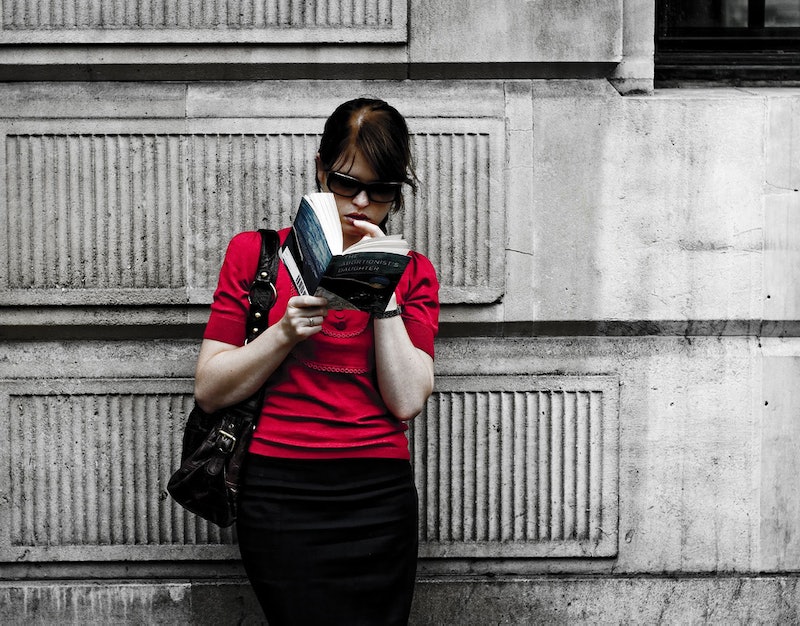 There are lots of reasons I absolutely love books. Sometimes, it's because of the incredibly enchanting worlds within them, and other times, it's because I fall madly for the characters. But, if I really had to choose one thing that brings me the most pleasure in a read, it'd have to be the plot. Yup, I'm a plot kind of person.

"Isn't everyone?" you may be asking, or at least saying to your computer screen, since I doubt we're in the same room. My answer, in any case, is "not exactly." Although there are various genres that books can fit into, in a broader sense, books often fall into two schools of writing: plot-driven and character-driven. In a character-driven work, most of the action is caused by an internal conflict within the characters, whereas a plot-driven work relies on external forces to bring the conflict. Generally, many people tend to think that plot-driven books are faster paced and lighter, but as you'll see in this list, that's not always the case.

I can't say no to good story about struggle against adversity, or a run to survive, or love against all odds. If you're the kind of person who loves that sort of thing as well and are looking for your next fix, check out the books below. From YA to fantasy, there's a little something for every plot-lover.

The Maze Runner by James Dashner

When Thomas wakes up with no memories in an elevator on the way to a place called The Glade, he meets a group of boys who are trapped in the same predicament. Their mission seems to be to stay alive while solving a giant labyrinth covered in ivy and full of murderous creatures called the Maze. Everything changes one day when a girl shows up at the Glade, causing the mechanics of the place to go out of whack, and putting everyone in danger. It's up to the kids to figure out not only how to escape, but why they were there in the first place. The Maze Runner is book one of a series of insane twists and turns.

YA novels love a good specialized dystopia, and Uglies was one of the first of them to come out. Set in a world where once people hit the age of 16 they are put through an operation to make them incredibly beautiful, thus opening them up to a world of nothing but fun in a high tech paradise, 15-year-old Tally is only a few weeks away from such a future. A wrench is thrown into her situation when her best friend Shay runs away and Tally is tasked with finding her... or she'll never become pretty.

Degrassi Junior High meets The Most Dangerous Game! A class of a Japanese Junior High School students are taken to a deserted island and armed with weapons. Their one job: kill everyone until there is only one standing. Part of a totalitarian regime in an alternate history, it's a slightly more down to earth version of The Hunger Games (and was written before that trilogy too), but packed with so many human moments and high octane thrills, it's easy to forget the similarities and love it based on its own merits.

The Coldest Girl in Coldtown by Holly Black

In a world where decadent and dangerous walled cities called Coldtowns exist and mix human with monster, you are never allowed to leave once you pass through the gates. Tana lives a perfectly ordinary life outside of a Coldtown, until one day she wakes up from a party surrounded by corpses and finds one of the other survivors — her ex-boyfriend — infected by vampirism. It's up to her and another mysterious boy to go into the heart of Coldtown to find a cure.

Ready Player One by Ernest Cline

It's the year 2044, and most of humanity escapes the bleakness of day to day living by jacking into OASIS, a virtual utopia made up of thousands of worlds. Wade Watts is one of those players, and dreams one day of finding a hidden easter egg stipulated in the will of the late James Halliday, the creator of OASIS, whose clues are hidden in pop culture from the late 20th century. After becoming one of the first players to find the first three keys necessary to unlock the egg, Wade is sent on an insane journey full of danger as his virtual life steadily eclipses his real one. Ready Player One is set almost entirely in OASIS, but the stakes have never been higher.

A classic if there ever were one, The Last Unicorn follows the tale of (unsurprisingly) the only unicorn left in the world. Shocked at this realization and honor bound to find the missing unicorns lest the world lose its sense of wonder and innocence, she teams up with Schmendrick, a disgraced magician and Molly Grue, a member of a group of thieves who is still pure-hearted enough to be able to see a unicorn. Together they attempt to find the Red Bull, a creature who has been driving the unicorns to an unknown place. After an unfortunate showdown with the creature, the last unicorn finds herself trapped in the body of a mortal human girl and living in a castle with the terrible King Haggard and his handsome son Lir. Torn between her sense of duty and her blossoming feelings for the handsome prince, the unicorn must decide whether to abandon her journey (and her true self) or find the others (and break her heart in the process).

There are a lot of ways you can experience the story of Neverwhere, be it the television serial that spawned the novel, the comic book series, or even the all-star radio adaptation featuring James McAvoy, Natalie Dormier, and Benedict Cumberbatch (I highly recommend this one), the book nevertheless stands on its own. Richard Mayhew is a normal man living in London, with a high paying job, a beautiful fiancée, and the world at his feet. All of this changes the moment he discovers a girl named Door lying on the sidewalk, and after spending an evening helping her he finds that he no longer seems to exist. This kicks off a terrific adventure in a secret underground version of London, where Richard and a motley crew of individuals work together to protect Door from the malicious intentions of professional killers Misters Croup and Vandemar.

Dana, a modern young writer, inexplicably finds herself taken from her home in California and brought to a pre-Civil War plantation in Maryland. There she meets her ancestors, a spoiled white slave owner and a strong black freewoman he has forced back into slavery. As Dana's stays in the past become longer and far more dangerous, she must figure out a way to survive while also taking a look at her relationship with her husband, a white man also trapped into time traveling involuntarily. Grim, beautiful, and ultimately heartbreaking, this book is an unflinching look at not only the past of the characters, but the history of the United States.

It's the Christmas season in a not-too-distant future version of Oxford, where time travel has made the History department ten times more interesting than it is right now. The holiday spirit hasn't stopped young student Kivrin Engle from wanting to travel to the Middle Ages as part of her studies. After a malfunction leaves Kivrin stranded in the 14th century, and Oxford of the future is hit with a deadly influenza outbreak, Professor James Dunworthy must do everything in his power to save her. Doomsday Book features a unique look at time travel, a harrowing plot, and is probably one of the most devastating books you can read. As the winner of more than 11 Hugo awards and seven Nebulas, Connie Willis has won more major awards than any other writer, and with good reason.

For those who like a little world building with their plot, Perdido Street Station begins with eccentric scientist Isaac Dan der Grimnebulin receiving a request from Yagharek, a member of a bird-like species who recently had his wings cut off. In the course of his research to fix the problem, he ends up unleashing a nightmare upon the city of New Crobuzon, and must race to fix it. In the meantime, his insectile artist girlfriend Lin has been commissioned to do a sculpture of mob boss Mr. Motley, and things grow more dangerous for her as the two plots intertwine. Perdido Street Station is dense, visceral, with a world built as thickly as its plot. It's not for the faint-hearted, but the story will stick with you long after you've finished reading it.

You may remember Haruki Murakami from The Wind-Up Bird Chronicle, and this story holds no less of the strange magic inherent in his works. Set in 1984, professional assassin Aomame follows the cryptic instructions of a taxi driver and ends up in a strange alternate version of her world that she refers to as 1Q84. Concurrently, an aspiring writer named Tengo takes on a ghostwriting project that slowly causes him to become obsessed with the eccentric author that ordered it. Over the course of a year, Aomame and Tengo must confront the strangeness of their realities, while trying to run from the tireless attentions of Ushikawa, an investigator hired by a mysterious and ultimately dangerous commune.