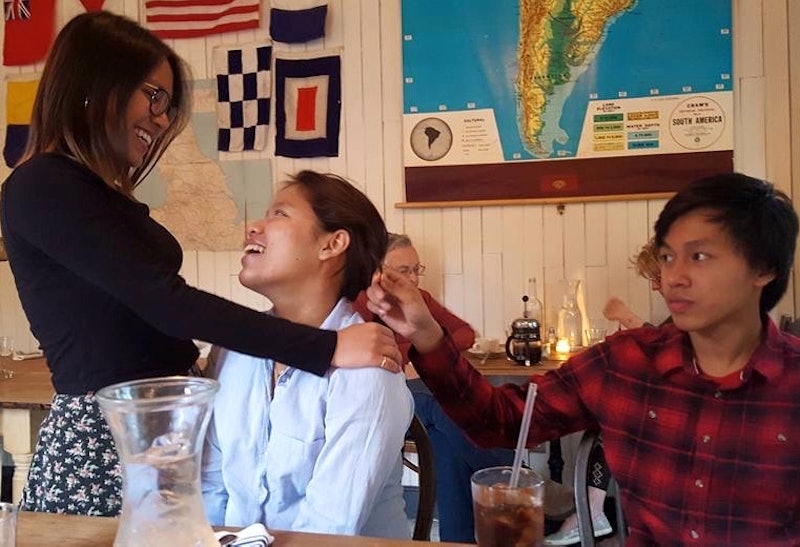 Although my brother, sister, and I had all gone to the same middle and high schools, being three and four grades ahead of them, I always assumed that we’d never be in college at the same time. And for three years, they stayed at home as I worked towards undergrad degree. While I love my siblings dearly, it was nice to be doing my own thing. But then the summer before my senior year, my brother joined the incoming freshmen class at my school, and my sister did the same the next semester. Suddenly, all three of us were starting classes on the same campus. Cue shock, gasp, horror.

Everyone who has siblings know that despite all the petty arguments, you can count on them for pretty much everything, because at the end of the day, they really do have your back. These things were true when we lived under the same roof, and they still held true at college; if anything, knowing our parents weren’t forcing us to tolerate one another made our bond that much stronger. Besides, your relationships with your siblings only get better and more fun as you grow older, and that includes your college years.

Our situation has had its weird moments, but it hasn’t detracted from our overall college experiences. College is (or for me, was) still a really fun and exciting experience — we just get to share it with each other in person instead of simply exchanging stories through texts. That being said, some of my friends claimed that they would “die” if their brother and/or sister went to the same college as them. But here’s the reality that actually takes place when you and your siblings attend the same college:

Your House Is A Complete Disaster Before The School Year Starts

Having three kids pack at the same time is like having three tornadoes go through three different rooms at the same time. Picture this: three children, two suitcases per children, an endless stream of stuff that has been accumulating over the past sixteen years and all of which, of course, we absolutely need. This is when your familial bonds are tested.

For all of your complaints about the size of your dorm room, somehow by the end of the year, you find that your stuff now needs to be transported in boxes AND suitcases AND trash bags. I feel I don’t need to remind you that this was true for each of us, and there are three of us. Oh, and did I mention that we lived in different dorms? I’m still surprised my mom didn’t just get on a cab to the airport mid-moving out under the pretense of buying more packing tape in town.

You Save A Lot Of Money On Textbooks

Textbooks are expensive. And having a brother or sister who has taken a class that you’re going to take is awesome, because they’re pretty much legally obligated to hand over their books to you. For me, it was bye bye, slight profits from selling them back to other students that really weren’t that much, but was still enough to buy a meal at Chipotle.

But at least it’s no longer entirely on you to assure them that yes, you will do your laundry every week, eat healthy, and text them the date that you’ll fly back for break. There are a lot of “final” group hugs and kisses, but it’s really not the last one until you’ve all but shoved and locked your mom into her cab. Yay for teamwork.

Every Time You Skype, It’s Chaos Trying To Gather Everyone In Front Of The Same Screen

And even more chaotic when you try to teach your dad where the camera is. Naturally, your parents also want a million screenshots of all three of you so you have to squeeze into the camera.

If you ever forget that you go the same college as your siblings, your little sister will remind you by coming up to you before class and asking, “Hey, how’s your food poisoning? Mom thinks you’re dead because you didn’t reply to her text.”

Your Parents Upload Any Photos Of All Of You Together

Even if it’s literally just you guys eating take-out. It’s like when new parents document every single second of their baby’s life; it’s sweet for a while, but then enough is enough. Sure, some pics are cute and some are at important events that they couldn’t attend, but I highly doubt their Facebook friends awww'd at us sitting on the same bench.

You Now Share A Lot Of The Same Friends

All of a sudden your siblings are adding your college friends on Facebook, and it’s like two worlds colliding. Now your friends are their friends too and they’re hanging out after class or sitting together at lunch and you have to be okay with it. Which you are, for the most part. It just needs some getting used to.​

You Get Better At Finding Out Each Other's Secrets

When you go to a small liberal arts school where everyone knows everything, you’re bound to hear about all that your siblings are up to. Which definitely gives you a lot of material that you can threaten to expose to your parents.

And At Keeping Them

Except you don’t/can’t blackmail your siblings, because they find out things about you too. Sure, I like to think I keep their secrets because I’m a good sister, but a small part of me is also doing it out of fear of retaliation. You know what they say — what happens in college stays in college.

He was doing what where? That story that you were laughing at and thinking, OMG that’s gross? Yep, that was your sibling. Sometimes ignorance is bliss. And better for your overprotective big sister conscience.

You Set Up A Quid Pro Quo System

“I will edit your essay that’s due tomorrow if you pick me up a burrito in town.” Your parents think you guys are running each other’s errands purely out of love, when really it’s a complex bartering system that’s taken months to perfect.

Professors will come up to you and say, “Hey, so I learned something new about you yesterday…” and friends will gush over a picture of that one Halloween where you guys had a group costume. The skeletons in the closet have all tumbled out, except they’re not skeletons, they’re embarrassing anecdotes about your childhood, which let’s face it, are on par with any dark PLL-esque secrets you may be hiding.

Travel buddies are always fun, whether it’s because you have someone to distract you from the long journey or someone with whom you can complain about the long journey. Also, I think we can all agree that the next best thing to having an airplane row all to yourself is being sat with people that you actually know (and won’t be embarrassed falling asleep on).

Everyone Will Ask You How It Feels

It’s a bigger deal for everyone else on campus than it is for you. You didn’t exactly sit around discussing how everything would change, because it didn’t. But as soon as someone new realizes you’re related, it turns into an interview on your thoughts and feelings, and you pretty much get asked the same things. The most popular question: Is it weird?

To Be Honest, It’s Actually Nice

It’s kinda weird at first, but no more than trying out a new brand of milk or switching internet browsers, both for the better. Once you have a system set up, believe it or not, you enjoy having them around. Truth be told, it’s … fun.

Because Now You Choose To Hang Out With Each Other

Now that you’re not forced to simply because you live under the same roof, whenever you’re together, it’s because you want to be together. You’re no longer required to have dinner at the same time, but sometimes you do, and knowing it’s a choice makes it fun. It’s like when someone tells you to do something you were going to do anyway, which makes you not want to do it anymore; when it’s voluntary, you don’t mind at all.

But You’ve Also Figured Out The Boundaries For Personal Space

Your brother probably wouldn’t mind if you sat with him at lunch, but sometimes you don’t, because that’s his social life. Your sister could hang out in your room every night, but you need that space to yourself. Although when you do want each other around, you’re there for them. It’s important that you guys to figure out your own boundaries so that no one feels suffocated or abandoned.

Because Even If Your Mom Wants You Guys To Do Everything Together, You Know That You Each Still Need To Have Your Own College Experience

Sure, you may have some of the same friends, but chances are, you won’t hang out with the same people on a regular basis. You might share a few classes, but you don’t choose based on whether or not they want to take it too. You’re different people with different interests and that doesn’t change just because you’re at the same college.

Whether it’s at a basketball game, a concert, or a reading, you can expect to see your siblings front and center. It’s like being in high school again, and your parents aren’t there, but that’s fine because your siblings pick up the slack and cheer even louder. Besides, they film the whole thing for your mom so it saves you the hassle of asking your friends to do so.

As a big sister, the strangest part about all of this was accepting that my baby brother and sister were actual college-going adults. You have to be willing to treat your siblings as equals, whether it’s during a class discussion or at a party. You need to constantly ask yourself if something your sibling’s doing would bother you as much if it were a friend (who isn’t related to you) doing it instead.

It’s great to know that at least one — and in my case, two — members of your family are always there. As much as we all enjoy the freedom that college offers, homesickness is a real thing that sets in after a while. Having your siblings with you is awesome because now you’ve always got a connection to home. After all, your siblings are some of the best parts of home.