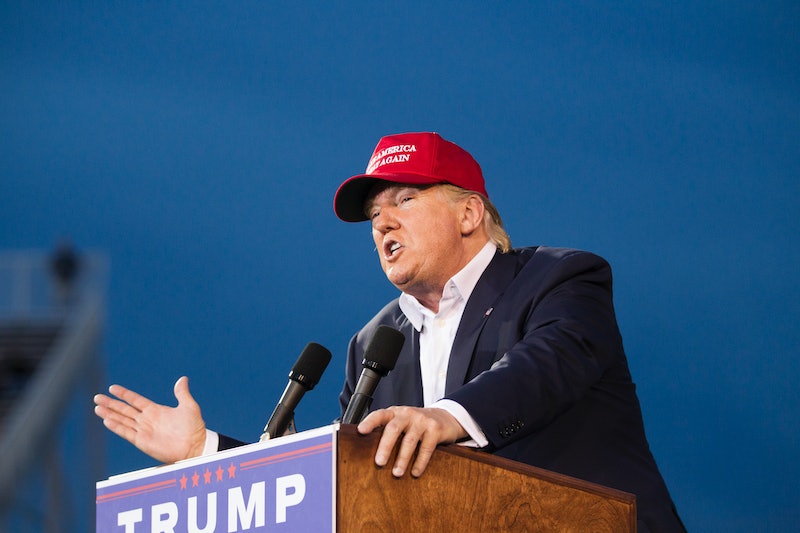 There was chaos on Wall Street Monday morning as the Dow Jones dropped more than 1,000 points moments after the opening bell rang out. Investment analysts are already saying that this is the worst crash the American stock market has seen in recent years, hitting a larger single-day decline than the September 2008 financial crisis. While many on Wall Street predicted the market would get ugly following China's economic crisis earlier this month, it was GOP presidential candidate Donald Trump's reaction to Monday's stock market crash that really rubbed it in.

A businessman by trade, Trump couldn't help but flash his expertise in a series of tweets Monday morning. Really, who could have expected The Donald to stay silent on the collapse of China's market kick-starting a global financial crisis? Trump, after all, is running on an "outsider" platform that pushes his decades in business (excluding his four corporate bankruptcies) to prove he could get America's economy going again. But that would be tough now, considering the market's astounding nosedive.

In one tweet Monday morning, Trump seemed to place all the blame on investors trusting the Asian markets. "Markets are crashing - all caused by poor planning and allowing China and Asia to dictate the agenda," the GOP candidate tweeted. "This could get very messy! Vote Trump."

In an earlier tweet, he told Americans to "get smart."

According to The New York Times, Trump may not have much to lose as the Dow Jones points continue to fall — the Republican front-runner is not known for making most of his fortune from investments. However, he does have some pretty large stakes in foreign markets. As Forbes pointed out last month, Trump's empire currently operates numerous hotels overseas — nine under the Trump Real Estate Collection banner and six under the Trump Hotel Collection. While just two of these hotels are located in Asia — one in South Korea and one in the Philippines — some believe Trump has no right calling out American companies who invest overseas, particularly when Trump is also putting his money abroad.

"Mr. Trump is either inexcusably hypocritical or inexcusably ignorant of economics," Donald J. Boudreaux, a professor of economics at George Mason University, told Forbes. "There is zero economic difference between, say, a U.S. car company’s investments abroad in factories and Mr. Trump's own investments abroad in hotels: both are meant to improve the bottom line of companies headquartered in the U.S. by taking advantage of profitable economic opportunities outside of the U.S."

The business mogul-turned-politician does have some investments, though — mostly in America's biggest and most popular companies. According to CNN Money, Trump's biggest "stock wins" in the last year were Facebook, Best Buy, Boeing, Bank of America and Morgan Stanley. Trump's investment track record shows he tends to invest in these large American companies — a fairly safe move that has garnered him about $27 million, CNN reported. While that number is astounding to us plebes, it's basically a pile of pennies for a billionaire.

All in all, Trump doesn't seem too worried about his own personal wealth during this stock-market tumult.