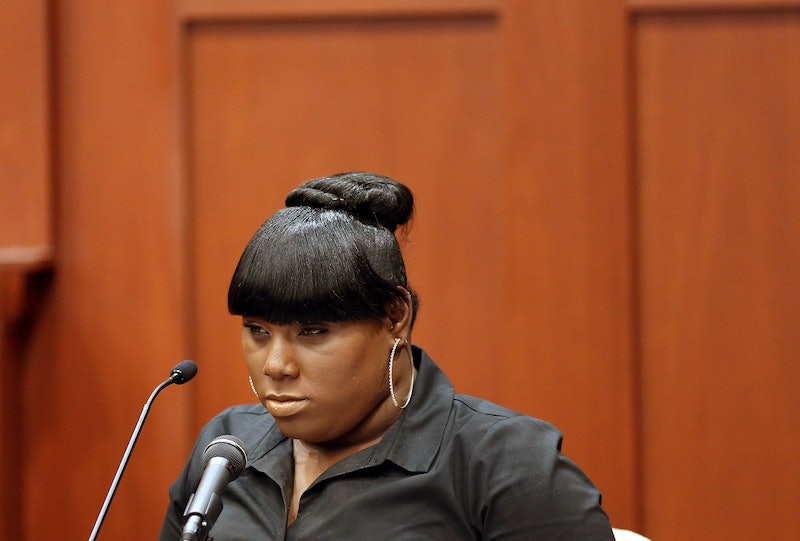 Two of the prosecution's key witnesses in George Zimmerman's second-degree murder trial were cross-examined Thursday, leaving some analysts conflicted about the reliability of their testimonies. The case, in which Zimmerman is charged with shooting 17-year-old Treyvon Martin, has been riddled with incompatible testimonies since day one—but we've got you covered on today's important details:

How is she involved in the case?

Jeantel had been a friend of Martin's since elementary school, and was chatting with him on the phone as Martin wandered home from the 7-Eleven the night he died. (The 19-year-old was widely reported to be Martin's girlfriend, but she testified that they were "just friends.") In the run-up to her appearance in court, the Smoking Gun and other media outlets scrutinized Jeantel's Twitter account and criticized "suggestive" and "incriminating" posts that referenced drunk-driving and drug abuse.

How is she important to the prosecution?

Jeantel previously testified that during their conversation, Martin told her a "creepy-ass cracker" was following him home. She told the court he seemed "scared," and that he walked faster to get away from Zimmerman. She claims she heard Martin ask Zimmerman why he was following him, followed by a crash, and Martin's voice saying "Get off." The call was disconnected, and Jeantel later sent Martin's mother a letter detailing her memory of the night. Her testimony is fundamental to the prosecution's case because it supports their narrative: that Zimmerman approached Martin, and without due provocation, shot him. If Martin did say "get off," this would show that Zimmerman was the first to touch him—a stark contrast to Zimmerman's claim that Martin attacked him.

What happened on the stand?

The defense confronted Jeantel with evidence that she'd lied before: about her age (to Martin's parents), and about her reasons for not attending Martin's funeral. She was presented with the letter she'd "written" to Martin's mother. Jeantel admitted she couldn't read it—"I don't read cursive"—though the prosecution will reportedly insist that she dictated the letter, and a friend wrote it. Defense attorney Don West also drew attention to other odd behavior: Jeantel hadn't called the police, and didn't present herself to the police until much later. Her claim that she and Martin had spoken earlier in the day wasn't backed up by call records, either. Originally aggressive towards the defense, Jeantel later became subdued. (The jury has been told to watch out for not only what the witnesses say, but how they say it.)

How is she involved in the case?

Surdyka was in her home at the time of the shooting, where she claims she heard agitated voices. According to her testimony, she saw two men fighting in the dark outside her home.

How is she important to the prosecution?

After she turned off the lights in her home, Surdyka claims she saw two men fighting on the ground from her upstairs bedroom. She says she'd previously heard a "cry for help," which she "really felt was the boy's voice." Throughout the exchange, one voice was loud and dominant, she said, and the other was meek. She then saw one man in dark clothes, she testified, on top of the other. (Zimmerman was in red, and Martin's hooded sweatshirt was black.) A shot went off, and the bodies separated. Surdyka's testimony, was, in general, compatible with the prosecution's timeline of what happened—and Surdyka certainly seemed to think Zimmerman was guilty.

What happened on the stand?

After Surdyka testified, the defense suggested that the cries for help—which came five to 10 minutes prior to the shooting—could have been Martin speaking on his cell phone in the wind. "I guess," replied Surdyka. Don West called attention to Surdyka's claim that she'd heard three shots—gun analysis had proved Zimmerman only shot once—and to the fact that adolescent boys' voices are often deep. West then pointed out that Martin's chest wound was inconsistent with Martin's being face-down on the ground, as Surdyka claimed he was.

Stay tuned for Day Five of the case, as testimony continues.