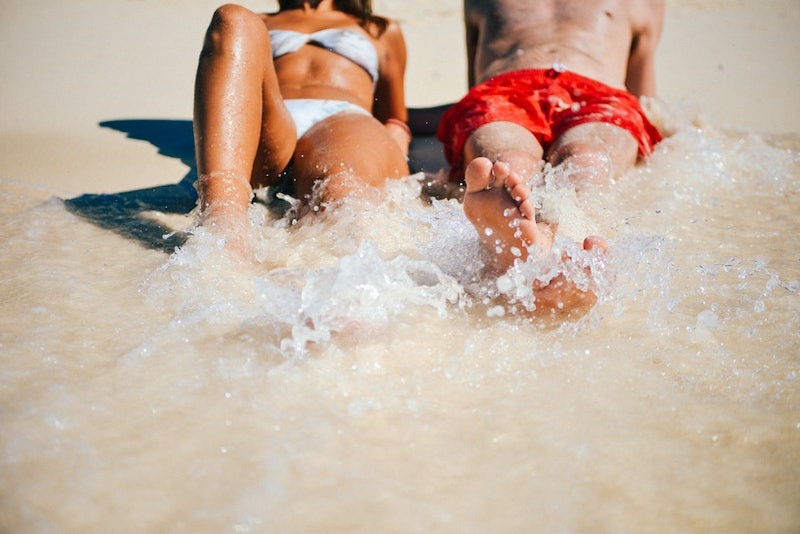 When I moved to the UK everyone was convinced my life would be so different. That I would start speaking differently (nope) and have fancy sandwiches (nope) and tea every six seconds (yes, that one is true). But one of the biggest changes when I moved to the UK— all the penises are suddenly wearing turtlenecks. That and their very different definition for the word "fanny". But that's right, for the first time in my life I was having with sex with uncircumcised men.

At first I was freaked out— what do you do with it?!? I had never seen a penis with its own sleeping bag before, and I was worried I was going to break it. But honestly, it's really not a big deal. In fact, it makes hand jobs way easier because it has it's own little built-in container. And while some of them have a very large foreskin, a lot of them aren't even noticeable when they're erect.

So after an initial learning curve, and just generally becoming used to something completely new in the bedroom, I'm totally indifferent to whether there's one or not. And if you're nervous, just think of it as a fun, new toy. In fact, I think the whole circumcision is so brutal and strange, I've definitely been won over to the non-circumcision camp in general.

Here are seven things you should know about uncircumcised penises:

1. Cleaning Can Be More Difficult

Men have to take a little extra time to clean the foreskin area and under it, and Dr. Harry Fisch told Women's Health Magazine, "the uncircumcised foreskin has certain cells that bacteria can attach to". It's also important because bacteria can incubate there so they have been connected to higher HIV rates. That being said, I've never run into an uncleanly or gross one so I don't think it's that big of a deal in most cases— they've grown up with it, they've learned how to wash it.

2. The Foreskin Doesn't Affect The Boner Itself

Besides the extra skin, there's no change to the erection or to sexual performance. According to Shape Magazine, "a recent Danish study found that guys' odds of premature ejaculation or erectile trouble weren't affected by their circumcision status", so there's nothing to worry about there.

So what I've always heard from uncircumcised guys is that it's better because the penis is more sensitive. Because if it doesn't have a foreskin, it's constantly being bashed around in your boxers or whatever and loses sensitivity, while uncircumcised penises are kept wrapped up tight so that penis itself remains sensitive.

Science seems to back this, Shape says that "circumcision does remove up to half of the skin on a penis—so he loses 'fine-touch neuroreceptors,' which are highly responsive to light touch, according to researchers from Korea" and Dr. Darius Paduch explained to them that after circumcision "the penis has to protect itself—like growing a callus on your foot, but to a lesser extent", so the nerves may become less responsive.

Okay, so the global rate of circumcision is 30 percent, according to BBC, which means 70 percent of the penises in the world are uncircumcised. In the UK it's over 90 percent. So we may not be used to it the States, but uncircumcised are definitely the norm.

5. And They're Becoming More Common In The U.S.

According to CBS News research has shown that "found the circumcision rate in newborns has declined from 83 percent in the 1960s to 77 percent in 2010". They believe this is linked to an increased Hispanic population and also an increase in those without access to health care, although there's also thought some parents just aren't accepting circumcision as the default anymore.

6. It Shouldn't Affect A Woman's Pleasure (Except For Maybe Making It Better)

Like I said, besides getting used to them, they don't affect the actual pleasure in sex at all. In fact, a study in Denmark found that women with uncircumcised partners were half as likely to say they weren't satisfied in bed, according to Shape. One explanation from Paduch was that foreskin retracts and bunches a bit, providing extra clitoris stimulation. Never a bad thing.

7. And It Can Make Sex Less Painful

The same study showed that women with uncircumcised partners were only one third as likely to experience pain during sex. Paduch says "the uncircumcised penis is much glossier, a more velvety feel... So for women who aren’t lubricating well, they mave much less discomfort having sex with a guy who is uncircumcised". So, yeah, I mean, would never say glossier in reference to an uncircumcised penis. Or any penis. Or anything to do with sex. But the point stands.

Want more of Bustle's Sex and Relationships coverage? Check out our video on sex position for small penises.