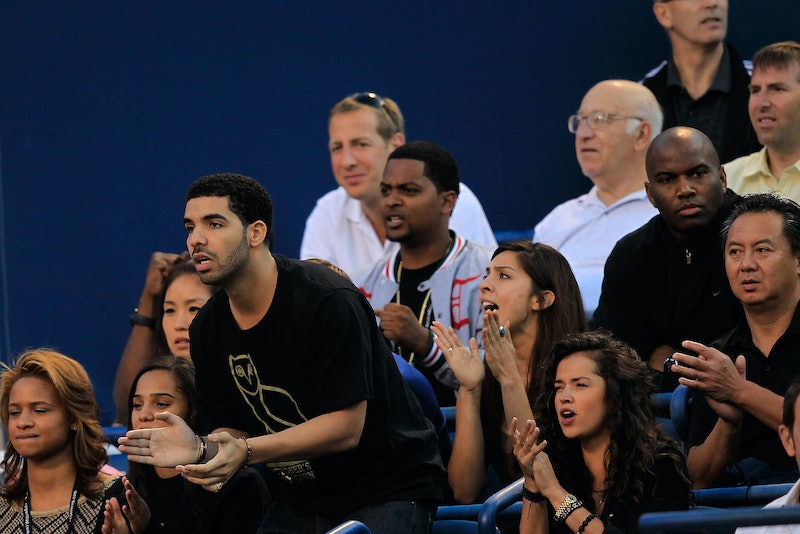 Well, seems like that dedicated courtside support is finally paying off. Drake and Serena Williams are rumored to be dating and, according to TMZ, were spotted "making out" at a fancy Cincinnati restaurant. The website reports that the pair was spotted in a private room at the eatery a few hours after Williams won the WTA Tournament in the city. Several patrons at the spot supposedly told TMZ the two were all over each other. And, although blurry, the photos do look like they were talking mighty close to each other's faces. Obviously, this begs the question: Are Drake and Serena Williams actually dating?

This is not the first time the two have been linked. Rumors of the rapper and tennis champion being friends — and being a little more than that — started as early as 2011. And lately, with his courtside appearances, it definitely seems thatsomething is going on. I decided to do some Internet sleuthing and look into the history of Champagne Papi and the Queen of Tennis to find out what's really going on.

After she ended a three-year relationship with rapper Common in 2010, some photos emerged of Williams and Drake playing tennis in 2011. At the time it looked very friendly, but relationship rumors took off and Drake wasn't afraid to speak out about their friendship. In a November cover story for Complex later that year, Drake was asked about Williams and had some pretty sweet things to say. He shared,

I really, really love and care for Serena Williams. She’s incredible. That’s someone I’m proud to say I know. She’s definitely in my life and I’m in her life. It’s great to watch her play tennis. Very impressive.

In her life, eh? He also got a little cheeky on Twitter around the time they were photographed playing tennis:

Fast forward to summer 2015, when Drake was perched intently in Williams' box during Wimbledon and was a very proud supporter of his friend. Around July, headlines started appearing about a possible coupling between the two, even though Williams had been rumored to be dating her coach, Patrick Mouratoglou. (As for that rumor, there has never really been any sound proof of Williams and Mouratoglou dating because considering they work so closely together, they naturally end up photographed hanging out, anyway.)

Entertainment Tonight reported that when Williams was asked about her relationship with Drake after his appearance at Wimbledon, she rolled her eyes and responded, "We've been friends for, like, so many years... Just like family." Hmmm. Well, there's always the possibility she was just saying this to cover up a possible romantic relationship, because these looks the two were sharing across the court were pretty cute, if you ask me:

Based on the video above and the most recent photos, Drake and Serena Williams just might be moving out of the friend zone. We'll have to wait and see what happens!