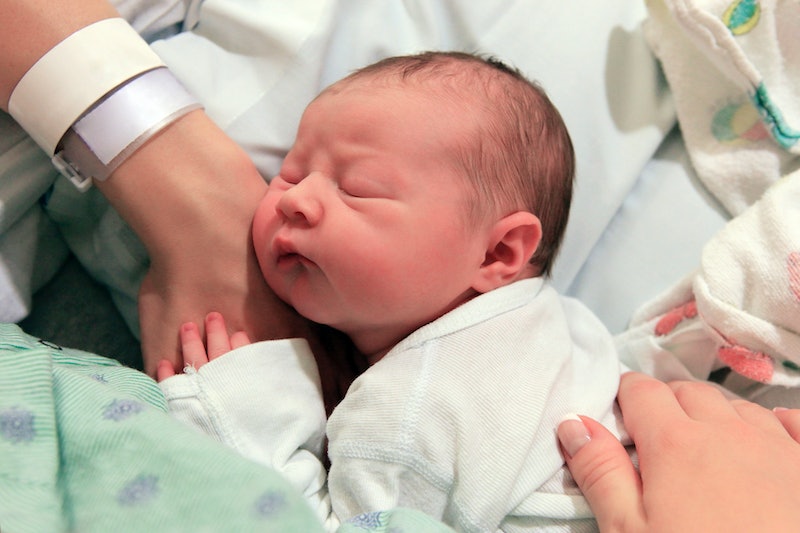 Flip on the TV and you're likely to stumble across at least one reality show featuring a woman giving birth, getting pregnant, or bringing a baby home. There's TLC's A Baby Story, Discovery Health's Birth Day, and the always mind-boggling I Didn't Know I Was Pregnant. But if not, I'll bet you anything that Teen Mom is replaying on MTV. You get my point. Reality pregnancy is everywhere. And according to a new study by the University of Cincinnati, these TV shows affect perceptions women have about pregnancy and childbirth in huge (yet subliminal) ways.

For the project, which was funded by the National Science Foundation Dissertation Improvement Grant, UC assistant professor of sociology Danielle Bessett studied a small but diverse group of women in the New York and Connecticut metropolitan areas. Over the course of two years, Bassett and her fellow researchers followed the television-viewing habits of 64 different respondents from varying socioeconomic and racial backgrounds. During that time, 28 women (44 percent of those surveyed) admitted that they had watched at least some amount of reality television that had to do with pregnancy-related topics. They ranked A Baby Story and Birth Day right up there when asked which shows in particular impacted their perceptions. However, not everyone admitted to tuning in — women who worked outside the home were less likely to watch such shows, as opposed to those who were either unemployed or cared for kids within the home.

"We found clear class differences in how women saw television influencing their pregnancy knowledge," said Besset in a press release for the American Sociological Association. "When asked what part reality shows or fictional TV played in their learning or education about pregnancy and the birthing process, the groups professed two entirely different perspectives."

Women described in the study as "highly educated" were more likely to dismiss reality shows as pure "entertainment," saying that such shows had little impact on them. Meanwhile, those who were less educated tended to view them as an "alternative to traditional childbirth education." In fact, the study authors go so far as to say that these respondents viewed reality TV "as one of many sources that they could take advantage of and basically did not rule any potential source of information out."

That particular discovery is pretty problematic, said Bessett — especially when you consider the fact that previous research suggests that these kinds of reality shows don't often depict, well, the reality of things. "There is a strong sense that what women are getting from those reality shows is a more skewed and medicalized view," said Bessett, who added that fictionalized birth and pregnancy stories may have an even greater negative impact. "My best guess is that they are even more dramatically scripted to keep people's attention and kind of ramp up the emotions of the viewer," she said.

But here's where the study really gets interesting: When Bessett and her team further interviewed each woman, they found that even those who claimed they didn't get their pregnancy or childbirth information from reality TV programs made many references to related scenes that left lasting impressions on them. Such scenes are what Bessett says have contributed to our "cultural mythologies of pregnancy," which she explains are a variety of stories, images, and word-of-mouth tales that over time shape our collective idea of "the way things are" when it comes to having a baby.

As such, Bessett goes on to form this little hypothesis about just how subliminal the impact of television may be — even on those who swear it's not having any impact at all:

If we believe that television works most insidiously or effectively on people when they don't realize that it has power, then we can actually argue that the more highly-educated women who were the most likely to say that television really didn't have any effect on them, may in the end, actually be more subject to the power of television than were women who saw television as an opportunity to learn about birth and who recognized TV's influence.

Translation: While the "highly educated" group might think they aren't being influenced by TV, that's likely because they believe they shouldn't be, not because that's actually what's happening. "This research implies that many women underestimate or underreport the extent to which their expectations of pregnancy and birth are shaped by popular media," continued Bessett. "This important new awareness suggests that scholars must not only focus on patients' professed methods for seeking information, but also explore the unrecognized role that television plays in their lives."

Because after all, how are we supposed to watch these kinds of stories on screen and not be influenced in some way? Anyone who's ever sat through the very realistic birthing scene in Knocked Up knows that it's pretty much impossible to walk away from such images mentally unscathed — fictional or not. (Amiright?) But maybe this isn't completely bad. After all, just last year, the National Bureau of Economic Research credited a drop in teen pregnancies to MTV's Teen Mom for scaring the crap out of viewers under 18 with its depiction of young motherhood. Surely that should count for something.

More like this
What The History Of Pride Month Means For Celebrations Today
By Jay Polish
25 Quotes About Love To Share During Pride Month 2022
By Madeleine Aggeler and Emma Garza
Meet The Spice Company Founder Who Sees Chai As A Metaphor
By Madhuri Sathish-Van Atta
36 Influential AAPI Voices On Pride, Power, & Progress
By Faith Xue
Get Even More From Bustle — Sign Up For The Newsletter