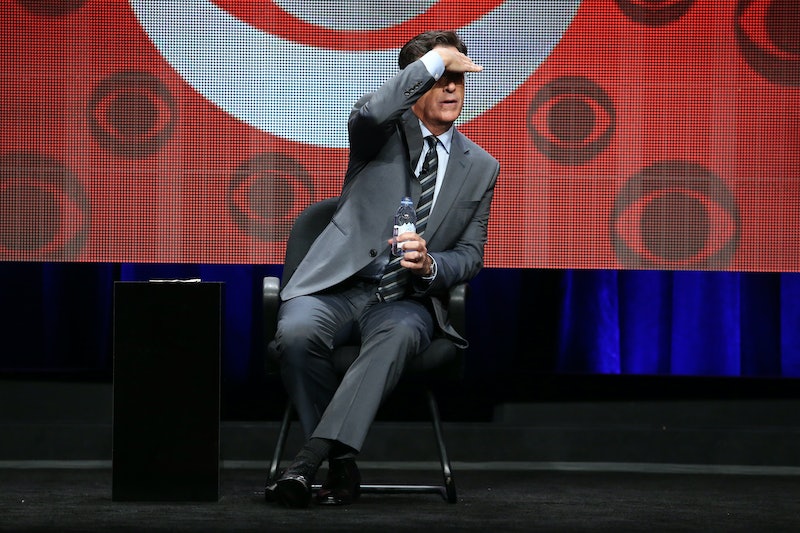 Stephen Colbert thrilled fans when he announced the first guests scheduled to appear on The Late Show With Stephen Colbert (neé Letterman). As if the promise of another shattering Kendrick Lamar performance wasn't enough, Colbert also announced that the Sept. 9 episode of his show would feature panel interviews with guests Jeb Bush and George Clooney — an eclectic mix if I've ever seen one. And, on Monday, Colbert and CBS announced the Late Show with Stephen Colbert's first week lineup of guests, promising a variety of personalities ranging from the expected comedians to CEOs like Elon Musk. But have any of the guests been interviewed by Colbert before? It turns out more than half of the guests for Colbert's first week have never been interviewed by his persona before, so it's gonna be an exciting week of firsts.

Of the lucky few on the list of 11 guests, five have appeared previously on The Colbert Report. The current line-up of guests are George Clooney, Jeb Bush, Jon Battiste and Stay Human, Scarlet Johansson, Elon Musk, Kendrick Lamar, Uber CEO Travis Kalanick, Toby Keith, Amy Schumer, Stephen King, and Troubled Waters, who are billed as a Paul Simon tribute band. One of the most memorable segments of The Colbert Report's nine-year run for book nerds was "Better Know A Stephen," featuring horror-king Stephen King, who will appear on The Late Show on Friday, Sept. 11. King is of course one of Stephen Colbert's favorite authors and people; he made an appearance on The Colbert Report in 2009 in a segment called "Better Know A Stephen" to explain why America needed terror and spooky stories in such trying times while promoting Under The Dome. His appearance also produced an incredible photo of an ecstatic Colbert, and a typically curmudgeonly King, holding hands in matching outfits (red sweaters over white collars).

The other guests that have sat across Colbert before: Elon Musk, the magnanimous genius and CEO of Tesla Motors and SpaceX; Kendrick Lamar, of course, as Colbert's final musical guest (he will be Colbert's first musical guest of The Late Show); and Toby Keith, who has made an impressive four appearances on The Colbert Report. Though that might seem odd to you, Colbert and Keith have a long, mutually loving and respectful relationship that began with Keith's 2006 appearance on The Colbert Report, the earliest days of the Comedy Central show. Just this summer, Colbert returned the favor for Keith when he made a surprise appearance at the Songwriters Hall Of Fame induction in June to honor Keith. He wore his best denim and best cowboy hat to do his best Keith impression by singing "Ain't As Good As I Once Was," and shared how their friendship started:

"He was leaving out the stage door and I was going to the rewrite room. This was very early on in my show and he didn't know what he was in for, I guess," [Keith] turned around to me and he said, 'Hey man, you do a great job — whatever the fuck it is you do,'" Colbert told the crowd in New York at the ceremony while honoring Keith.

Elon Musk, the CEO of SpaceX and Tesla Motors, sat down with Colbert twice on The Colbert Report —once in 2010 and once in late 2014, where Colbert and Musk had a lengthy interview in which the host all but dropped out of character to gush about how excited he was for the future that mad scientist Musk was building.

That's what is so great about Colbert: even when he was deep in his ridiculous, conservative, egomaniacal character on The Colbert Report, his inner fanboy always came out when he interviewed people he truly admired and respected. Colbert has many passions: politics, music, theater, comedy, God, science, books, fantasy worlds — and he invited all kinds of guests to his stage, and thankfully he's brought that same humanist eclecticism to The Late Show. He gets excited about other people's talents, and his reverence goes further: the musical guests Jon Batiste and Stay Human first appeared on The Colbert Report in 2014, and the host was so impressed by them that he asked Batiste to be the leader of his house band on The Late Show.

Though it is disappointing that only two of the billed guests the first week are women, I have faith in Colbert that he will do better as the show finds its voice for what I can only hope will be a long, illustrious run. Though I still haven't recovered from the Colbert chasm — will we ever, ever have a show like The Colbert Report again, with all its genius satire? — this list of guests seems like a promise from Colbert to his fans: not to worry, Colbert still has plenty of tricks up his sleeve.

More like this
What’s New On Netflix: 'Stranger Things' & 'Somebody Feed Phil' Return
By Arya Roshanian
What’s New On Netflix: A Victoria Justice Rom-Com & The Return Of David Letterman
By Arya Roshanian
Kendall Jenner Isn’t Ready To Have A Baby Amid Her Mom’s Wishes
By Jake Viswanath
Kim Kardashian Reacts To Kanye West’s Diss Song “Eazy” On 'The Kardashians'
By Jake Viswanath
Get Even More From Bustle — Sign Up For The Newsletter