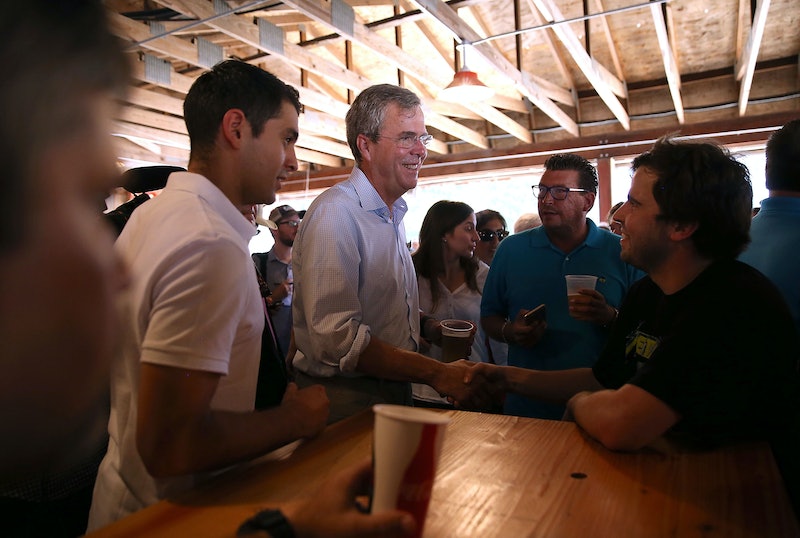 Poor Jeb Bush. Another day, yet another somewhat hilarious scandal. This past weekend, conservative super PAC Right to Rise messed up big time when it sent out mailers to supporters that seemed to show Bush Photoshopped with a black hand. Eagle-eyed Twitter users quickly pointed out that one of the GOP candidate's hands was much darker than the other, and called out the error publicly. Bush's rivals were quick to pounce — including the ever-brash Donald Trump, who labeled the mistake as the latest in a long string of failures: "Jeb Bush has a Photoshopped photo for an ad which gives him a black left hand and much different looking body. Jeb just can’t get it right!"

The leaflet in question featured an image of Bush superimposed onto a stock photo of Cedar Rapids, Iowa. Next to it, the words, "Why Jeb?" were displayed in bold letters. On the back, a shortlist of quotes by The Weekly Standard and conservative Pulitzer-Prize-winning journalist George Will seemed to boost Bush's credentials. Of course, no one cared about any of that, because "Hey look, his hand is black!"

On Saturday, Right to Rise communications director Paul Lindsay quickly tweeted some damage control, sharing the original photo from which Bush's image had been taken, which showed him standing next to a supporter who had cast a shadow on his left hand. Explained Lindsay:

Mysterious hand revealed. Meant to use Valencia. Fail. Not deleting it from our servers.

The newly-revealed photo seemed to dispel any notion that the PAC had Photoshopped Bush onto a black man's body. But still, a gaffe is a gaffe. And with the Bush campaign struggling to keep its head above the ever-present waves of criticism, it certainly didn't help.

Perhaps it's karma for the former Florida governor's recent shift in strategy. As Business Insider pointed out on Sunday, Bush has long left behind the niceties which he and Trump seemed to share during the first GOP primary debate earlier in August, opting instead to face him "head-on" — a risky strategy in the long run.

Late Friday night, just one day prior to the leaflet mix-up, Bush proved just how willing he was to get down in the dirt in order to score a few cheap shots against Trump's suddenly legitimized campaign. As 30,000 Trump supporters filed into the Ladd-Peebles Stadium in Mobile, Alabama, the Bush PAC flew a small plane overhead with the words, "Trump 4 higher taxes, Jeb 4 prez" trailing behind it. But despite the bold move, no one seemed to be buying it.

"Sad little !Jeb plane," mocked one Trump supporter on Twitter. Breitbart also called out Bush, boasting that "Trump has his own Boeing 757 and another smaller jet in addition to three fully functional helicopters." (Did you hear that? Trump has five planes, losers.)

According to one Republican strategist, Bush's long-term game plan to outmaneuver and out-insult Trump could still work — it's just going to take some time. Unfortunately, time is something that Bush might be short on, all things considered.

Couple this with the leaflet controversy, as well as Bush's other recent setbacks (such as his confusing statements on the foreign policies of his brother, former President George W. Bush's, and his insistence in an interview with The New Hampshire Union Leader that already-beleaguered middle-class Americans should work "longer hours"). Time — and fate — may not be enough on the former governor's side to make this new strategy actually pay off.