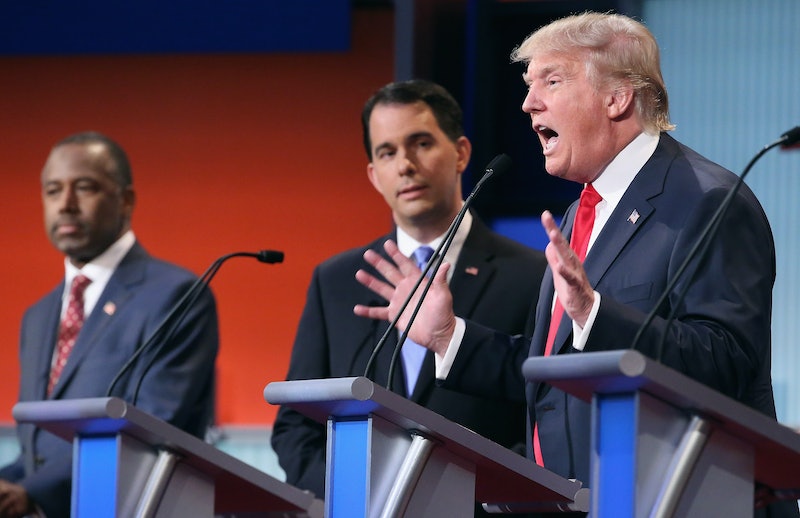 When you put yourself on such a widely and thoroughly scrutinized platform as the presidential election, you're basically asking your every word to be monitored and analyzed. While exercising restraint, discretion, and diplomacy might have been the unspoken protocol for past election cycles, the 2016 presidential candidates are a new breed of unfiltered politicians who will seem to say whatever they want without giving a second thought to who their words might offend or hurt. In fact, insulting large portions of the population in one utterance might be what some of these candidates do best, but a few of them have outshone the rest when it comes to being offensive. So, naturally, it's time to rank the 2016 presidential candidates' most inappropriate comments.

Needless to say, Donald Trump is spearheading this new style of campaigning, consistently leading the pack in offensive statements and distasteful soundbites. He takes the lead in both quantity and quality, illustrating a natural and inherent knack for offending. But that's not to say he should get complacent, because several of his GOP opponents have also made abhorrent comments that give Trump a run for his (vast amounts of) money.

Between the first Republican debate and the endless cycle of campaign stops, press conferences, and interviews, here are the 12 most offensive comments made by the 2016 candidates, ranked from least to most appalling.

When Megyn Kelly asked Trump to comment on his frequent and virulent insults aimed at women, such as calling them "fat pigs, dogs, slobs, and disgusting animals," he made things worse by totally downplaying the issue, blaming America instead, and even threatening Kelly.

The big problem this country has is being politically correct. I've been challenged by so many people, and I don't frankly have time for total political correctness, and to be honest with you, our country doesn't have time either. ... And frankly, what I say, and oftentimes it's fun, we're kidding, we have a good time. What I say is what I say. And honestly Megyn, if you don't like it, I'm sorry. I've been very nice to you, although I could probably maybe not be based on the way you've treated me. But I wouldn't do that.

While Trump might be best known for his stringent stance on illegal immigration, Jeb Bush tried to outdo him with this weird "anchor babies" comment during a radio interview for Bill Bennett's Morning in America:

If there's abuse, people are bringing — pregnant women are coming in to have babies simply because they can do it, then there ought to be greater enforcement. That's [the] legitimate side of this. Better enforcement so that you don’t have these, you know, "anchor babies," as they’re described, coming into the country.

During a feud between Donald Trump and John McCain earlier this summer, Trump sank to new lows by saying this about the Vietnam War veteran:

He's a war hero because he was captured. I like people who weren't captured.

Timing — ever heard of it? Apparently, the answer is no for Ted Cruz and Chris Christie. The day after former President Jimmy Carter announced that he had brain cancer — and redefined the human spirit — Ted Cruz said this at an Americans For Prosperity event in Ohio:

I think where we are today is very, very much like the late 1970's. I think the parallels between this administration and the Carter administration are uncanny, same failed domestic policy, same misery, stagnation and malaise, same feckless and naive foreign policy. In fact, the exact same countries, Russia and Iran, openly laughing at and mocking the president of the United States.

And the next day, at the Iowa State Fair, Christie told the crowd:

Speaking of timing, Cruz seems to have a knack for not having it. Similar to his ill-timed Carter comment, he also made a horribly tasteless joke about Biden just days after his son Beau died of brain cancer. He said at an event in Michigan:

Whatever new lows Trump set with the McCain comment were broken by even lower new lows when he told CNN about Megyn Kelly's debate questioning:

Not only did Carson suggest that rape and incest victims should have the wherewithal to immediately obtain emergency contraception after an attack, but he also has his own theory for why Planned Parenthood was established:

The number one cause of death for black people is abortion. ... One of the reasons you find most of their clinics in black neighborhoods is so that you can find ways to control that population.

Not only did Huckabee effectively dismiss the collective struggle of African-Americans with this comment, but he also claimed to be a victim himself:

I've dealt with race issues my whole life ... 35 years ago I fought them as a pastor when I integrated an all-white church and did so against death threats and so I understand how people have great passions but I also understand that the way you begin to resolve them is you do them by loving people and treating people with dignity and respect and you don't do it by magnifying the problems; you do it by really magnifying the solutions.

When I hear people scream, "black lives matter," I'm thinking, of course they do. But all lives matter. It's not that any life matters more than another. That's the whole message I think that Dr. King tried to present and I think he'd be appalled by the notion that we're elevating some lives above others.

Somewhere, Dr. King is rolling over in his grave, shaking his head, and face-palming.

Former Eagle Scout Scott Walker is keen on keeping the traditions of the Boy Scouts organization, even if those traditions were blatantly homophobic and discriminatory. When the Boy Scouts of America’s National Executive Committee voted to pass a new policy that allows gay adults to be employees and troop leaders, Walker told IJReview:

I have had a lifelong commitment to the Scouts and support the previous membership policy because it protected children and advanced Scout values.

Like Trump, Huckabee seems to have a proclivity for wholly inappropriate comments, but he's nowhere near as prolific. However, this zinger deserves a place right up there with Trump's most offensive comments. When asked if he would deny abortion to a 10-year-old who was raped by her father, he said:

I wouldn't pretend it’s anything other than a terrible tragedy, But let's not compound the tragedy by taking yet another life.

Basically, yes, he would deny her the procedure.

But how do you really feel about Obama's Iran Nuclear deal, Huckabee? He didn't beat around the bush when he compared it to the Holocaust:

This president's foreign policy is the most feckless in American history. It is so naive that [Barack Obama] would trust the Iranians. By doing so, he will take the Israelis and march them to the door of the oven.

Perhaps the single most damaging quote of Trump's career was made during his campaign announcement speech — you know, the one that goes:

Based on the extent of fallout Trump saw after saying this — oh, and the completely racist nature of the quote itself — this would have to be number one.