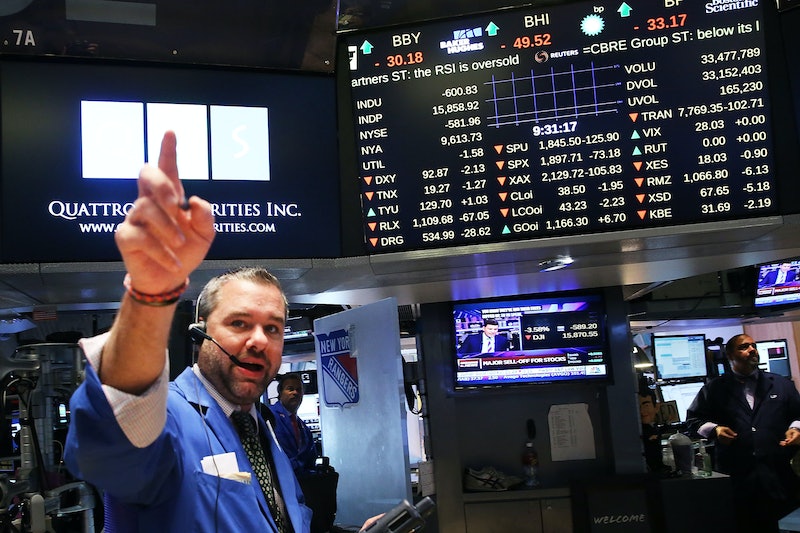 Due to an 8.5 percent drop in China's stock market on Monday, the Dow Jones industrial average plummeted by more than 1,000 points when Wall Street opened that morning. After a volatile day on the trading floor, the Dow closed 588 points down from the initial 16,459 points. Despite that recovery, that huge initial drop were the most points ever lost in a single trading day, beating out three well-known crises from the past 30 years.

"We have not seen this level of full-blown panic in markets for quite some time," Peter Kenny, chief market strategist at financial technology firm Clear Pool Group, told CNN Money. The extreme decline in the Dow was due to a change in China's stock market. The Shanghai composite index closed 8.5 percent lower than its original 3,500 points, dropping down to 3,210.80. An economic slump in China has lowered prices for oil and other commodities globally, which affects international stock values.

The Dow's sudden decrease was extreme, but it only represented a six percent drop — from 16,459 points to 15,871 — so while it suffered the most points lost in a day, Monday wasn't the worst day in Wall Street's history. However, it beat out three infamous stock market crashes that didn't see as big of a drop in points.

October 19, 1987, otherwise known as Black Monday, saw a record 22.6 percent drop in the Dow Jones industrial average. But at the time, that was only 508 points. Black Monday was the worst percentage drop in a single day, other than when the market reopened in 1914 after being closed for months during World War I. Multiple problems led to the crash, including the use of computer trading that automatically ordered large trades, and a lack of buyers to take all the stocks sellers were trying to get rid of.

October 2008 was one of the stock market's worst months in history, and the 22nd was the worst day of that month. The Dow saw a drop of 514 points, which represented a 5.7 percent loss for the day. A few months before the U.S. officially declared a recession, decreasing oil prices and a fear of a global recession led to the small-scale crash.

The last major stock market crash was on May 6, 2010, when the Dow fell 998.5 points in 10 minutes. The sudden drop represented nine percent of the original 10,868 points. But trading didn't stop, and the Dow closed with a loss of just 347.8 for the day. The Flash Crash was largely attributed to Navinder Singh Sarao, a trader, who was charged with 22 crimes, including fraud and market manipulation, in April.

More like this
When Did Tamagotchi Come Out? In The U.S., 25 Years Ago
By Kaitlyn Wylde
Using Your Pet’s Name As A Password? Here’s Why You Might Want To Change It
By Cristina Sanza
The 10 Best Waterproof Watches For Swimming
By Lauren Moison
How To Use The Crying Filter On Snapchat, TikTok, Instagram & More
By Emma Carey
Get Even More From Bustle — Sign Up For The Newsletter