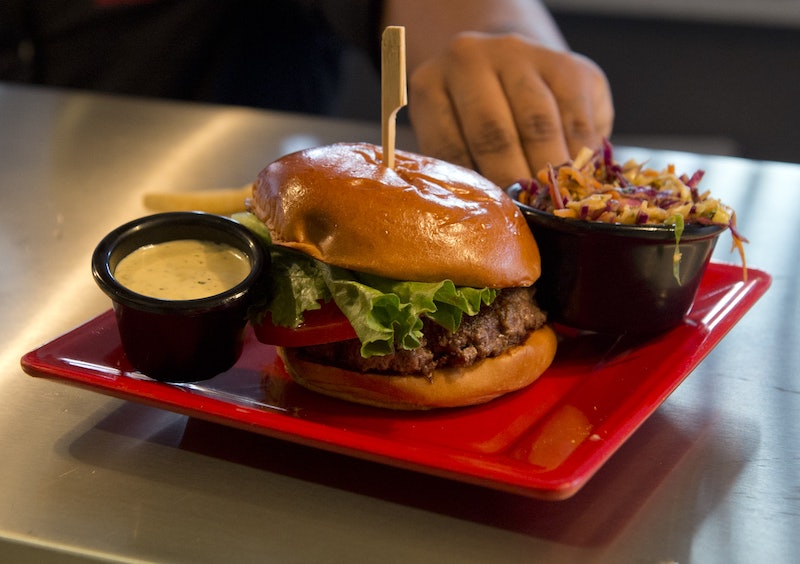 A true staple of summer is grilling out and enjoying a burger in the backyard. But right now, some scientists have got a beef with, well, beef. According to a new report published Monday in Consumer Reports, ground beef can be a lot less safe than you think — a study showed that much of it is tainted with bacteria.

Consumer Reports looked at 300 ground beef samples from all around the country and tested them for bacteria. They found that every single one of the samples contained at least one of five types of harmful bacteria: E. coli, Salmonella, Clostridium perfringens, Enterococcus, or Staphylococcus aureus. Of the 300 samples, 10 to 20 percent were determined to contain bacteria that could cause serious illness.

Americans consumed 25.5 billion pounds of beef in 2014, according to the National Cattleman's Beef Association. According to Consumer Reports, about 50 percent of beef is in the form of ground beef, putting America's consumption of it at about 12.75 billion pounds per year. The major issue is when there's bacteria in any type of meat and it's not cooked thoroughly. Hannah Gould, Ph.D, an epidemiologist at the Centers for Disease Control and Prevention (CDC), told Consumer Reports, "Up to 28 percent of Americans eat ground beef that’s raw or undercooked."

Undercooking aside, ground beef presents a particularly challenging issue. In other kinds of meat, like chicken or steak, bacteria is mostly contained in the outer layer. But since it's ground into little pieces, the bacteria in ground beef is spread everywhere. Its easier to kill bacteria through cooking when its just on the surface, as opposed to when it's in the middle of a burger.

But before you go vegetarian and swear off ground beef forever, know that there are ways to be smarter about your consumption. First, you can look at labels at the store. Another Consumer Reports article recommends that you buy beef from cows that were not treated with antibiotics. Really, read all the labels in the store, and be wary of wording like "no antibiotics used for growth promotion,” which doesn't guarantee the absence of antibiotics. The study found that, while 20 percent of ground beef from conventionally-raised cows had antibiotic-resistant bacteria, only nine percent of sustainably-raised beef contained such bacteria.

This means that the safest choice might be grass-fed organic beef. This guarantees that the cattle hasn't been given any sort of hormones or drugs, and have only been feed organically-grown grass, making the chance that it has these types of bacteria significantly lower.

Some other tips for the grocery store: Put beef in your cart last, so that it stays cool for the maximum amount of time, and pick a package that feels cold. The United States Department of Agriculture (USDA) recommends that you put the meat in separate plastic bags to avoid contamination, bring it home immediately, and freeze it.

When it comes to cooking steak, rare might be your go-to, but cooking your burger all the way could be the difference between getting sick or staying healthy. The USDA says that you should cook your ground beef at 160 degrees Fahrenheit, using a thermometer if necessary to measure the temperature.

So don't get too freaked out. Although ground beef can contain harmful bacteria, if you're smart about it, you can probably avoid getting sick.

More like this
How The City Healed Five Years On From The Manchester Arena Attack
By Ella Glover
Starbucks' Summer Menu Includes A New Chocolate Cream Cold Brew
By Emma Garza
Meet The Spice Company Founder Who Sees Chai As A Metaphor
By Madhuri Sathish-Van Atta
If Your Refrigerator Is A Mess, These 25 Organizing Products Can Help
By Courtney Young
Get Even More From Bustle — Sign Up For The Newsletter