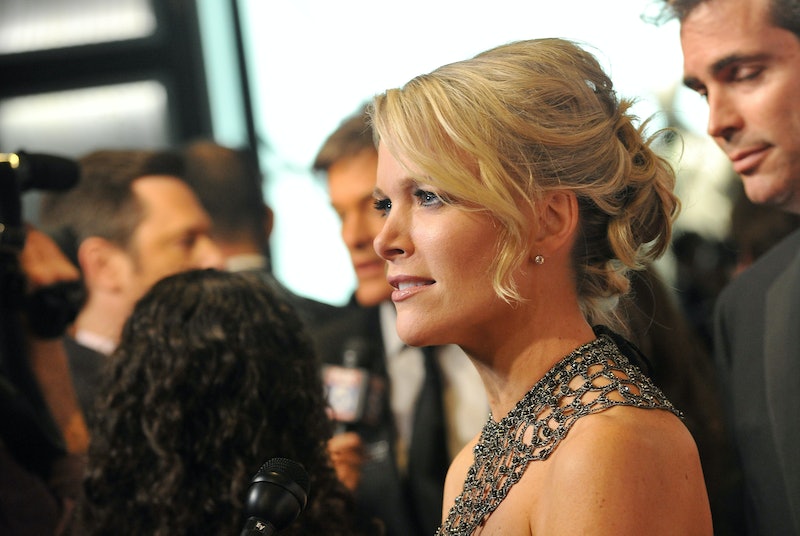 You probably know her as host of The Kelly File and co-moderator of the first Republican debates earlier in August (she'll co-moderate again in January). During that key first debate, she memorably asked hard-hitting questions — including asking Trump about his comments about women, which, of course, prompted an utterly tactless response from the Donald. But Megyn hasn't always been in media: in fact, Megyn Kelly had a totally different career before Fox.

Before becoming a media powerhouse, Kelly was a lawyer. According to her bio on Fox News' website, Kelly spent nine years as a corporate litigator at Jones Day and worked as an associate at Bickel & Brewer LLP's Chicago office. She graduated from Albany Law school in 1995 with honors, and worked as editor of the Albany Law Review.

But, according to The New York Times Magazine, Kelly always had dreams of working in media. When she originally applied to Syracuse for her undergraduate degree, she hoped to get into the communications program, but was not accepted and majored in political science instead. After serving in her student senate inspired her, she went to law school.

Kelly told Business Insider last year that after ten years, she was done with law, noting:

I started off as a lawyer for almost a decade before I decided I was completely burned out. When choosing a new profession, I just said to myself: 'What can I do that would utilize some of these skills, but that I would enjoy a little more and will also be fun and still intellectually stimulating?' And this was an obvious choice.

From there, according to the Times Magazine, Kelly made a demo tape in 2003. After cold-calling stations, she finally got the attention of Bill Lord, the manager of a ABC affiliate station in Washington, D.C. Lord told the Times Magazine he was reluctant to hire someone with little experience but because she was so impressive, he did it anyways. He told the magazine, "She was very intelligent, there’s just no getting around it ... She was enormously confident. She seemed very, very motivated. She had ideas."

When she sent her tapes into the Fox News Washington bureau, Kim Hume, the bureau's chief, was impressed. She showed the tape to her husband and senior political analyst, Brit Hume, who described it to TIME:

She was a lawyer and new to the business, but her tape displayed as full a set of the qualities of a network correspondent as I had ever seen: great looks, strong voice, authoritative yet cheerful presence and obvious intelligence. In other words, limitless potential.

According to TIME, there were no open jobs at the time, but after Hume showed Fox executives the tape, she was hired regardless. Kelly had broken into the big leagues of media, and she was there to stay.

More like this
Dinner To Celebrate Diversity In Journalism Brings Out Media Leaders
By Brianna Kovan
Celebrities & President Biden Are Enraged By The Leaked Roe v. Wade Decision
By Alyssa Lapid
Sandra Bullock, Girlboss Extraordinaire
By Matt Harkins & Viviana Olen
23 Abortion Funds In States With Trigger Bans To Donate To
By Emma Carey
Get Even More From Bustle — Sign Up For The Newsletter