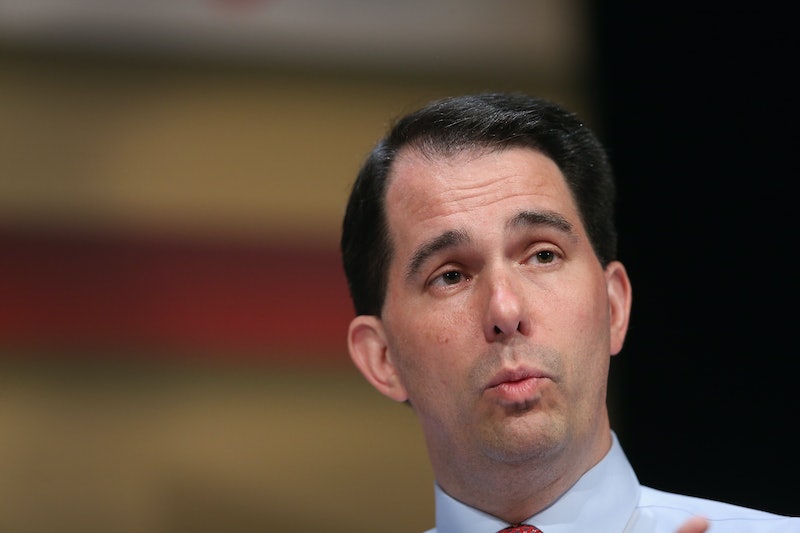 Wisconsin Governor Scott Walker is running for the Republican presidential nomination, and he makes it abundantly clear that he enjoys the phrase "lady patriots." On Monday afternoon, he tweeted an advertisement for campaign T-shirts "made especially for our lady patriots supporting Scott Walker," featuring an image of a barefoot woman jumping for joy — though why a woman would jump for joy at the thought of Walker as the country's next president is unclear.

It's not the first time Walker has tweeted this ad — he tweeted something similar last month, in which he promoted "offical" [sic] campaign gear (spelling the word "official" wrong in the image to promote the shirts). But Walker is no ally to women: as Wisconsin's governor, he has cut reproductive health care access, was opposed to an increased minimum wage, and has supported the downfall of unions, all of which should concern feminists. He is trying to make himself seem like an appealing candidate for women, but after repealing an equal pay law and requiring women to get ultrasounds before getting abortions, he is hypocritical at best.

Walker's patronizing "lady patriots" tweets and campaign gear aren't going unnoticed, though — people have taken to Twitter to point out his hypocrisy and draw attention to how his policies have negatively impacted women.

His anti-abortion stance — and belief that, for some reason, he has a say in women's personal decisions about their bodies — was also not overlooked.

Oh, and by the way, the shirts Walker is advertising come with a footnote: Order two sizes up, because they "run small."

Scott Walker's use of the word "lady" is outdated, condescending (can't you just imagine him chiding women for daring to involve themselves in political conversations because it isn't "ladylike"?), and inappropriate. If he wants to appeal to female voters, he's going to have to do a lot more than make two-sizes-too-small T-shirts; he's going to have to accept responsibility for the hardship through which he's put Wisconsin's women and be held accountable for it.

Last year, for instance, he ran an ad supporting equal pay — despite having previously repealed a law that would make it easier for victims of wage discrimination to take their cases to court. This indicates that he'll say anything in the public sphere to make a point even if his actual policy decisions don't support his claims. It's no surprise, then, that Twitter has taken this as an opportunity to poke fun at him.