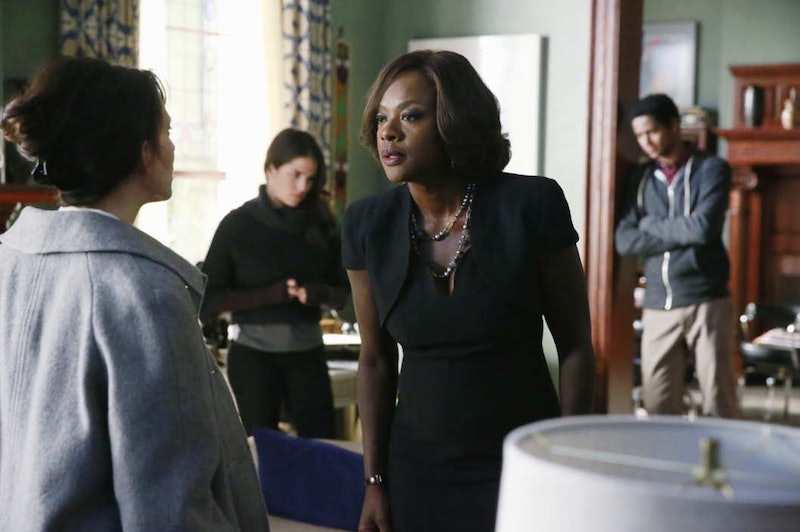 Few shows have gotten under my skin in the same way that How To Get Away With Murder did during its first season. Season 1 of How To Get Away With Murder gave us a double murder-mystery: not only were we tasked with uncovering who killed college student Lila, but we also needed to learn which one of Annalise's law students killed her husband Sam. Those are two huge questions for one season, and it seems that the mystery train is rolling at full speed ahead — at least, according to star Viola Davis. Davis' interview with Deadline revealed what to expect from Season 2 of How To Get Away With Murder and instead of beginning the season with questions, fans will be getting plenty of answers.

Here's what Davis said of the new season of the ABC series:

One thing I can share with you is it starts off with a bang. A lot of the mysteries will be solved and answered, and then absolutely a new one will be presented. It’s just so complicated and fascinating, and that happens in the first episode.

Could Davis' interview refer to the mystery set up at the end of the season? It certainly seems likely, considering Season 1's jaw-dropping conclusion, which posed plenty of questions. When we last left Annalise's students they had just put Rebecca through a make-shift "trial" in order to decide whether she was truly innocent of killing Lila. Though the group never finds out who killed Lila, a flashback reveals that it was actually Annalise's assistant Frank, on orders of the now-dead Sam. But while Rebecca isn't a criminal, she does become the show's next victim: after her trial, an unidentified person in the house secretly murders Rebecca and puts her body under the stairs.

While we have our answers about Lila (even if the Keating Five do not) we still have no clue who could have murdered Rebecca or why. If the show is getting ready for some major reveals, then discovering the identity of Rebecca's murderer is the biggest. While many fans expected the mystery of Rebecca's death to be the crux of the new season, it may not be the case. Rebecca's murder could be "solved" for the audience when the series returns, but fans may still have more questions about what really happened and why. In keeping with the style of Season 1, the show could use the same storytelling devices it did with Sam's murder. A non-linear storyline with ample flashbacks could reveal the murderer without also revealing the reason behind the crime.

Season 2 of How To Get Away With Murder premieres Thursday, Sept. 24, so we have some time before we can uncover the truth — luckily, Davis' description of the new season makes it seem well worth the wait. Let's hope that the mystery-drama can provide the same level of nail-biting tension in its new "whodunnit" game as it did with its first. I'm ready to dive head first into a new mystery, and can't wait for Annalise and the Keating Five to lead the way.

More like this
50 Years After Creating Her Alter Ego, Angelyne Is Still Driving That Pink Convertible
By Gretchen Smail
'Atlanta' Season 4 Could Be Here Sooner Than You Think
By Kadin Burnett
Conversations With Friends' Endometriosis Scenes Are As Brutal As It Gets
By Ivana Rihter
Grey's Anatomy Fans Refuse To Accept Kaimelia's Shocking Relationship Update
By Brad Witter
Get Even More From Bustle — Sign Up For The Newsletter