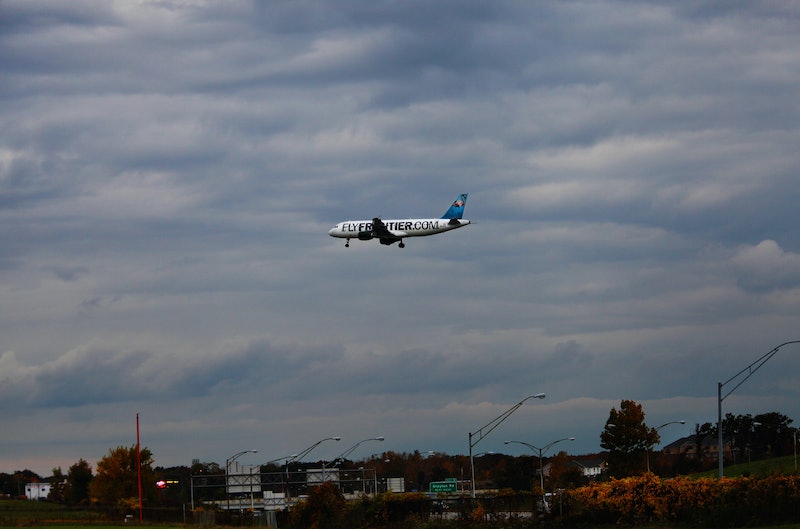 The 2016 campaign season has barely begun, but businesses are already cashing in — like Frontier Airlines, for example, which is offering a discount Frontier Airlines promotion based on fake candidate Deez Nuts. Nuts made national headlines when he pulled in 9 percent in a North Carolina poll, pitting him against Donald Trump and Hillary Clinton. And now, Nuts' supporters can capitalize on his traction to get low airfare!

The ad, which read "Deez fares are nuts!" offers 50 percent off of tickets by using the promotional code DEEZNUTS. Restrictions apply, of course, but it's a kinda-sorta endorsement for the candidate, who is actually a 15 year old Iowan named Brady Olson. In late July, Olson filed paperwork with the FEC registering the internet meme Deez Nuts as a presidential candidate. Since then, the campaign has taken off, and according to TIME magazine, Nuts is pulling in the best numbers of any third party candidate in almost two decades.

Olson was unmasked by The Daily Beast last week, but no one seems to mind that Nuts isn't exactly a real candidate. His Facebook page has gained dozens of supporters, t-shirts are in the making, and volunteers are helping to get Nuts included as a write in candidate on state ballots. The future looks bright for Nuts. Or Olson. Whatever.

Deez Nuts has not yet commented on the airline's endorsement.

According to The Hill, Frontier Airlines, a budget airline that once sold $15 seats, is not the first to run political promotions. Competitor Spirit Airlines used buzz about 2012 candidate Herman Cain's 9-9-9 deal, and in 2013 ran a promotion called the Affordable Fare Act.

Unfortunately for Nuts, he's not the only candidate that Frontier Airlines is capitalizing on. Another promotional campaign featured a squirrel wearing a cap saying, "make fares in America great again." Trump's slogan, of course, is "Make America Great Again." It's unknown if the Trump campaign has issued them a cease and desist order for sort of using its slogan.

Though presidential campaigns can get tiresome, it is nice to see something positive coming out of the political arena. Even if it's just cheap airfare.

More like this
Michigan’s Governor Is “Going To Fight Like Hell” To Protect Abortion Access
By Andrea Zelinski
What Is Barack Obama’s Net Worth? He Makes *Way* More Now As An Ex-President
By Hugh McIntyre
How To Fight For Reproductive Rights, Based On How Much Time You Have
By Courtney Young
LGBT+ Men Fleeing Afghanistan Were Denied Asylum By The Home Office, New Findings Show
By Sam Ramsden
Get Even More From Bustle — Sign Up For The Newsletter