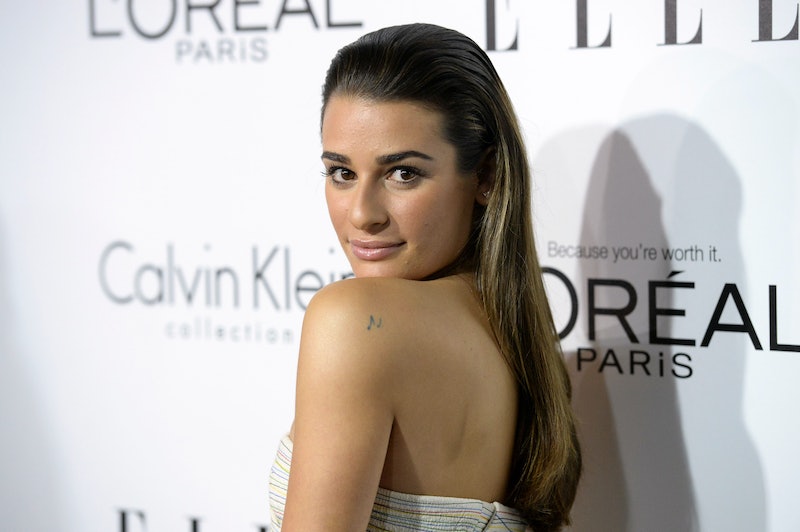 It's been five months since Cory Monteith was tragically found dead in a Vancouver hotel room due to a drug overdose, and his girlfriend and Glee co-star Lea Michele has understandably remained fairly quiet in the media since. However, in a new interview on The Ellen Degeneres Show Thursday, Lea Michele opened up about the tragic death Cory Monteith, and how she dealt with her grief in the months following with the help of her friends and Glee guest star Kate Hudson.

"It's certainly been a pretty rough year," Michele told Degeneres, "But I've been surrounded by such great people, such great family."

Michele went on to explain how much Hudson helped her, going so far as to offer Michele her home as a sort of safe house for her to stay in the weeks following Monteith's death. "She was so wonderful to basically give me her home to myself and my family... it was so helpful to just, basically, have a safe place to process, and just have a minute to just breathe before getting back to my house with just has a lot of memories and stuff. So being some place else to just have a moment was really nice," Michele explained.

"It's just really hard. There's so many different emotions and to kind of have people watching every step of the way," she continued. "But to have that time at [Hudson's] home to just really be in private with this for a moment — before getting back to work and before going home — I'm just so thankful to her."

The Glee star also brought up Monteith's own appearance on the Ellen show nearly exactly a year ago — Dec. 6, 2012 — when he officially confirmed that he and Michele were dating. "It's one of my favorite memories," she explained. "I remember when he came home that night, he kind of puffed out his chest and he was like, 'I talked about you on Ellen today.' I was so happy. He's such a private person, and I literally lived every day of my life feeling like the luckiest girl in the whole world. I just thought he was the greatest man and so at that moment, that memory, it means so much to me."

The clip she's referring to, if you haven't seen it, is this one here. (Get ready for tears to stream down your face.)

Michele is, however, admirably staying strong and moving forward with her life: Her debut album, Louder, which has been in the works since 2012, is finally due out on March 4, 2014.

You can check out the full clip of Michele's appearance below.