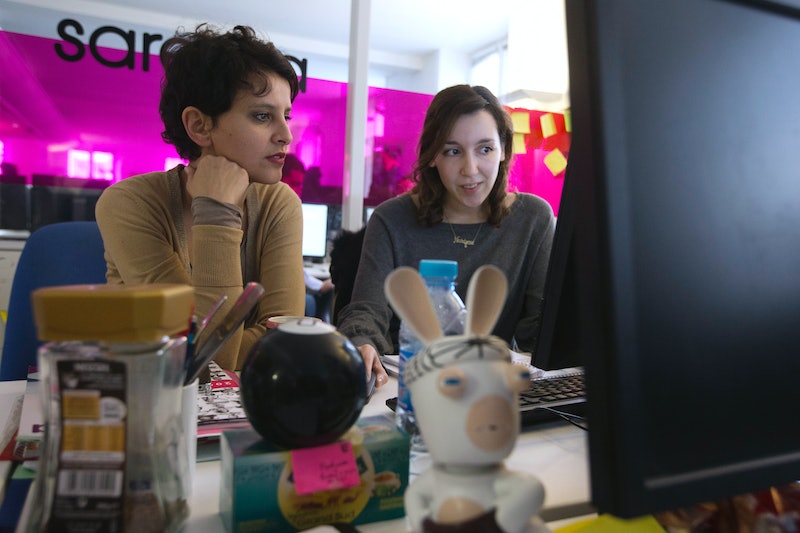 Ladies, we need to be a little kinder to each other, especially when it comes to what we wear to work. According to a recent study in the scientific journal, Sex Roles, women who dress sexy at work are seen as less competent by their fellow women co-workers. Sadly, it seems like things haven't changed since high school. #Meangirls all around.

This whole perception hearkens back to 1990 when Professor Sandra M. Forsythe conducted a study on 109 subjects who were required to watch four separate videos of four different women wearing outfits that had different degrees of masculinity. The subjects were required to rate each woman on how likely it was that they would hire her for a managerial position. The results came out to show that both men and women voted for the women with more masculine attire. And according to Business Insider, "the women who were more masculinely dressed were are also seen as more forceful and aggressive."

In the legal blog, Above The Law, there is a five-page-long memo called "Presentation Tips For Women." It's filled with advice that says, "Make sure you can stand in your heels, not trip, don't rock back on them," "Wear a jacket, not a sweater," and even goes on to state how, "No one heard Hillary the day she showed cleavage." While you might want to punch the writer in the face, according to the recent study (and all studies conducted about women's work attire, in general), there is truth to it. Harumph.

Thankfully, I think this whole perception is beginning to die down as startup culture is rising. The whole idea that you can dress how you want as long as you produce quality work has almost thrown the idea of having strict business-professional dress codes out the window. But unfortunately, the innate human inclination of judging someone based on what they wear is not nearly close to dying out.

I have a high school friend who was known for her adorably, super high-pitched voice, bubbly personality, and bright smile. Now that she works full-time for tech company Cisco, in the male-dominant world of the Silicon Valley, she told me that she's consciously lowered her voice and corrected her posture in order to gain respect from her male co-workers. As expected, she did begin to receive more respect and more recognition.

Is it too much to ask to be judged based on our work and what we accomplish rather than what we look like and what we're wearing? Looks like we all have an uphill battle to fight together, but at the very least, we can start with ourselves. Ladies, let's be less mean and judgmental with one another, please?

More like this
Machine Gun Kelly Wore A $30K Diamond Mani To The BBMAs
By Paris Giles
How To Master Baby Braids, According To TikTok
By Tomi Otekunrin
What Is “Jello Skin”? The Latest Viral Trend To Know About
By Tomi Otekunrin
Glossier's New Skincare Product Smells Like Spring
By Tomi Otekunrin and Jessica Morgan
Get Even More From Bustle — Sign Up For The Newsletter