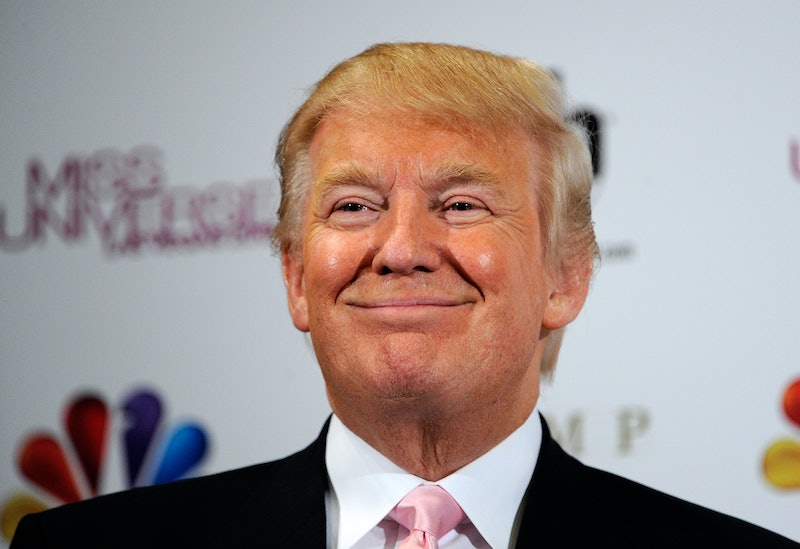 At this point, we're all weary of GOP front-runner Donald Trump saying, doing, or tweeting completely inappropriate things. After a summer of hearing his name linked with all sorts of xenophobia, misogyny, and general ignorance, personally, I was annoyed but not even the slightest bit phased upon hearing he'd made an attempt at a period joke. Nonetheless, there have certainly been times when Donald Trump's trolling was too bizarre to ignore, even for him. By now, we've pretty much accepted that Trump is a relentlessly racist, POW-hating misogynist, but even so, some of his words and deeds, this past summer and beyond, remain unbelievable.

If anything Trump says or does still outrages you, it probably wouldn't if you knew there was a time in the not-so-distant past when he was the most vocal birther in the country, or if you were even a bit familiar with his Twitter account. You should not only take in Trump scandals without batting an eyelash, but also focus your attention on a presidential candidate who actually deserves it. Why? Because anyone with a history of trolling as colorful as Trump's simply cannot be taken seriously.

This is a race for the most important position in the nation, not a competition to see who can make the most headlines or give comedians the most material. If ever there was a person whose actions could prompt you to say, "I cannot make this stuff up," frankly, it would be the Donald himself, and here's proof.

It's been quite a long time since Donald Trump's last barrage of pro-birther comments. In case you missed it throughout the past almost seven years of President Obama's administration, birtherism is the far-right conspiracy theory that Obama was born in Kenya, raised in Indonesia, and the birth certificate he provided is "a fraud." But don't take Trump's relative silence on the issue to mean he actually recognizes how racist and idiotic the theory is. As late as July 2015, he still "really [doesn't] know" if Barack Obama was actually born in the United States, but insists Democratic front-runner Hillary Clinton and Arizona Sen. John McCain share, or at some point shared, his sentiments.

"Do you know that Hillary Clinton was a birther? She wanted those records and fought like hell. People forgot. You know that John McCain was a birther, wanted those records. They couldn’t get the records. Hillary failed. John McCain failed," Trump told CNN, and because not even speaking in third person could make him sound more ridiculous at that point, he continued, "Trump was able to get something. I don't know what the hell it was, but it doesn't matter." No, Trump, it really doesn't.

At any rate, Obama responded to Trump at the 2011 White House Correspondents' Dinner by proving that he, too, is capable of playing the Game of Trolls. See for yourself in the video below.

Kidding, kidding — does Trump ever tactfully explain anything? In a reposted tweet that Trump very quickly went on to delete, he essentially reasoned that Bill Clinton's infidelity should serve as automatic grounds for disqualifying Hillary Clinton from the presidential race. When the Donald himself is actually able to recognize something as inappropriate and delete it, you know it's complete filth.

In response to Lindsey Graham calling him a "jackass," Donald Trump pulled out the big guns. Well, he actually pulled out a paper with Graham's phone number written on it and read it to audience members at a rally in July, but same thing. Graham responded to this by releasing a video of himself destroying a cell phone in all kinds of crazy ways — with a blender, golf club, butcher knife, you name it.

The whole series of events was certainly comical, though, granted, in a very bizarre way. But it should also drive home the point that Trump is simply incapable of the professionalism and courtesy required of a POTUS. Whatever beef you might have with a public official, there's absolutely no justification for giving out his/her private phone number.

The One Where Somebody Was "Doing The Raping"

Trump's statement from his presidential announcement that most immigrants from Mexico are rapists, drug dealers, and murderers, is probably his most famous — and his most downright ridiculous. Why didn't it make this list? Because frankly, the justification he provided for this statement, although less famous, was even more ridiculous.

The single article Trump was able to cite to back up his allegations was entirely irrelevant. It discussed the issue of rape in Mexico, not in the United States, and certainly didn't provide statistics comparing rape by known illegal immigrants with rape by citizens in America. When called out on his flawed logic, Trump deflected, and merely yelled, "Somebody's doing the raping! Who's doing the raping?" Enjoy his shrill, paper-thin self-defense in the video above.

The One Where Trump Vowed To Win The Latino Vote

Given the last example, I really don't think I need to explain why this was some of his most ridiculous trolling to date.

The One Where Trump Only Liked People Who Weren't Captured

In case you were wondering why John McCain is considered a war hero, as it turns out, it's not because of his years of brave service in the armed service. According to the ever credible Donald Trump, the only reason we recognize McCain as a war hero is that he was captured, and FYI, Trump only "[likes] people who weren't captured," so, sorry McCain!

To be fair, Trump doesn't actually determine who he likes and doesn't like based on whether they're "winners" or "losers." He determines this based on whether or not they're stupid enough to say nice things about him, and since McCain wasn't, unfortunately, we can no longer recognize him as a hero.

The One Where Megyn Kelly Had Blood Coming Out Of Her, Whatever

Her nose? Her ears? Of course you were thinking one of those two, because if, God forbid, you were actually thinking Trump meant her vagina, you're a complete "deviant," according to the Donald. After Megyn Kelly attempted to force him to answer for his long history of sexism at the first GOP debate, a thoroughly embarrassed Trump took to the Twitter-sphere to throw one of his signature tantrums, reposting a tweet that called Kelly a "bimbo."

He went on to out-Trump himself by implying that Kelly had been menstruating during the debate, in an interview with CNN, because of course if a woman is unreasonable enough to call you out on your gross misogyny, she must be on her period. At any rate, Trump's GOP rivals, being the ardent feminists and champions for women's rights that they are, proceeded to reprimand him.

Oh, yeah, and to ice this cake of pure ridiculousness, Trump went on to assert that Megyn Kelly owed him an apology.