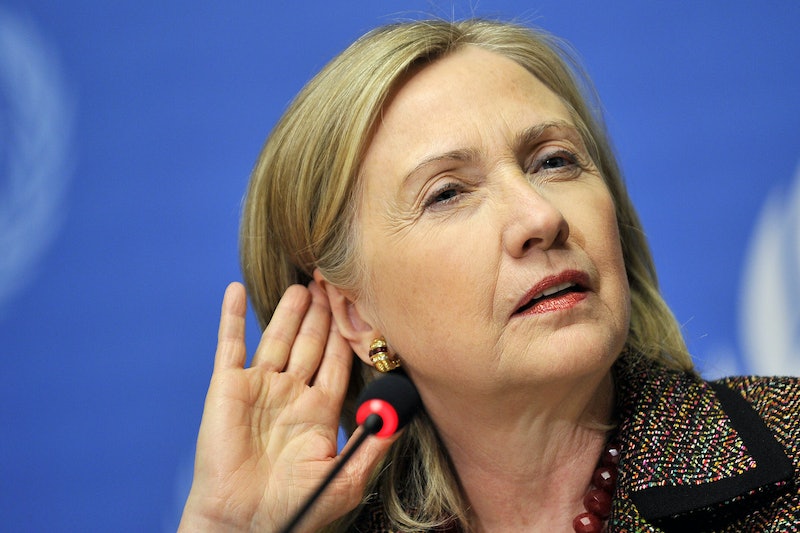 In simple terms, the Equal Rights Amendment, written by the feminist heroines Alice Paul and Crystal Eastman, was designed to guarantee equal rights for women. The ERA was introduced to Congress for the first time in 1923. Its three sections read:

Section 1. Equality of rights under the law shall not be denied or abridged by the United States or by any state on account of sex.

Section 2. The Congress shall have the power to enforce, by appropriate legislation, the provisions of this article.

Section 3. This amendment shall take effect two years after the date of ratification.

Beyond its origins and definition, the ERA and its history start to get pretty complicated. But no amount of complexity and historical conflict could diminish how revolutionary, and how beautifully feminist, the amendment was and is. It's important to note that the 19th amendment is certainly important, but it was historically passed based on well-meaning misogyny. Progressive lawmakers reasoned that women were inherently more virtuous than men, being loving, submissive wives and mothers, and would therefore be able to clean the increasingly corrupt electorate. Others supported it because they presumed it would only help men, as women were inherently incapable of forming their own opinions, and most would probably vote the same as their husbands, anyway. On the other hand, the ERA was dedicated to fighting the very prejudice and discrimination present in both of these contemporary explanations of the 19th amendment.

And yet shockingly enough, the ERA seemed to rouse more unrest and conflict among feminists than it did any other demographic, which led historian Judith Sealander to describe the situation as "feminist against feminist." Famous conservative Phyllis Schlafly was the most vocal opponent of the amendment, which many historians believe was set to pass fairly easily, were it not for her aggressive campaigning, according to Liberty, Equality, Power: A History of the American People.

Schlafly campaigned against the ERA by claiming to be a supporter of women's rights. She and the ERA's many female opponents feared the ERA would eliminate protective legislation, or laws that provided female workers with better working conditions than men. They also feared the ERA would make women vulnerable to the draft.

What Schlafly's arguments got wrong was that the ERA in no way condoned the gross working conditions many male laborers were forced to work under. Progressives who supported the ERA didn't want the "protection" the female work force enjoyed to be taken away — if anything, they wanted men to enjoy basic human rights, too. In many respects, society continues to get this wrong: Empowering women doesn't take anything away from men or women — it only gives.

But beyond the issue of protective legislation, the military draft was also a focal point of Schlafly's opposition to the ERA. The protests she led generally involved powerful imagery of children being robbed of their mothers, who were drafted and sent to fight in wars. However, Schlafly's perspective, which is also the perspective of many modern anti-feminists, is flawed in that it views the draft as a gender issue instead of the human rights issue it arguably is. Should any human being, man or woman, be forced to fight in a war they are morally against, die for a cause they don't believe in? Feminists largely oppose the draft for women as much as they oppose it, for men.

Still, many opponents of modern feminism often frame their arguments around Schlafly's flawed logic as they often ask: Why are women protesting against a culture that gets them free drinks at bars, free dinners on dates, admission into clubs, and most notably to these opponents, an out from the military draft? Why do women want equality when they enjoy so much female privilege? To these questions I would answer that all of the societal norms listed off above are inventions of patriarchy, a force in our culture that feminists are fighting against, not siding with.

The ERA was introduced in every Congress from 1923 unsuccessfully until 1972, when it was passed and sent to the states to be ratified on a seven year deadline. In 1979, when only 35 of the 38 states needed for the amendment to be written into the Constitution ratified it, the deadline was extended to June 1982. But when this time came, the amendment remained three states short. Every year since 1982 has seen the ERA introduced to Congress, and the passage of the ERA is a cause all feminists should rally behind.

Arguably, in the 21st century, we need the ERA now more than ever. Women are aspiring to succeed in male dominated fields in unprecedented numbers — the first two women in history just graduated Army Ranger School, the last thing they need to face is gender-based discrimination. Simultaneously, more and more men and women are rising against double standards in law enforcement, standing behind the Free the Nipple movement to protest women, but not men, facing charges for public toplessness. The ERA could also do wonders for men and women increasingly calling out double standards in how male rape victims are treated by law. Our nation's enduring need for the ERA hasn't gone anywhere: If anything, it's grown.

Women's Equality Day on Aug. 26 celebrates something incredible: the anniversary of the day the federal government gave women their long-overdue right to vote. But at the same time, it serves to remind us that the gender equality movement still has a long way to go. It's been almost a century since the Equal Rights Amendment was first introduced, and it has still yet to actually be passed. If it's this difficult to get gender equality into the Constitution, imagine how difficult it's going to be to get gender equality into society.