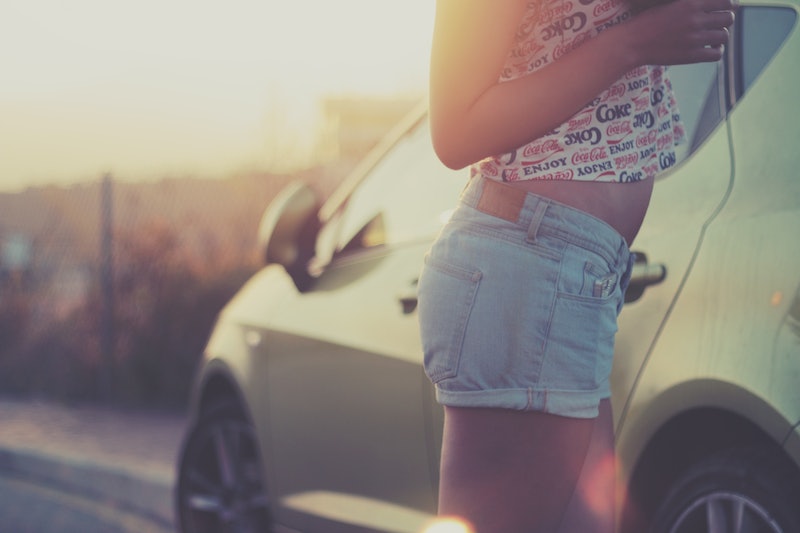 Did you know that the term for your first period is "menarche"? It's pretty catchy, particularly as opposed to "a seriously stressful event that likely involves at least one panic attack and/or mystification about tampons". (I did NOT know how to put the damn thing in.) Menarche — pronounced MEN-ar-kee — is likely a distant memory for you if you're in your mid-20s now. But science tells us that the age at which you first got your period (or visit from Aunt Flo, monthly gift, Eve's curse, whatever) can be an indicator of many things about your life, nutrition, and even future health.

Menarche has been significant in many cultures for centuries. It's a pretty major event — it signifies a girl "becoming a woman," or entering puberty and her child-bearing years. Medical Daily reports that communities in several countries, including Sri Lanka and Ghana, have lavish menarche ceremonies to celebrate the occasion. More bizarrely, Ritualwell, which records Jewish rituals across cultures, reports that some Orthodox Jewish women will be slapped across the face by their mothers when their first period happens. (It's supposed to be in the hope that the slap will be the worst pain you ever experience as a woman, apparently.)

But it turns out that the specifics of your menarche may say more than you realize. First period age is influenced by a huge amount of factors, including up to 100 genes in your body. The average age of first period in the Western world has been getting lower, from an average of 17 over a century ago to around 13 today. That may be partially due to better nutrition, which means that we weigh more at a younger age, and thus our bodies can cope with childbearing earlier. But researchers are still arguing over whether it might also be due to genetic changes, more hormones in our food, or other environmental factors. Either way, it seems that your first period can be a big factor in your life. So what does it mean?

An Early Period May Indicate An Unsettled Childhood

It's true that our age of puberty is heavily linked to that of our female relatives. Chances are very high that you'll get your menarche at the same time that our mom, grandmother, aunts, and sisters did. But there are other factors that might be at play. And according to psychologists, one of them is whether you had enough parental care as a child.

According to a collection of studies on the topic by Psychology Today, lower levels of parental attention, support, sensitivity, and emotional security directly lead to early-onset puberty. Alas, that includes divorce and life as the child of a single parent. However, in those cases, if life is more settled afterwards and parents get more supportive, loving new partners who pay attention to kids, then age of menarche becomes average again.

This kind of makes sense from an evolutionary perspective. If you can't rely on your family to take care of you, then your body will make you capable of finding a mate and starting your own family as soon as possible. According to a huge UK study done in 2010 of 80,000 women, early menarche is also associated with low birth weight, exposure to smoking, lack of exercise as a kid, and childhood obesity. So basically, if things are a bit rubbish or unhealthy when you're a kid, your body tries to make you an adult ASAP.

This is an interesting factor that hasn't been fully explained: Race does seem to have a genuine impact on your menarche time. The difference isn't great — in the U.S., the average age of menarche is 12.88 for white girls and 12.16 for African American girls. And statistics place the average for Hispanic girls somewhere between those two.

But why? A study in 2003 found that it didn't have anything to do with one race weighing more than another, or differences in BMI. Socioeconomic variables don't explain it, either. One idea, raised by a 1999 study, is that it's about the presence of a certain protein in the body. African American girls have higher levels of IGF-1 (insulin-like growth factor 1), a protein that has a huge influence on how fast we age and mature. A bigger IGF-1 dose may just mean that one's body grows up faster.

So far, so OK. But what happens if your menarche happens way outside the normal range? Say, before the age of 10, or after 17? The bad news is that, if you ask a study published in 2014, abnormalities in your first period age are indicators of a nasty possibility in adulthood: heart disease.

The scientists observed a whopping 1.3 million women to see what impact having a seriously early or late period might have on heart health. The results aren't stellar: If you fall into either of those abnormal menarche groups, you're 27 percent more likely than normal period-starters to be hospitalized for or die from heart disease. The researchers think that it's because weight problems (under and over), and corresponding pressure on the heart, can push menarche in radically weird directions.

Getting A Period Before Age 12 Is Linked To Breast Cancer

The hits just keep on coming. If your menarche came before the age of 12, which is around the national average, you need to get tested for breast cancer frequently. Statistics show that, nastily enough, a pre-12 menarche has been linked to a 20 percent higher likelihood of a breast cancer diagnosis at some point in later life. The general rule is that for every extra year a woman menstruates before the average, you can add five percent to her chances of developing breast cancer.

According to a new study from the University of Oxford, this also means that the later a woman finishes having periods (when she enters menopause), the more at risk she is. The research also showed that a more period-filled life is actually linked to specific kinds of breast cancer: estrogen-sensitive cancer and lobular tumors.

The big factor in this? Exposure to hormones. It looks like the more estrogen and period-causing hormones you experience over your life, particularly at your menarche, the more likely it is that your body will develop breast cancers that are hormonally sensitive. Interestingly, though, the age of menarche has no influence on when you'll hit menopause; the two things are completely independent.

Let's finish on something that will be easily evident to anybody who ever went to junior high. The earlier you get your period and start developing breasts and pubic hair, the earlier you're likely to start dating and having sex, according to researchers. It doesn't take a genius to figure that one out. And unsurprisingly, the information came from a survey of 15-to-19-year-old girls at American high schools. It makes perfect sense: "Blossoming" means both more attention from potential mates and more interest in them yourself. (Though only if there's a cooperative parent willing to let you get ice cream with Brett on Friday afternoon.)

Unfortunately — but also obviously, alas — girls who'd experienced radically early puberty also reported higher levels of bullying, ostracism, depression, and socially aggressive behavior, according to the University of Michigan. They're also more likely to develop substance abuse problems later in life. Part of that is easily explained: They're badly treated because they're different. Breasts that will become status symbols later are targets when you're 13.

The study that initially tracked the behavior problems speculated that the reason for this was a combination of factors. Societal pressure plus a cocktail of sexuality steroids creates more hyperactivity and aggression. Altogether, not fun.

Either way, it looks like the later you got your menarche, the better off you are health-wise — but that early birds got a societal advantage by learning the ropes of dating and sexuality sooner. So perhaps it's a trade-off after all.

Remember all those ridiculous things about sex you believed as a child? We rounded up our favorite sex myths right here: