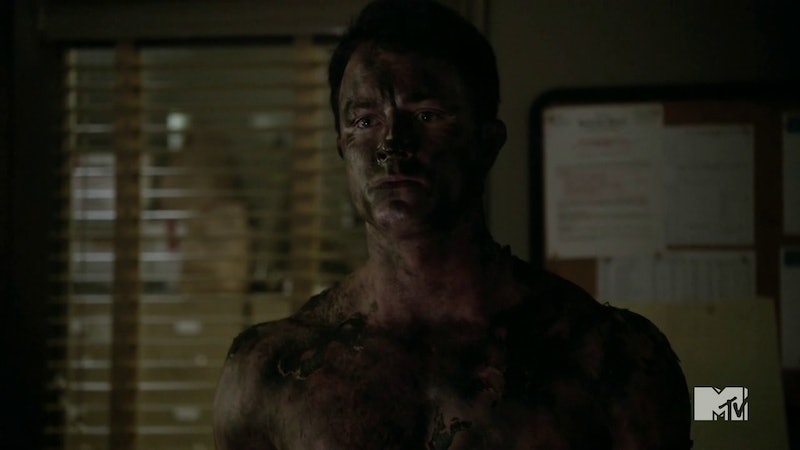 The moment we've all been waiting for has finally come. On Monday night's Season 5 summer finale, Teen Wolf revealed that Parrish is a Hellhound after Lydia realized the connection between the Deputy and the Wild Hunt myth that Kira told her about during the big storm of the premiere. But the problem is, Parrish and the rest of the pack have yet to figure out this truth, because as soon as Lydia discovered it, she was kidnapped by Theo and held prisoner in the Dread Doctors' secret lab/lair/basement. And to add injury to more injury, Theo then essentially lobotomized Lydia to find the Nemeton and resurrect the dead chimeras, seemingly putting her in the catatonic state we saw from her in Eichen House in the Season 5 premiere. That means the only person who knows Parrish's supernatural identity (besides Theo) is incapacitated and locked up. Now how will everyone — including Parrish — discover the truth? And what does this mean for the future?

Before Lydia ran off to reaffirm her theories about Parrish's identity, she told him about the Wild Hunt myth, so he may be able to discover the truth thanks to Lydia's guidance. But what about everyone else? If Lydia is unable to talk, who else can let Scott's pack know what's going on with Jordan? Stiles tries to follow him after seeing him escape the sheriff's station, so he might know a little bit about Parrish's activities and is smart enough to figure out his identity and what he's doing. And what he's doing was another important part of the Teen Wolf midseason finale, as he was bringing chimera bodies to the Nemeton to be resurrected. what will Parrish's Hellhound side do in response?

Teen Wolf creator Jeff Davis spoke with TVLine after Monday night's midseason finale, addressing mostly Parrish's future as well as some of the other epic moments of the finale and how they will all affect Season 5B. He explained that Parrish is neither a good nor a bad guy in the realm of Teen Wolf as we know it, saying that the Deputy simply has a "place in the supernatural submitted" of Beacon Hills. Davis also said that Parrish would discover "exactly what he’s been doing and what his role is" in Season 5B, meaning that he will definitely be important to the upcoming story. Considering the Season 5 summer finale ended with the Dread Doctors looking at a mural of what Davis describes as a "clash of the beasts," and he also stated that the beast "surrounded by fire" is someone we know, perhaps we can start theorizing that it represents Parrish.

Could Parrish be the creature that Scott and his pack need to defeat the Hellhounds and Theo's newly created chimera pack? I think Parrish will need to learn to trust all of Scott's pack (even if they're scattered and crumbled at the moment), and work with them, especially if the Dread Doctors have their sights set on him for the future Wild Hunt clash. But after seeing how much damage Parrish's Hellhound side is willing to do to his own people in the sheriff's station and the hospital, who knows if the Hellhound side can even be controlled enough to work together with other supernatural creatures? It's time for Parrish to be in the Teen Wolf spotlight, for better or for worse.

More like this
'Obi-Wan Kenobi' Takes Place After This Key Star Wars Movie
By Arya Roshanian
Jack's Facial Hair Moments On 'This Is Us,' Ranked
By Grace Wehniainen
Everything To Know About 'Grey's Anatomy' Season 19
By Brad Witter
Everything To Know About A Possible Season 3 Of 'The Flight Attendant'
By Gretchen Smail
Get Even More From Bustle — Sign Up For The Newsletter