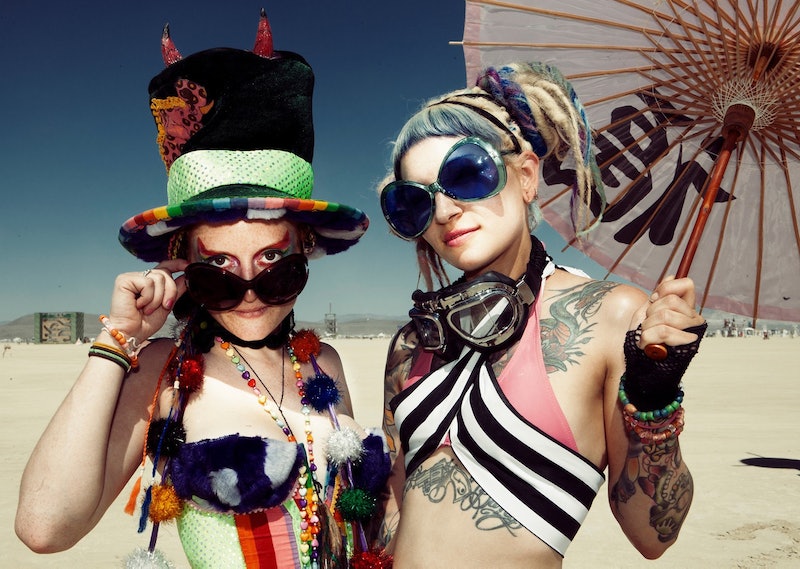 There’s a bunch of stigma associated with Burning Man, which has been by turns described by turns as an experiment in utopic living, a drug-addled hippie fest, and a playground for wealthy tech dudes. One of the main reasons why there’s still so much confusion about it is because when people come back from the playa (the event is held in an ancient lake bed that’s now a flat desert), they usually say something akin to “It’s indescribable .... you just have to go.” (Which really pissed me off in high school before my parents let me go and all my friends were going without me and were being all cryptic about it, but it’s kinda true.)

So what is Burning Man? Well, it’s a temporary city — Black Rock City. So it’s as diverse as any other city housing approximately 70,000 humans. (Try to describe New York City as just one thing and you’ll see what I mean.) You can spend your time eating drugs and dancing, you can go to workshops on anything from consent to the latest scientific discoveries, you can challenge your friends to a fight in the Thunderdome, you can do yoga, you can wander around and see the amazing large-scale interactive art, you can find cozy places to hang and chat with strangers who quickly become friends.

What you personally will do at Burning Man (and if you're there this week, you're certainly not reading this, because there's no Internet) is dependent on who you are and what gets you excited. We asked Bustle readers people what their favorite thing about the event is — to give you a little snapshot of why people go. This is what they had to say.

"I'm about to be going to Burning Man for my ninth year. That means I've basically become an adult at this event, and I love how it gives my year an annual marker through which I can measure how I've grown and changed. The thing I love most about Burning Man is how safe I feel there. Seriously.

I live in Brooklyn, where I feel like I can do basically whatever the f**k I want. But I'm always on my guard, because I know that realistically I'm the only one looking out for myself, my body. Burning Man has somehow constructed a space that, while of course not completely safe (one of the main mantras is "safety third," and I love that) makes me feel held and supported in a way that allows me to do exactly what I want. I know that if I walk into a situation I don't like, I can walk right on out. And if for some reason someone/something is blocking me, I have a whole neighborhood of strangers ready to actively support me. To me, that alone is worth experiencing — it recharges me for a year of being vigilant about my surroundings."

"There are a lot of different aspects of what I love about Burning Man, but it can be boiled down to a couple of my favorite things: fire and freedom.

Freedom: I've lived in more countries than I can count on my fingers, but Black Rock City is where I have felt the most safe in the world, like I can do whatever I want. If I like something, I get to say it. If I think someone is cute, I get to tell them (with no expectation of what that means!). If I don't like something, I get to make that clear and I don't have to engage with it anymore. If I need help, I can ask for it — burners are people who want to help you (it's in our ethos). People take responsibility for themselves. One of the mottos of the theme camp I help run is 'everybody can do whatever they want'. Couple this with an extremely consent-based culture, and you've got a recipe for everyone feeling really safe, supported, and in their bliss.

Fire: Whether you're building a large installation, a theme camp, or helping your neighbor build their dome, everybody helps to create the art. When we bring things to playa, a lot of them go home in the form of ashes (pack it in, pack it out — even if you burned it down on playa). I worked on a large effigy one year, and it was different than I had imagined. I spent 6+ months creating, organizing, building our sculpture (over 20ft high), breaking it down, shipping all three tons across the country, unloading it in the desert, and building it again, just to light it on fire. The whole thing burned in less than 15 minutes. I didn't expect to feel much of anything, but in those moments, watching all of that work go up in flames, it felt so liberating. Releasing my attachment to this thing that I had poured so much time and energy into, that felt amazing.

It reminds you that none of it matters, nothing is permanent. The only permanent things are the things that we experience, the authentic relationships that we forge which touch our lives, and the impact that we have as humans by showing each other how to be kind, respectful, and excellent to one another."

"Burning Man is one of the first places where I felt completely free to be myself. It's a funny thing being 32 and finally feeling free to discover who you really are — but there I was crawling out of my tent on my first day with complete shock at the freewheeling raucous and completely non-uniform individuals zipping and bopping every which way down every street at every hour, minute, and second of the day. It's like stepping into the pages of a Dr. Seuss book made real. I stepped into it and I've never looked back ... and my life is continually better as a result."

"My first trip to Burning Man was when I was to be a bridesmaid in the wedding of an amazing friend. I was struck by how generous and open people are. As an NYC transplant, it has taken years of hard work to cultivate deep, nurturing friendships. But this is a community within which I have found that openness, appreciation, respect, and joy reside on the surface. Beneath, there is a strong core of reciprocity, radical kindness, liberal intellectualism, and a commitment to collectively creating another path."

"Black Rock City is where the freaks of the world come to unite. We share inspiration, relationships, and communities in the desert, but my favorite aspect of the event is how it motivates people to shift their lives wherever else they live for 51 other weeks each year. Some of those changes relate to embodying our counter-culture's principles: experiencing a city of 60,000 with a functioning gift economy is profound, as is the silence among so large an assembled crowd during the closing temple burn on Sunday night.

Others relate to people: I'm still good friends with my first playa girlfriend, whom I met 12 years ago dancing in a dust storm; and have friends in most major cities from one or another of the theme camps I've joined over the years."

"The city is loud 24 hours a day for a week, the music and sounds never stop. But when the temple is burnt to the ground, 60,000+ people sit in a circle of reverence and the desert is silent, all noise ceases in respect and contemplation. It is powerful and beautiful and should be experienced at least once by every human being."

"My favorite part of Burning Man was the Temple. Different yet present every year, in 2013, the temple was a giant pyramid made entirely out of interlinking wooden triangles; an expert in the Pythagorean Theorem designed it. In the center was an obsidian obelisk. People were interspersed throughout the Temple, mostly sitting, mostly with their hats off, many crying; everyone feeling intense emotions. The scene is not surprising because written all over the walls are things that people want to let go of. Upon entering, my friend commented that he felt a difference inside of the Temple. On the last night of Burning Man, the Temple burns to cinders and Burners howl. I will not forget that Temple; it was beautiful and moving."

"Black Rock City is a blank canvas that every year is painted 3D with infinite possibilities. Then after a week it's washed away clean, waiting dormant for the next year to blow life into its dust. Previously, art has been made as an attempt to immortalize the artist, to leave a permanent lasting statement on the world about that people in that place. Burning Man rejects this notion of art for the sake of permanence and embodies the fleeting nature of an ever changing world. This makes Burning Man a new artistic movement, as the most prominent art creations are created to be destroyed.

For me, Burning Man is a fun way to learn how to go with the flow, how to make plans but have no attachment, no expectations, how to be flexible and find the flow to go. Burning Man helps me accept the infinite possibilities of life. For me it's a metaphor for life. Burning Man is what you make it. And we all make it what it is together."

"This will be my 18th consecutive year. The Black Rock City census informs me that I'm joined by .001% of the population because I've gone more than 15 years ...

I look forward more to the parts of it that are not peace and love, which I feel outweigh and have more authenticity than those that are. I enjoy seeing people pay all this money and put in all of this work only to realize that existence is nonsense (that none of their actions are supported by anything but agreement) and then start being just awful to their fellow human beings, either brutally or completely wrapped in dishonesty, or just starkly hypocritical. 'I love you, but if the water runs out I'll kill you' is my best way of translating the tightrope of human interaction that participants walk. There's something about an event based on cooperation bringing out the absolute worst in competition that just tickles the parts of myself that love filth and perversion and disruption, as well as reinforcing that this earthly plane is meant for the individual, not the collective."

The art is insane! (If you have a minute, do an image search for "Burning Man art" to see what I mean.) Massive steel sculptures that light up at night, double-decker trucks with dance parties on top, art cars shaped like every creature imaginable, enormous temporary wooden art installations that are burned at the end of the week ... every year, the scale and depth of creativity astounds me. My first year, I was blown away to realize that there are thousands of people who spend all year creating delightful, thought-provoking, interactive pieces of art simply for people to experience for this one week.

Because decommodification is a core value of Burning Man, there's no obvious corporate sponsorship or branding on any of the pieces of art, which is really unusual. People make and share art just for its own sake."