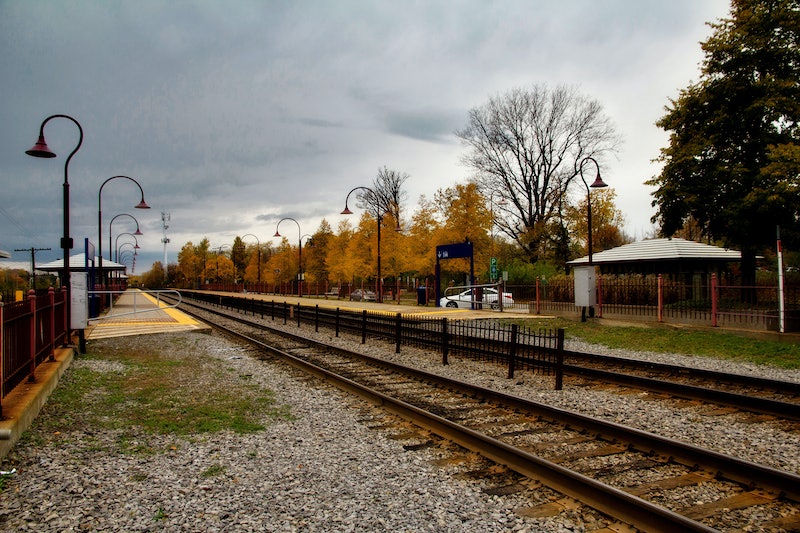 It's the end of the month, and the specter of paying rent looms large in everyone's mind. But rather than coming up with increasingly complicated schemes to avoid paying your landlord (no, they're not going to believe that the reason you can't make rent is because you're secretly saving the city as Spider-Man), why not take a cue from Leonie Muller, the college student who lives on a train? It may sound a little wacky, but Muller might have the right idea — as long as you don't mind washing your hair in a train bathroom all the time.

Most of us have probably dreamed about hopping on a train to nowhere at some point in our lives, generally in response to parents or other people who just don't understand us. Some of us have even done it. Muller, however, turned wanderlust into a lifestyle after a dispute with the landlord at her old apartment in Germany. Rather than passive-agressively using up building's hot water or simply moving apartments, the 23-year-old told the Washington Post that the incident made her realize she "didn't want to live anywhere anymore." At all. Instead, she gave up her apartment, bought a flat-rate train ticket, and began her life as a Millennial nomad.

She may be forced to wash her hair in train bathrooms and depend on noise-cancelling headphones for alone time, but for Muller, the ability to visit her friends and any city she wants on a whim is worth the lack of privacy. "It's like being on vacation all the time," she told the Post. Judging from her travel blog and Instagram, she's taking advantage of every moment.

Fortunately, her lifestyle isn't always on-the-go. Her boyfriend, mother, and grandmother have been supportive, and she frequently sleeps at the houses of friends and family. Contrary to what you'd think, though, living on a train isn't actually that much cheaper than renting an apartment. According to the Post, she only saves around $70 a month, despite giving up such amenities as kitchens, bedrooms, and actual walls.

Some people might say the discomfort isn't worth the little money she saves, but Muller says she's perfectly happy with her choice. "The next adventure is waiting just around the corner — provided that you want to find it," she added, speaking to the Post.

Muller is far from the first person to live the nontraditional life. In fact, during the eighteenth century, wealthy English nobles would sometimes pay men to be "ornamental hermits," which boiled down to living in a cave, growing an epic beard, and making appearances to surprise guests every once in a while. Even in the modern day, every once in a while the Internet will unearth someone who, to quote the immortal words of Miley Cyrus, just can't be tamed. Just for you guys, I've rounded up a few more alternative living options below:

Talk about planning ahead. Earlier this year, college junior Joel Weber built an itty-bitty house for $20,000 in order to avoid debt after graduation. It may be tiny, but the low utility costs and lower mortgage more than make up for its size. Plus, as with many things, it turns out shrinking houses makes them super cute.

What's better than a tiny house? A tiny house in a tree. According to many real estate websites, treehouses are becoming increasingly viable options for the literal treehuggers among us.

Only in Oregon. Bruce Campbell literally converted a decommissioned Boeing 727 into a house in the woods, because why not?

OK, this one isn't actually reality yet, but it's not for lack of trying. The Sub-Biosphere is still concept art at the moment; every day, though, we get closer to an actual underwater city. It's a long way off, but as soon as they ask for volunteers, I will be there.