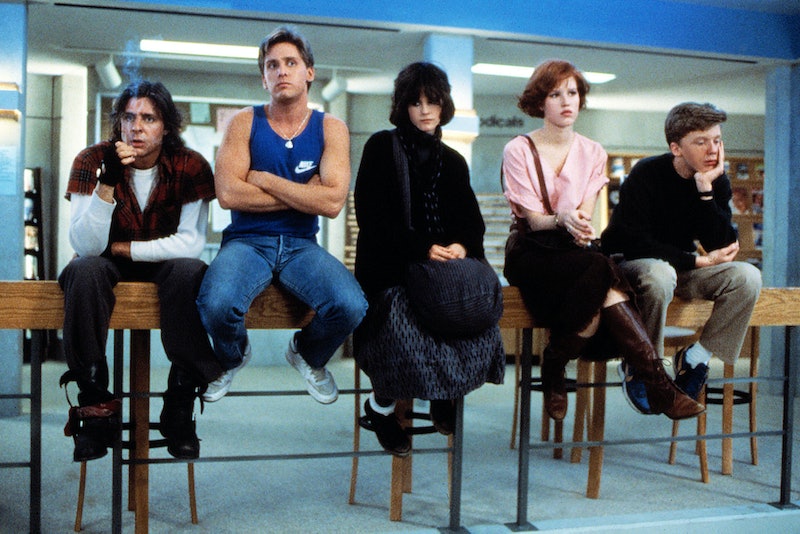 Ah… high school. The days of detention, chaotic hormones, and the careful sorting of our fellow classmates into generic social groupings. You remember, there were The Jocks, The Geeks, The Drama Kids, The Stoners, The Mean Girls… and yes, even you were placed squarely into one of these categories by the mysterious high school powers that be. Whether you were among the popular kids, struggling to maintain your reign over the plebes, or one of the über-nerds, struggling to maintain your 4.0 average, high school cliques were pretty much the worst, right?

Well, except those times that you totally imagined that you were struggling the same clique struggles that your favorite literary characters would’ve struggled if they had gone to high school today. Admit it, you totally imagined what it’d be like to ruthlessly rule the school alongside Becky Sharp, sneak cigarettes behind the gym with Ellen Olenska, or stay up all night finishing that extra credit Physics lab with Elinor Dashwood.

Fiction does makes everything better, right? So, maybe adding a little dose of literary imagination will help you think more fondly on your cliquey high school days. If so, read on to see what cliques would have been the right fit for your favorite heroines from literature.

She's the girl who hangs out with the boys, having loogie contests before gym class. She wore pants to prom and she dares you to say something about it.

You never even realized that that star quarterback on the football team was actually a girl until her helmet got knocked off at the championships. Then you were confused that you’d been making eyes at her through the helmet all year long.

Bathsheba Everdene (Far From the Madding Crowd by Thomas Hardy)

She wears mud-caked boots to school and always wins dodgeball in gym class. And with her killer looks everyone's always surprised when she's ready to get her hands dirty and show-up the guys at all those "manly" things.

She’s the kid who sits by herself at lunch and hides the sad puppy eyes she makes at her favorite jock under long bangs and dark eye shadow. But she’s also the one that nobody bullies after that time she took down Bob the bully with a few too-honest words about him.

She’s the pretty, rich girl who could totally be in with the popular kids (and tends to date the popular types), but prefers to wear black, talk about “deep” things, and secretly yearn for the bad boy she used to date but whom she's too good for now.

This is the girl you just don’t mess with. She’s pretty much a loner, though she’s known to have the occasional “hook-up.” She was pretty much done with this high school thing before it even started. Don’t try to be her friend though if you're at all weak-willed. She’s seriously not nice.

She’s the theater kid who tries out for every single play and usually lands the lead. But she’s so dramatic in everyday life you can barely tell the difference between when she’s on stage or off…

She didn’t try out for drama club until junior year (because she was too busy trying out all the other clubs and spending all her money on back-to-school clothes), but it turns out she has a flair for the dramatic. She only ever tries out for morbid, cynical roles.

She’s that drama kid who won’t shut up. You know, the one who drinks five lattes every morning and is so overactive, she wears you out after talking to her for five minutes.

She’s the queen bee of the whole school. Everyone knows who she is and wants to be her, though nobody really even knows why she’s popular. But she’s gorgeous and all the other mean girls answer to her so you know she’s scary.

Becky Sharp transferred in the middle of junior year, she had everything against her, and yet still managed to find her way to the top of the social ladder. You can always see her whispering and passing notes, and she’s left a trail of social corpses with daggers planted firmly in their backs.

Just straight up mean sometimes. She’s the girl who never wears the same outfit twice, arrives at school in a luxury Lexus, and got special permission to have her lunch brought in on a silver platter from the local five-star restaurant. On top of all that she's got a temper. If she was a little less anti-social she'd give Regina Goldman a run for her money.

That is, she was popular until she dared to date outside the clique, and then she famously sunk to the depths of the social hierarchy. Meanwhile, her boo, that former geek Vronsky, has risen in the ranks after his “conquest.”

She’s that popular girl whom everyone adores (even though her boyfriend’s a total jerk), from the geeks to the mean girls. She’s got it all — brains, beauty, plus she’s actually nice and even volunteers at the soup kitchen.

She’s rich and popular and slightly clueless, but she means well. And it’s possible she’s the one that set up Vronsky and Anna...

The Stoners, Hippies, and Indie Kids

She used to be one of the popular kids (though even then she spent a lot of time staring at trees and zoning out while twirling her way-too-long hippie hair), but after one weird summer she came back full-on hippie, shunning her the haters and quoting bell hooks.

She runs all the bake sales, and, for some reason, people always feel really strange after eating her famous brownies...

Ellen Olenska (The Age of Innocence by Edith Wharton)

She’s the rich girl from out of town who grew up following her parents around on archaeological digs all over the world and spent her last few years at a circus school learning the fine art of the trapeze. So she always has awesome stories. She kind of weird, kind of awesome, always saying the wrong thing, and all the dudes think she's "weird hot."

Dorothy Gale (The Wizard of Oz by L. Frank Baum)

Homegirl is a little nuts. She looks all innocent, but she’s from out-of-town and always saying weird things and talking about that crazy acid trip she had two years ago.

The Yearbook and Newspaper Staff

She’s that newspaper kid who’s probably failing all of her academic subjects because she’s trying to uncover the cafeteria conspiracy behind mystery meat.

She’s the senior who takes the most active role in the yearbook and everyone knows is the reason there are pictures of her and her boyfriend since middle school (Fred Wentworth, of course) on pretty much every page.

She’s the one who (creepily) knows everybody’s genealogical history and wants to include family trees in the yearbook.

Scheherazade (One Thousand And One Nights)

She’s the one who’s not really on staff but is always submitting weird short stories and poems.

She’s the sweet one who has somehow managed to sweet talk her way out of doing any actual work for the entire four years of high school. But, of course, is totally shocked when her name isn’t called at graduation.

Lucy Honeychurch (A Room With A View by E.M Forster)

Total goody two shoes… but the one that falls for the bad boy and feels like a rebel the first time she gets detention after he convinces her to ditch 4th period.

She’s that suuuper-shy kid that always blushes furiously whenever the teacher reveals that she got the highest grade on the test… again. And yes, she's totally silently judging you.

She's the nerd who might not get the best grades all the time, but does every last shred of homework, all the extra credit, and the optional after-school educational field trips.

Lauren Olamina (Parable of the Sower by Octavia Butler)

She’s the kid that’s taking college-level courses and is way young for a senior because she skipped three grades. She has zero fashion sense, and is too busy formulating her own plan to save the world from climate change to care about socializing. Also she’s probably obsessed with zombie movies.

Eleanor's the science geek that everyone goes to for help with that impossible Physics lab. Only she has zero time for that nonsense and turns the slackers away with an eye roll. She's the smarty that audibly sighs every time someone asks a "dumb" question in class (there are dumb questions y'all). She might've been slightly popular, but her theories about extra-terrestrial life put her squarely on the weirdo scale.

She’s hilarious. She’s the kid whose interruptions even the teachers don’t mind, because they’re too busy trying not to laugh themselves (and failing). Besides, her jokes are always dead on and full of wit, so they can’t really complain. But don’t let her jesting fool you, because she’s also the girl that can make full grown adults weep with just a few words.

Sabina (The Unbearable Lightness of Being by Milan Kundera)

She pushes the dress code to the limit and often wears weird things (like bowler hats) just for the fun of it. She might not be verbally hilarious, but she definitely DGAF about anything, and is most likely the reason your History teacher is now going through a divorce...

She's no class clown; Moll is a straight up bad girl... and she's good at it. She's the one who dognapped the school mascot for a week and then managed to get recognition by the principal for "finding" poor little Sparky.

Galadriel (The Lord of the Rings by J.R.R. Tolkien)

Her parents paid for her to go to all the best schools. She’s related to some seriously famous rich people. She’s involved in every single activity, and is always the best at it. She gives one hell of a valedictorian speech. Oh, and she totally cosplays on the sly.