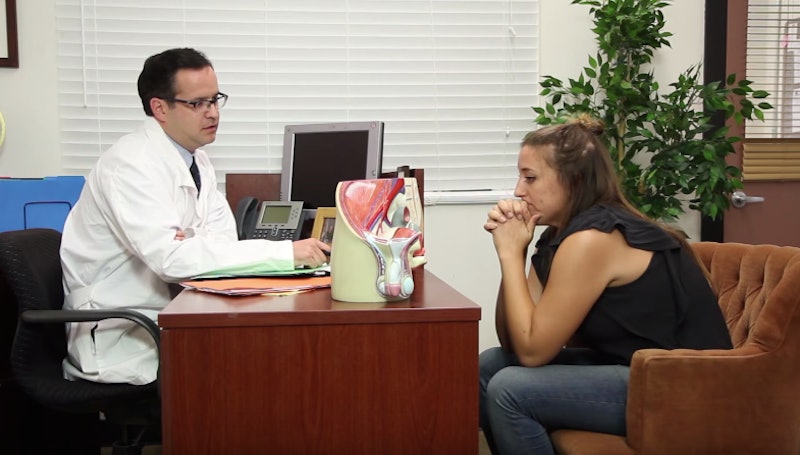 In this wonderful little video, BuzzFeed explores what happens when women have opinions. Because even in an era when "feminism" is a buzzword and conversation around women's issues is pervasive, it's still a social impropriety to be a woman with an opinion. The video opens with a woman being clinically diagnosed by a male doctor as "having an opinion" as though she has some kind of terrible illness. Which is sometimes how it feels to be a woman who has an idea and something to say about it.

Women who try to have a voice are still treated a certain way in general, even in educated circles. Women with opinions are often derided as shrill, b*tchy or insufferable, whereas passionate men don't receive the same vitriol for their ideas. More to the point, men with opinions are often handed a soapbox from which to preach them from, no matter how ridiculous they might be. Case in point: our future president Mr. Donald Trump (I say future not because I support him but because I think this might, sadly, actually be the world we live in, and possibly deserve). Politics aside, here are a few of the things, or "side effects" that will happen when a woman has an opinion:

1. She Will Be Alienated From Family And Friends

2. She Will Receive Arbitrary Judgement From Strangers

3. She Will Be Subjected To Backhanded, Casual Misogyny

4. She Will Be Made To Feel Undesirable

Watch the whole thing below and cringe at how real it feels: