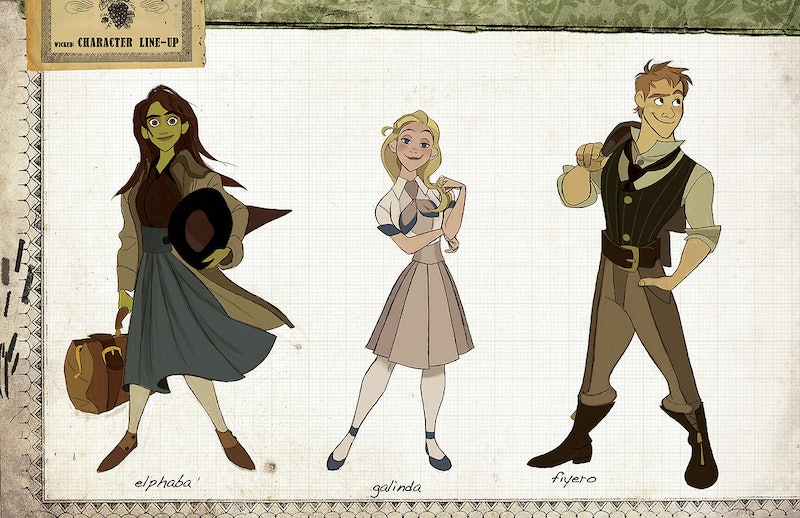 Confession: I am a girl who loves musicals...and I'm not a fan of Wicked. I mean, I get excited about it and I'll watch it just like any other musical. But my feelings about Wicked are much like my feelings about Glee: I feel like it's constantly trying to hit me over the head with some kind of message that's not being presented in any sort of interesting or new way ("Being different is good! Friendship lasts forever!"). But even I got excited about Disney animator Minkyu Lee's Wicked drawings he posted on his Tumblr (in two parts) last week. They're from a personal portfolio he created in 2008, so don't get your hopes up — they're not affiliated with any Disney projects. But the drawings made the connection obvious...really, why hasn't Disney done this already? The story already has the makings of a classic Disney animated film, so all they really need is someone to animate it (oh wait...).

1. It's Based on a Literary Work For Children

Okay, so it's not as direct an inspiration as Cinderella. The Wizard of Oz was a book that loosely inspired the book Wicked, on which the musical was loosely based. But hey, Disney got pretty liberal with The Princess and The Frog's mythology too. And just like that Disney film, Wicked flips the script in a way that's a new take on the story while staying true to the original.

Disney builds its reputation on all things magical, and Wicked takes place in a world where magic is an integral part of it. There's spells! Flying brooms! Hell, there's even flying monkeys! Speaking of which...

Disney pretty much has a degree that there must be some sort of talking animal, or inanimate object, or cute animal with a personality in each of its animated movies. Not only does Wicked have talking animals, but they're ability to talk is even a major plot point in the musical.

4. The Characters Are Classic Disney

There's both a Girly Princess in Glinda (a la Snow White, Giselle, or Charlotte) and a Spunky Heroine in Elphaba (like Merida, Mulan, or Kida), and even a shallow Prince Charming in Fiyero (Prince Naveen, much?). And they're portrayed in the same way as Disney characters: snappy and bright, with a few defining characteristics but overall, they're ultimately good or bad people.

Well, duh. But really, can't you hear a little animated Glinda singing "There's nothing that can stop you, from becoming popu...ler...lar."

Although the real question is...would it be better than seeing Winston sing it?

More like this
Sadly, You Can’t Stream 'Doctor Strange In The Multiverse Of Madness'... Yet
By Morgan Leigh Davies
10 Eurovision Moments That Celebrate The Weird & Wonderful Camp Extravaganza
By Sam Ramsden
What Does Doctor Strange’s Third Eye Mean?
By Arya Roshanian
Elizabeth Olsen's Chris Evans Friendship Update Was Accidentally Hilarious
By Grace Wehniainen
Get Even More From Bustle — Sign Up For The Newsletter