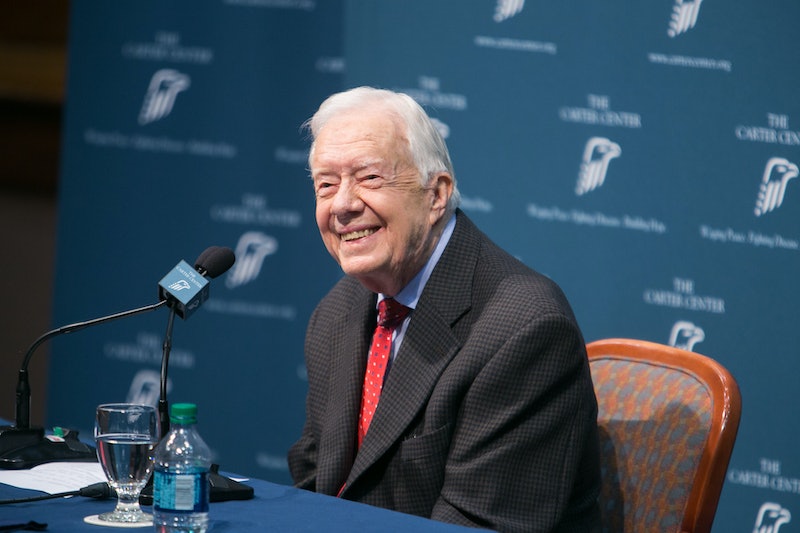 Human rights activists and former President Jimmy Carter announced last week that he has four cancerous lesions on his brain, provoking an outpouring of support from his native state of Georgia, the country he ran for four years, and the world that he has spent the past four decades trying to make a better place. The former peanut farmer from Plains, Georgia, told reporters that he would be undergoing his first round of radiation therapy at Emory Hospital in Atlanta. A nuclear scientist by training and a former peanut farmer by trade, Carter took the White House in 1977 as the first Democratic president since Lyndon Johnson. But after an attempt to rescue the 52 Americans held hostage in the Iranian Embassy in April 1980 went south, Carter lost his reelection bid to Republican superstar Ronald Reagan. For decades, Carter, known for his humanitarian values, has been thought of as an unsuccessful president, but one of the most productive ex-presidents. But today, some of his former aides are seeking to challenge that historical record.

Carter demonstrated true leadership while president, often in the face of some of America’s most intractable problems, wrote Stuart Eizenstat in the editorial pages of The New York Times on Tuesday. Eizenstat served as Carter’s chief domestic policy adviser in the White House. Among the list of accomplishments that Eizenstat puts to Carter’s stint as president are the creation of the Departments of Energy and Education, tighter financial disclosure rules in elections, increased college tuition grants for low-income students, and the negotiation of the Camp David Accords, a groundbreaking peace treaty between Israel and Egypt which remains a cornerstone of U.S. foreign policy in the region.

Rather that fade into obscurity after leaving the White House, Carter took his newfound freedom from grueling presidential commitments to get involved in the sorts of global fights he thought his faith called him to. He founded the Carter Center, a nonprofit advocacy organization that runs peace building and public health initiatives around the world. For decades, the Georgia leader has set about tackling problems as diverse as eradicating the Guinea worm in Africa, addressing global poverty, monitoring elections, and attempting to broker peace in the war-torn Middle East. In 2002, Carter was awarded the Nobel Peace Prize in recognition of “his decades of untiring effort to find peaceful solutions to international conflicts, to advance democracy and human rights, and to promote economic and social development,” according to the Nobel Foundation.

As Carter begins his cancer treatments amid the political zoo that is the 2016 primary season, it is worth looking back to seven moments over his career in which he wasn’t afraid to speak honestly and openly about the problems facing the world.

1. On The Violence Of War

War may sometimes be a necessary evil. But no matter how necessary, it is always an evil, never a good. We will not learn how to live together in peace by killing each other's children.

2. On The Fear Of Difference

We have a tendency to condemn people who are different from us, to define their sins as paramount and our own sinfulness as being insignificant.

Because we are now running out of gas and oil, we must prepare quickly for a third change, to strict conservation and to the use of coal and permanent renewable energy sources, like solar power.

The most serious and universal problem is the growing chasm between the richest and poorest people on earth. Citizens of the ten wealthiest countries are now seventy-five times richer than those who live in the ten poorest ones, and the separation is increasing every year, not only between nations but also within them.

5. On Decriminalizing Drug Use

I believe that Jesus would approve gay marriage, but that's just my own personal belief. I think Jesus would encourage any love affair if it was honest and sincere and was not damaging to anyone else, and I don't see that gay marriage damages anyone else.

Women are prevented from playing a full and equal role in many faiths…This discrimination, unjustifiably attributed to a Higher Authority, has provided a reason or excuse for the deprivation of women's equal rights across the world for centuries. At its most repugnant, the belief that women must be subjugated to the wishes of men excuses slavery, violence, forced prostitution, genital mutilation and national laws that omit rape as a crime. But it also costs many millions of girls and women control over their own bodies and lives, and continues to deny them fair access to education, health, employment and influence within their own communities....

The truth is that male religious leaders have had — and still have — an option to interpret holy teachings either to exalt or subjugate women. They have, for their own selfish ends, overwhelmingly chosen the latter.

More like this
The Lionesses Are Calling For Equal Access To Football In Schools
By Sophie McEvoy
'The Capture' Is Finally Back – & S2 Looks Tense AF
By Sophie McEvoy and El Hunt
7 Cracking Quotes From 'Love Island' 2022
By Frances Stewart
Your Daily Horoscope For August 10, 2022
By Mecca Woods
Get Even More From Bustle — Sign Up For The Newsletter