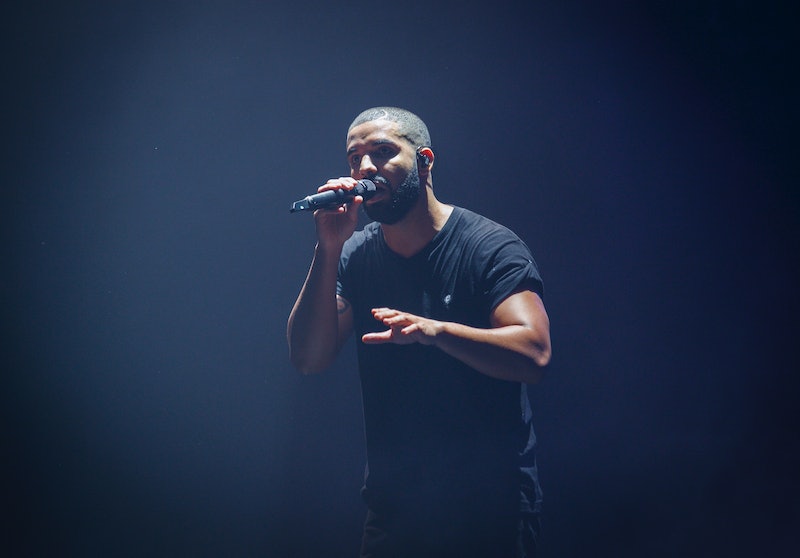 We've all had a while now to listen to Drake's newest song "Hotline Bling", which he dropped on Jul. 25 alongside "Right Hand," and that Meek Mill response, "Charged Up." And I've been doing exactly that ever since — listening to it and loving its bouncy deliciousness. Which is why I'm surprised that it just now occurred to me to ask — who is "Hotline Bling" about? Knowing who songs are about is one of my favorite things in the entire world, because it gives me that precious insight into celebrity relationships that they will never just up and give me themselves.

Unlike in other songs, when he hasn't shied away from dropping names, our boy Aubrey Graham never actually reveals the identity of the woman he's singing and rapping about in "Hotline Bling." However, Rap Genius seems to think it's Drake's old love interest Nebby, and, since they've never led me astray before (at least as far as I know), I'm inclined to believe them. "Nebby" is Drake's ex-girlfriend Zineb Samir, whom he dated in 2009 and references in "Look What You've Done" with the line: "It’s like ’09 in your basement and I’m in love with Nebby / And I still love her but it fell through because I wasn’t ready."

Drake has also acknowledged that his song "Best I Ever Had" is about Samir, so she has a storied history of showing up in his tracks. But, if you still need some convincing, here are some of the specific lines that could point to her.

This suggests whoever it is stayed behind when Drake left Toronto — which just so happens to be where he and Nebby used to hang out.

Most likely a reference to Drake looking through Nebby's Instagram account, which is full of photos of her in bikinis in exotic locales, just generally living her life with Champagne and parties. You know, the dream.

For someone who travels as much as Drake does, he sure doesn't seem to like Nebby doing the same thing.

So there you have it. Sure, these lyrics could technically still be in reference to someone else, but, from where I stand, all signs seem to point to Nebby. Of course, Drake could end all this speculation by coming out and revealing the identity of this mysterious woman himself, but, hey, where would be the fun in that?

More like this
Meghan Trainor & Daryl Sabara Are Expecting Their Second Baby
By Jake Viswanath
Adam Levine & Behati Prinsloo Welcome Their Third Child Together
By Jake Viswanath
Hilary Duff's Husband Matthew Koma Has Her Name Tattooed On His Butt
By Jake Viswanath and Stephanie Downs
Mimi Webb’s IRL Situationship Inspired “Red Flags”
By Catharina Cheung
Get Even More From Bustle — Sign Up For The Newsletter
From hair trends to relationship advice, our daily newsletter has everything you need to sound like a person who’s on TikTok, even if you aren’t.