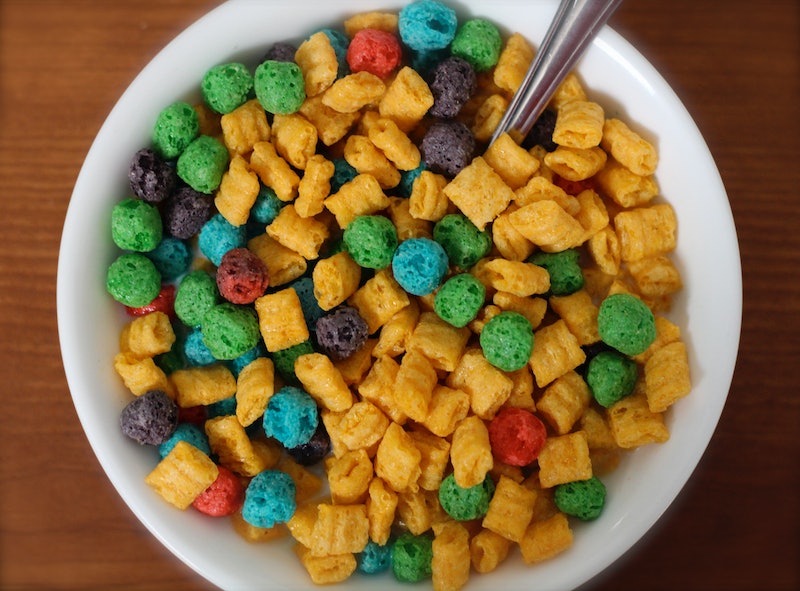 I am a '90s kid who was brought up solely on cereal for breakfast. Even when I got older, the habit of eating cereal for breakfast was so engrained in my brain that I would refuse any other option (yes, even bacon). Cereal was, and still is, my main breakfast squeeze, but even if you're the world's biggest breakfast enthusiast, I'm willing to bet there are some '90s cereals you've completely forgotten about.

Honestly, that decade was truly the golden age for cereal. Walking down the cereal aisle at the store was like walking into a candy store for me. I would get lost trying to decide what I wanted to eat for the next week. Would it be something chocolate, or fruity? Would it be one of my favorite characters on the box that swayed my vote? Or would a new, featured toy buried at the bottom of the box win me over?

If you grew up in the '90s, you know that there was a ridiculous number of amazing options to choose from. You likely faced the same cereal dilemma with every weekly trip to the grocery store.

With the '90s so far behind us, I had almost forgotten about some of my beloved favorites. It’s been rather tragic to watch these cherished cereals disappear from the shelves over the years. How many of these '90s cereals do you remember?

Hidden Treasures was one of my favorite cereals back in the day. Those corn squares filled with a fruity filling were always a surprise! You never knew whether you would get orange, grape, cherry, or no filling at all.

Talk about a kid’s sprinkle dream come true. Sprinkle Spangles may have been short-lived on the cereal shelves, but the sprinkles live on in memory of any child who loved sprinkles on everything.

In theory, Pop-Tarts Crunch cereal should have been a major hit with '90s kids. Tiny Pop-Tarts with the glorious addition of milk, piled high on your spoon every morning — how could such a genius idea fail?

This is the cereal I was most surprised to see be discontinued. Who wouldn’t want to eat a bowl full of Oreo-flavored loops for breakfast? I still can’t understand why Oreo O’s wasn’t a major success like Reese’s Puffs, or Cinnamon Toast Crunch.

Sweet rice cereal with the addition of marshmallows was one of those classic combinations I never got sick of. There were marshmallows for goodness sake! Somehow, Dino Pebbles faded away, and Fruity Pebbles continues to sit on cereal aisle shelves.

A distant cousin of Cinnamon Toast Crunch, Cinnamon Mini Buns were an attempt to transform the cinnamon bun into a crunchy cereal kids would go crazy over. I vaguely remember trying these once, and not being convinced that they were better than an actual cinnamon bun. Sometimes you can’t beat a classic.

Do you remember the Count Chocula commercials? I still remember the haunting voice that at first gave me very real nightmares, and had me avoiding the cereal for months. The chocolate-y goodness finally won me over when I drank the chocolate and sugar-infused milk left in my bowl. This is one of the five monster cereals that made a bit of a comeback in 2013/2014 during Halloween.

Reptar Crunch may have had the shortest shelf-life of all the '90s cereals you see here. It was an attempt to promote the film Rugrats Go Reptar! (yes I watched it, didn’t you?). Unfortunately the cereal fell flat, much like the movie.

I have a confession. I still eat Teddy Grahams whenever I have the chance… Really all I’d have to do is add milk to them, and I’d have the Teddy Grahams Breakfast Bears back in my cereal bowl. Way to keep the same great taste and just add milk, Nabisco.

How Kix stuck around without the berries, I’ll never know. The berries are what gave the cereal flavor! Not to mention they were just so cute, you guys.

This is one of the more obscure cereals that I quite honestly can’t remember if I even tried. I remember the TV show, but the cinnamon-flavored cereal dotted with mini marshmallows is something I may have missed out on. If someone can track down a box, I’m totally down for “A Most Awesome Breakfast Adventure,” as the cereal’s slogan boasts.

Any '90s kid remembers watching Family Matters and laughing hysterically at Urkel once a week. That nerdy, high-pitched “Did I do that?” will forever ring in my head whenever I think of Urkel. Unfortunately, the strawberry and banana-flavored loops called Urkel-Os were not as memorable.

You would think this cereal would have made a major comeback with either of the new Spider-Man movie series released recently. Alas, the tie-in for Spider-Man cereal only lived with the animated TV series as a limited edition cereal. But again, there were marshmallows… how could it be a bad cereal?

Wheaties Dunk-A-Balls were the cereal every '90s kid remembers playing with more than eating. The sweetened wheat and corn puffs were designed to look like tiny basketballs, begging to be thrown at each other’s bowls across the breakfast table.

This is the fruity cereal kids begged their parents for. This is another one of the five monster cereals that made a bit of a comeback in 2013/2014 during the Halloween season. The cereal came back with a distinct orange flavor this time, which I personally love, but wasn’t received with as much fanfare as the original.

Filled with “ninja nets,” “ninja turtle” marshmallows, and eventually the addition of pizza-shaped marshmallows, this cereal was destined for the cereal bowls of cartoon-watching children. If you were really lucky, you ate this cereal out of a Teenage Mutant Ninja Turtles bowl… Cowabunga, dude!

Scary cereals were all the rage in the '90s, whether they were ghosts, skulls, or monsters. The Addams Family cereal was short-lived due to a distinct lack of flavor, but the creepy cereal shapes appealed to any true fan of the show.

Though you can still find Waffle Crisp in a few stores, it’s extremely hard to track down. Thankfully, the die-hard waffle lovers have stuck by the cereal, and you can easily track it down online from the comfort of your own home. Waffle Crisp continues to live on!

When French Toast Crunch was discontinued, I remember there being a pretty big uproar about it — even if it was just in my elementary school classroom. Now, it's back on shelves, if you know where to look for it. There's a certain genius behind turning breakfast foods into cereals. This is proof.

More like this
10 Pumpkin Recipes That Are Way More Creative Than Pie & Lattes
By Rebecca Deczynski and Alexis Morillo
On TikTok, Tinned Fish Date Night Is The Latest Viral Food Obsession
By Emma Carey
Netflix Reveals First Look At Wednesday In The 'Addams Family' Spinoff Series
By Bustle Editors
Kenan & Kel Just Reunited At The 2022 Emmys & Twitter Is Overjoyed
By Grace Wehniainen
Get Even More From Bustle — Sign Up For The Newsletter