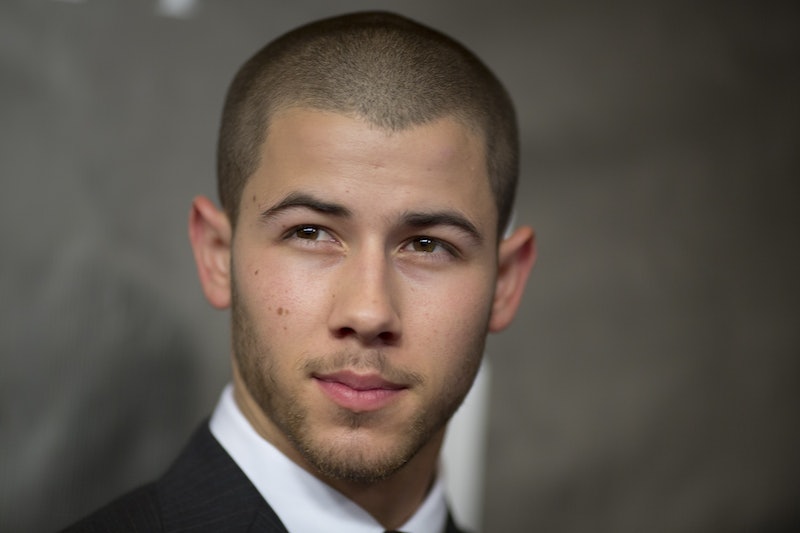 He's dreamy, talented, has abs that could save doomed civilizations, and was just named Music Curator for the Miss America competition, because no one knows what a woman wants to hear when she's scantily clad quite like he does. Nick Jonas, 22, has come a long way since wearing a purity ring and playing third fiddle to older brothers Joe and Kevin in the Jonas Brothers. The songwriter and singer, who will debut a new single called "Levels" at the 2015 MTV Video Music Awards pre-show on Aug. 30, has found his own celebrity, and with that comes a natural interest in his dating life. So, who has Nick Jonas dated during his years in the spotlight?

Despite the many opportunities he has to date a variety of women — I bet he is propositioned every time he steps outside to get the mail — Jonas doesn't have a reputation as a Don Juan. He is either highly selective about who he dates or just supremely sweet, thoughtful, and serious, because he isn't the celeb being photographed with another woman every time the paparazzi catch him out and about.

But, of course, there have been women in his life, including several A-listers and other famous beauties who have had the pleasure of getting to know the musician and spending quality time with his abs (and his soul). Here is a list of women Jonas has reportedly dated. And, by the way, one famous brunette model is not on this list — Jonas recently confirmed he is not dating Kendall Jenner.

Jonas dated Olivia Culpo, a former Miss Universe winner, for two years. During that time, she inspired him to write the song "Jealous" and the two were often photographed together at events, looking happy and affectionate. Sadly, they broke up this year and, although they didn't reveal the reason for their split, Jonas opened up in an Interview on Extra with Mario Lopez, calling Culpo "amazing" and saying, "We had a great, a beautiful two years together. It's been a crazy couple months and I wish the best for her in the future. It is tough, though." Anyone else hoping these two get back together?

He never confirmed their relationship, but Miley Cyrus wrote in her book, Miles to Go, that she and Jonas dated from 2006 until 2007, according to Teen. Rumor has it Jonas' song "Wedding Bells" is about their relationship. With lyrics like "No, I don't wanna love if it's not you/ I don't wanna hear the wedding bells prove/ That we can't try one last time." I'd be lying if I said I don't have a million questions about this union.

Here's an interesting one (by "interesting" I really mean frightening). Jonas wrote the song "What Do I Mean to You" about Ora. It isn't very flattering. Here are some sample lyrics: "No need for water, Rita/ You got the wine/ Searching for diamonds/ When I gave you the mine/ What do I mean?/ Tell me, what do I mean to you, to you?" You'd assume they dated, right? But Ora claims she and Jonas were never romantically involved and that she was as surprised as everyone else to hear the song. She says she texted him and his response was: "You know what, I just obviously didn’t put out how I felt across to you properly." So, did they actually date or not?

Delta Goodrem was 27 when she started dating then 18-year-old Jonas, but despite their age difference, the Australian singer-songwriter told 60 Minutes their relationship was the real deal. "Maybe it’s that I’m interested in challenges. Maybe I’m one of these spirits who goes, ‘Ooh, what is this lesson here? What am I learning here?’ ... There was a genuine love, definitely.” The couple split up after 10 months.

Supermodel Gigi Hadid is happily dating Joe Jonas now, but she and Nick reportedly went on a few dates in 2012 and 2013 before she hooked up with Cody Simpson and Nick found love with Olivia Culpo. If you believe this rumor, Joe caused a rift in his family when he got close to Hadid, reports RadarOnline. “It was an ongoing thing,” a source said about Nick Jonas and Hadid's dates. “The fact that Joe and Gigi are hanging out now is just strange.” It doesn't seem all that strange now, so I'm guessing any tension (if there was any at all) was short lived.

Looking back now, Selena Gomez and Jonas seemed like babies when they dated on and off from 2008 until 2010. The two made headlines because both reportedly took off their purity rings while together. Gomez was heartbroken when they split, but the good news is that their separation led to her close friendship with Taylor Swift. She told People, "Taylor is one of the greatest people. When I split with my first boyfriend [Nick Jonas] and I was really sad about it, she flew into town with homemade cookies and a bunch of junk food. To this day, if I called her, she would do the same thing, despite being one of the busiest people in the world."

I'm kind of torn over which is better: dating Nick Jonas or becoming BFF's with Taylor Swift. Does one have to choose?