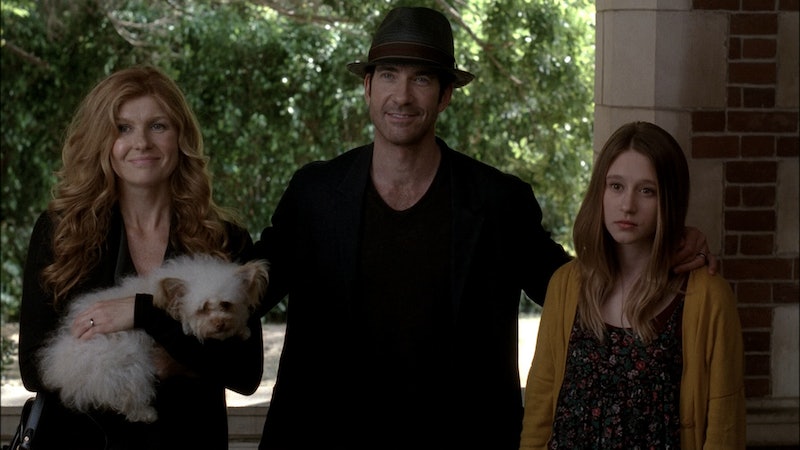 We're a mere two months away from the premiere of American Horror Story: Hotel , but fans are just now getting major details about the new season of FX's creepy anthology series. Entertainment Weekly gave fans the inside scoop on what to expect from the show's fifth season, and not surprisingly, the series is continuing its horrifically bananas track record. We're talking dildo-wielding monsters, a countess who slashes people to death with her manicure, and Evan Peters with a cartoon villain mustache. The most shocking reveal yet, however, had nothing to do with sex-toy wielding creatures: According to show creator Ryan Murphy, American Horror Story: Hotel will return to the murder house. Yep: we're going back to where it all began.

The first season of American Horror Story, which was later subtitled Murder House, revolved around the Harmon family who moves into a Los Angeles home that has more than a few skeletons in its closets, both figuratively and literally. Anyone who dies in the so-called "Murder House" has their soul trapped within it for the rest of eternity, and the violence within its walls means that the place got mighty crowded by the end of the season. Entertainment Weekly revealed that the Murder House's real estate agent Marcy (Christine Estabrook) will sell the similarly scary hotel to its new owners in the new season, and that, eventually, fans will get to revisit the house itself.

Murphy famously said back in 2014 that every season of American Horror Story is connected, but could there be a deeper meaning to these "connections" than just giving fans another look at former characters? While it's certainly possible that Murphy planned the connection between Murder House and Hotel as a "wink" to loyal fans, that's not the only explanation for why certain themes, characters, and storylines continually appear within the show's seemingly different worlds. Murphy may be looking at a much larger plan for this series than fans are able to pick up on just yet. Here are how these connections might fit into the larger mythology of this universe and add deeper meaning to all of this craziness.

1. Marcy Is The Devil

Is it possible that real estate agent Marcy just has serious bad luck when it comes to the haunted properties she lists? Perhaps: or perhaps she's actually the one orchestrating the madness. After all, she sold the Murder House to not only the Harmons, but the family who moved in before them, and she'll be selling the hotel in the new season. Marcy may seem like a busybody agent, but what if she's actually the puppet master of all of the violence on the show?

Peters' Tate was one of the most memorable characters to come out of the entire anthology series, and it seems that, in Hotel, the actor is once again playing a villain. Unlike in previous seasons, Peters' character will exist as a part of the past: according to EW, he will play the "murderous Mr. March," the former owner of the hotel. Could Tate be a reincarnation of Mr. March?

We never got a real answer as to why the Murder House became a place for ghosts, even though the show suggested that it started with Dr. Montgomery bringing his son back from the dead. What if the curse began long before that and was caused by a different entity entirely, like a witch who cast a spell on the home? The new season could reveal that both the Murder House and the hotel share the same traits because the same person caused them to become places for evil to be contained. If a witch is responsible for all of that, we may be looking at a connection to Coven: it is currently the only season that doesn't seem to have a thread to the others.

4. A Hotel Character Is Responsible For The Death Of A Murder House Resident

Now that we know that we will revisit the Murder House, the real question is: why? One of the most obvious possibilities is that we'll get an origin story of sorts for one of the many ghosts that live within it. We know that the "Hotel Cortez" is filled with many murderous characters, including the bloodthirsty Countess, played by Lady Gaga. Could Gaga's character be the one who killed a Murder House resident years before the Harmon family moved in? It certainly would tie everything together in a grotesque little bow.

However Murder House and Hotel tie together, it's sure to thrill longtime fans of the series. Welcome back home, everyone.

More like this
'The Ex-Wife’s First Look Pics Are Giving 'Gone Girl' Vibes
By Bustle UK
'The White Lotus' Season 2 Finally Has A Release Date
By Bustle Editors
How A Location Blunder Changed The Outcome Of 'The Capture' S2.
By Darshita Goyal
These 25 International Horror Movies On Netflix Prove Fear Is A Universal Language
By Bustle Editors
Get Even More From Bustle — Sign Up For The Newsletter