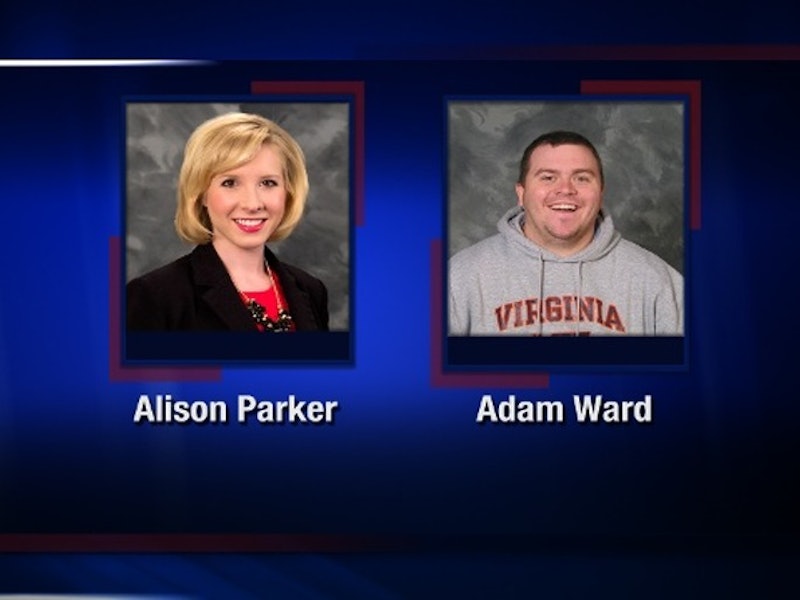 On Wednesday morning, reporter Alison Parker and cameraman Adam Ward of CBS affiliate WDBJ7 in Roanoke, Virginia, were shot to death while conducting a live interview. Parker, a 24-year-old morning reporter for the station, graduated from James Madison University, and Ward, a 27-year-old videographer who was planning to leave WDBJ7 in the near future, graduated from Virginia Tech. Shortly afterward, Chris Hurst, an anchor at the station, posted photos of Parker to his public Facebook page, explaining that the two of them were in a relationship. Ward, meanwhile, was engaged to Melissa Ott, a producer who was celebrating her last day at WDBJ7. As their families, loved ones, and fellow journalists mourn and remember Parker and Ward, there are a few things you can do to support Alison Parker and Adam Ward's families and friends.

There aren't any official crowdfunding pages out there for Parker and Ward's families and loved ones yet, but there are still other ways to offer them your support. You can use social media to communicate your thoughts and prayers, educate yourself on how to support journalists in times of trauma, and raise awareness for journalists who die on the job. As you send your support, consider not sharing or watching the videos of the shooting. Here's how to support the families and friends of Alison Parker and Adam Ward.

Parker and Ward died as they lived, working hard as journalists and spending time with their loved ones. Sharing that footage is not only traumatizing for those who knew them, but also dictates how they will be remembered. Instead, read, watch, and share the great work they did, as well as the thoughts and statements made by those who knew them.

Condolences have been pouring into WDBJ7 in honor of Parker and Ward. Parker's family has also spoken out.

Today we received news that no family should ever hear. Our vivacious, ambitious, smart, engaging, hilarious, beautiful, and immensely talented Alison was taken from the world. This is senseless and our family is crushed.

You can tweet, Facebook message, call, or email the WBDJ7 team with your support and your thoughts.

You can also post on Parker's public Facebook profile to express your condolences to her family and loved ones.

Reporters Without Borders is another organization that advocates for journalists around the world. RWB aims to support and protect journalists and combat censorship in the fight for freedom of information. RWB recognizes that although the death of American journalists on the job on U.S. soil is quite rare, it still happens, and resources need to be readily available to support those who are affected. Delphine Halgand, U.S. Director of Reporters Without Borders, explained the significance of Parker and Ward's deaths:

Even if this is not a case of journalists being targeted while reporting in war-torn countries or murdered because of their investigation on corruption or drug-trafficking, to kill two journalists on live television in cold blood demonstrates a certain willingness to dramatize the crime committed against them.

Honor Journalists Who Have Died On The Job

We can't let ourselves be desensitized to violence. Conversations about gun control in relation to Ward and Parker's deaths have already begun. But we must also keep talking about these two journalists, keep remembering them, keep celebrating them. Be kind, compassionate, and empathetic when talking about them, and keep their loved ones in your thoughts. Make sure you remember them as they would want to be remembered; they deserve far more attention and recognition than the individual who took their lives.