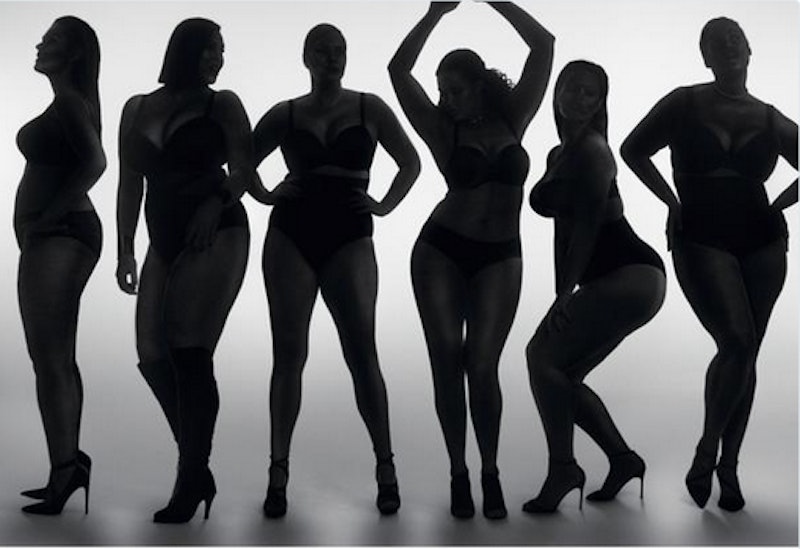 The September Vogue is important for a lot of reasons: its sheer size, the fashion, the fact that Beyonce is on the cover this year, the fact that the #PlusIsEqual campaign is running in the issue. Yes, really! This news broke on Women’s Equality Day and the timing couldn’t be more perfect.

The ad features the silhouettes of six plus-size women and sends a very powerful message. No brand name or logo is featured on the ad, but the Lane Bryant twitter account tweeted a message reading, “It’s about time. (And what a perfect day for this) #WomensEqualityDay #PlusIsEqual,” leading some to believe the brand is associated with the ad. Bustle has reached out to Lane Bryant for further comment.

Instead of motivating you to shop a certain brand, the ad instead directs you to the website plusisequal.com. Here you find statistics about plus-size models and their representation in the media.

“The average US woman has always been represented by models that weigh less, but within 17 years their average weight has dropped significantly,” the website states. According to the site, in 1995 the representation was 8% less than the average woman, and by 2012 it was 23% less.

These numbers are not as shocking as they should be because it’s been made quite clear that there’s a lack of body diversity in fashion media. But, maybe #PlusIsEqual running in Vogue, a magazine notorious for its lack of diverse models, is a strong step in the right direction.

It is about time, isn't it?

An ad campaign this strong has me very excited for the future! Kudos to Vogue for getting involved with this powerful movement.