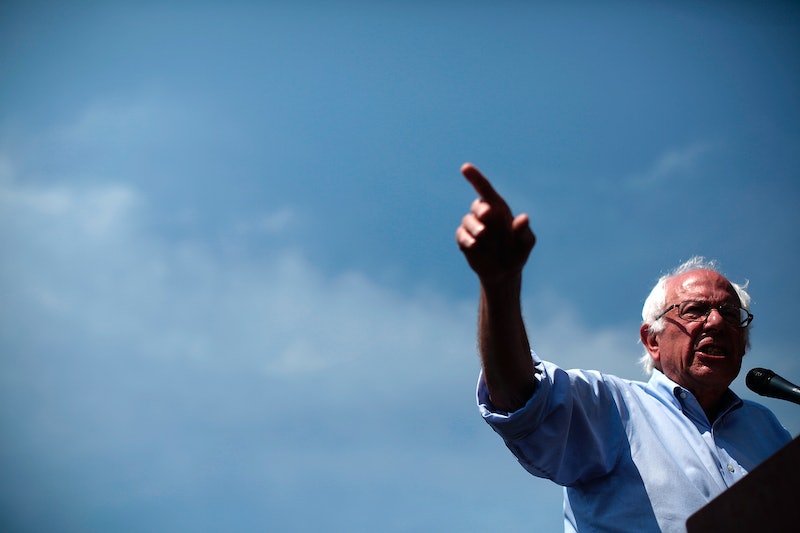 As his dynamic personality and grassroots campaign continue to nip away at the lead of frontrunner Hillary Clinton, many are noticing similarities between Bernie Sanders 2016 and Barack Obama 2008. First, there's the obvious similarity: their challenger for the Democratic nomination for president is the same female, better-funded presumptive nominee. Clinton and Obama took the 2008 race for the nomination down to the wire, with the Clinton campaign starting strong, but stumbling badly in Iowa, and never fully recovering. Obama's grassroots supporters were galvanized by his dynamic speaking style, message of unity and hope, and pledges to fight the status quo.

Sound familiar? For anyone following the Vermont senator's 2016 bid, it should. President Obama even pointed out one of the similarities in a self-deprecating joke during this year's White House Correspondents' Dinner (which was before Sanders officially joined the presidential race).

And Bernie Sanders might run. I like Bernie. Bernie is an interesting guy. Apparently some folks really want to see a pot-smoking socialist in the White House. We could get a third Obama term after all.

For the record, while he does identify as a socialist, Sanders said he's only tried weed twice. "Because I coughed a lot, I don’t know ... didn't quite work for me," he told Katie Couric. That's one difference between him and Obama, who has admitted to partaking of weed in his younger years. But there are many other areas where Obama and Sanders bear striking similarities to one another.

Both represent "firsts" for the White House

Obama was the country's first black president. Sanders, if his bid were successful, would be the first Jewish American elected to the nation's top job.

Both have benefited from grassroots support

In 2008, Obama put together a coalition of women, independents, moderates, Hispanics, blacks and young voters, which propelled him to the White House. Democratic strategist Tad Devine told The Washington Post that Sanders could build "the same kind of coalition" as the president did eight years ago.

Both have interesting ears

Try unseeing that now. I dare you. You'll never not be able to notice how Obama's ears stick out and Sanders' ears are, well, prominent.

Both appeal to younger voters

The under-45 vote was a huge part of the first Obama presidential campaign, making up xx of those who voted for him in the general election. The huge turnout at many of Sanders' rallies this summer, many of which have taken place at universities, is made up of a lot of first-time voters. They've even given him a hashtag: #feeltheBern.

Both are appealing to frustrated voters

After eight years of George W. Bush, Democrats in 2008 were feeling pretty fed up, which Obama tapped into with his message of hope and change. This is an area where Sanders may even be ahead of Obama: No one gets as agitated during a speech as Bernie. What he lacks in rhetoric (which was and is Obama's strong suit), Sanders makes up for with raw enthusiasm.

There's a long road ahead before the Democrats nominate their candidate to oppose Donald Trump (no, not really, but wouldn't that be fun to watch?), and Sanders still lags Clinton's massive fundraising efforts and party support. But like Clinton's surprising challenger in 2008, Sanders is making people sit up and pay attention.