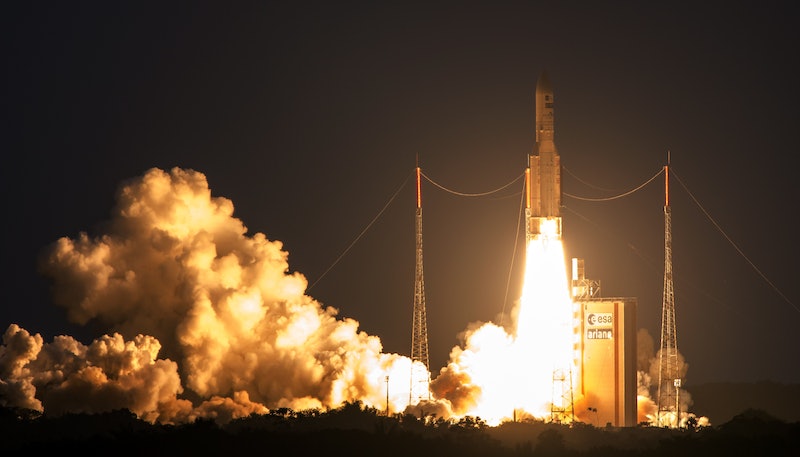 I'm going to come right out and say that I'm relieved that I will never be an astronaut, because there are a lot of unexpectedly gross things about living in space. Don't get me wrong — space exploration is awesome, and NASA is the coolest. Sure, there are things about space exploration that sound truly amazing, like seeing 16 sunsets a day, or getting to chill in zero gravity.

But while space is exciting and fascinating, actually going to space and living there seems like the most difficult, grossest thing ever. I have a lot of respect for the astronauts who train tirelessly before strapping themselves into a rocket and hurtling out of our atmosphere. I could never do it. But it's not just the inherent danger or freakiness of never-ending space that puts me off the idea. I just know that if I had to live the daily life of an astronaut, I couldn't cut it.

Now, I'm not talking about having to eat dehydrated food out of plastic containers for months on end, or having to sleep all buckled into your space nest like a toddler. I'm talking about the truly gross, gag worthy things about space that I couldn't handle. I admit it, I am a weak person. I like my hygiene and my comfortable bed, and I'm not cut out to deal with some of these gross side effects of space exploration.

Drinking Your Own Urine

In order to continuously have fresh water, the U.S. astronauts on the International Space Station have to be thrifty. And by thrifty I mean they go Bear Grylls on us and drink their own urine. It's completely purified first though. The water is collected from urine and condensate, which is breath and sweat, as well as shower run off. Apparently the system works pretty well, as, according to The Guardian, they recycle 6,000 liters of water a year. When they run out of their own pee, the U.S. astronauts apparently sometimes steal pee from the Russians — who don't drink their own urine. I think I'm solidly camp Russia in this one.

Chilling With Your Dead Skin

Astronauts are basically trapped in a big, expensive, highly efficient bubble, which means that things can't exactly get out — including dead skin. On Earth, we barely think about it, because it all falls off because of gravity. But not in space. According to astronaut Don Pettit, taking off your sock is like watching a horror movie. "This cloud, this explosion of skin particles — detritus — floats out," Pettit said. Excuse me while I dry heave.

Returning to Earth is sometimes compared to coming out of a womb, and I bet nothing makes astronauts feel like babies more than having to wear diapers. Technically, the correct term is Disposable Absorption Containment Trunk, which astronauts wear during launch, or while out on space walks. But despite the fancy name, it's basically just a big, bulky diaper.

One of the scourges of space travel is space sickness, a phenomena that affects almost every astronaut in the early days of their voyage. It's like being motion sick and hungover all at once, but so much worse. Astronauts feel nauseated, have headaches, and have difficulty locating their limbs. It sounds absolutely horrible, and it can last for up to a few days. I don't want to have the mental image of what happens in an astronaut has to vomit from the space sickness.

Pooping Into A Literal Vacuum

The answer to the number one questions — how do astronauts poop in space? Carefully. Before going to space, astronauts actually train to learn how to use the toilet, which is basically a small vacuum. They have to angle themselves over it perfectly, so that the waste goes into the vacuum, into a bag, and is stored. If it isn't done correctly... well, you could be hanging out with poo, along with all your dead skin. If the astronaut has to pee, they use a specialized tube (depending on gender), and the urine is whisked away, in order to be turned into tomorrow's coffee. Yum.

Luckily for me, I am probably the last person on Earth who would ever be chosen to navigate our solar system, so I won't have to worry about training myself to poop properly or drinking my own urine any time soon. Given everything they have to deal with up in space, it's no wonder that astronauts are such laid back people.