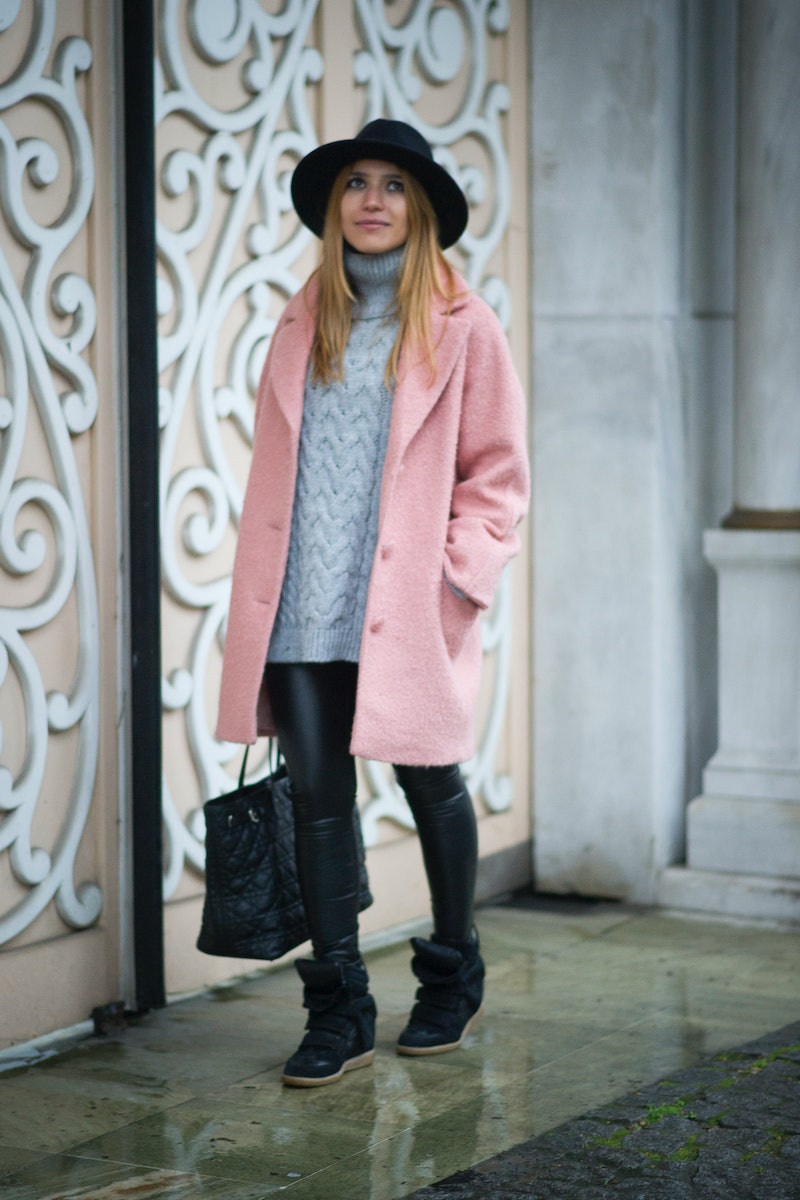 Turtlenecks don't have to mean bad fashion and awkward Junior High dances. There's no longer any reason to wonder how did turtlenecks become popular? When you take a look back in time you can see there's actually some awesome history behind the turtleneck. I mean — yes, clearly — there was a really rough patch there in the '80s and '90s when turtlenecks were only a last desperate option because of a hickey. But the times they are a-changin.

A turtleneck is the perfect piece of clothing for transitional months because it keeps you cozy without weighing you down. A slim-fitting black turtleneck can change your life. A cropped turtleneck is fabulous under boyfriend overalls. A cable knit turtleneck sweater will bring you joy as the leaves start to change. Not convinced that you need to rock on this season? Let's take a stroll through history to see how other decades styled the fall must-have.

The New York Times reported on the evolution of the turtleneck from utilitarian work wear, to a style tied to social movements, to a pretty damn dowdy item of clothing, to today's modern, refined incarnation that's equally at home ruling a boardroom or rocking the red carpet. Here is a generally true but not entirely historical account of the ebb and flow of that much maligned, but totally stylish, garment — the turtleneck — in our fashion history.

Turtlenecks are above all, practical. They can be made of warm material, endure a hard day, and allow for freedom of movement. They were popular among workers in the late 1800s for these reasons. Reinvent the turtleneck to be your go-to staple in a gorgeous nude that works in all environments.

Turtlenecks were a sailor's best friend long before we were born. The U.S. Navy adopted wool turtlenecks as part of the official uniform during WWII. Fortunately, you don't need to go to war to wear a winning nautical look. Pair a navy turtleneck with fabulously wide-legged pants for a contemporary take on the old classic.

Jayne Mansfield and other bombshells co-opted the turtleneck sweater in a super feminine way— skintight, busty bras, and kittenish photos. Reinvent the turtleneck now in a uniquely modern version of the pin-up style with the cropped turtleneck look. Fun, sassy, and super chic.

In the 1950s, the intellectual artist tribe appropriated the turtleneck as the costume du jour. Head to toe black, beatnik, and boho were all the rage. This sleek look is still sexy today. Slim cut black cigarette pants, a slim fit black turtleneck, and darling flats are as timeless today as when Audrey rocked them years ago.

Women took to the streets for equality in the 70s led by pioneers such as Gloria Steinhem. Turtlenecks were the unspoken uniform. I feel comfortably feminist enough to admire her not just for her brains, but also for her badass fashion.

My memory of turtlenecks is awkward adolescence. But like a flower that needs to blossom, my love affair with turtlenecks had to go through a rocky period to experience the gorgeous gift it can be now. Too much? OK, yeah. Puberty and turtlenecks are a tough combo.

Steve Jobs knew the power of the turtleneck. His daily uniform was functional, sleek, and pretty dang chic. Maybe he got teased for being a nerd, but there's power in having a uniform. Here Jobs is beseeching the world to understand the brilliance of his fashion choice. Harper's Bazaar creative force Matilda Kahl makes a great argument for why having a personal uniform is empowering for women. For decades, turtlenecks languished in the world of office wear and survival clothing (aka only wear it when you're freezing your booty off). Now a sleek turtleneck is a staple in any career woman's wardrobe.

The 2015 New York Fashion Week runways were teeming with turtlenecks, which is yet another reason not to fear the turtleneck. Man Repeller reported on all the times a turtleneck won't work (spoiler alert, never), proving that this slick layering piece can work with anything you throw at it.