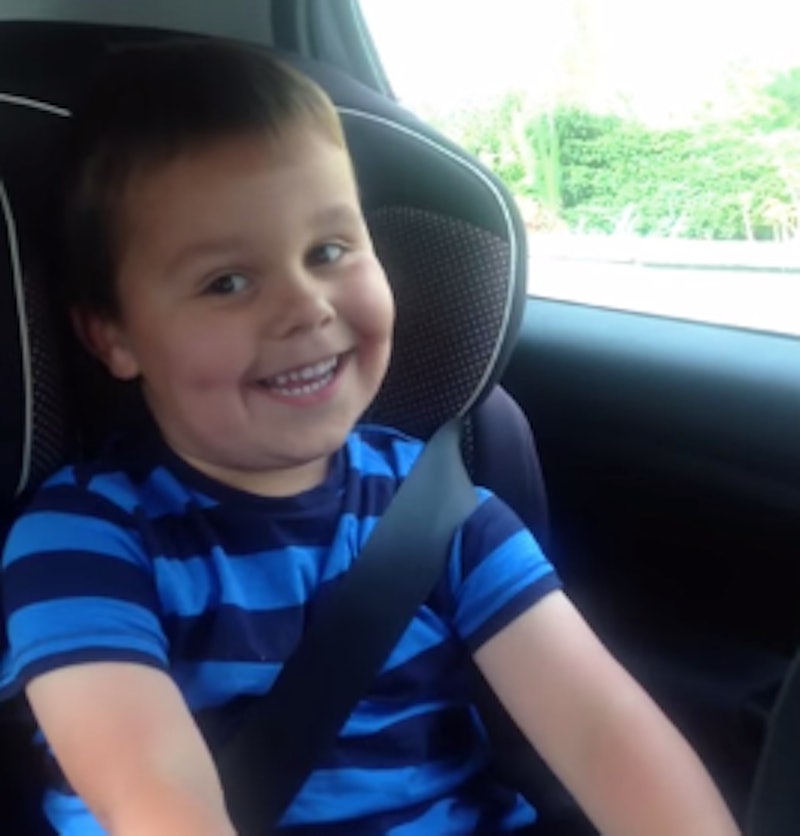 It's a truth universally acknowledged that little British kids are basically THE BEST. I've done a little analysis on this and have come to believe that it's their super cute accent mixed together with their over-the-top good manners that creates these particularly adorable tiny people. And if you're not in agreement with me on this one, then you haven't yet met the Internet's new favorite person: Sarah Bromby's son, who's becoming a big brother later this year and is super psyched about it. So much so that he promptly — and obviously very politely — loses his sh*t in excitement in what's arguably this week's best viral kid video.

"Are you joking?!" he asks his mom several times, who breaks the news by handing him a sonogram of his soon-to-be baby sibling. Nope, she tells him, before answering a slew of other super important questions like, "Is that why you've been breathing so much?" and "Mom, is it rumbling?" He also offers to help out Mom any way he can, signing up for pram-pushing duties early; and makes some equally adorable proclamations (like "He can sleep in my bed" and "I'm gonna tell my teacher!"). Oh yeah — he's totally ready for this.

And upping the cuteness factor even further (as if that's possible), he throws in a ton of positively infectious grins...

...and tops things off with a thumbs up.

Which basically all say the same thing, in a million different ways: YAAAASSSSSS! THIS BIG BROTHER THING IS SO COOL!

Oh man, it's good stuff. Watch the full vid for yourself now:

And to further continue the high you're undoubtedly on right now, here are five other hilarious clips of kids getting baby news — though some are arguably more thrilled about the prospect than others.

1. This Kid, Who Doesn't Like The Sound Of This One Bit

2. This Boy, Who's Pretty Sure His Mom's Full Of It

3. These Sisters, Whose Minds. Are. Blown.

4. This Trio Of Brothers, Who Are Having Some Mixed Reactions