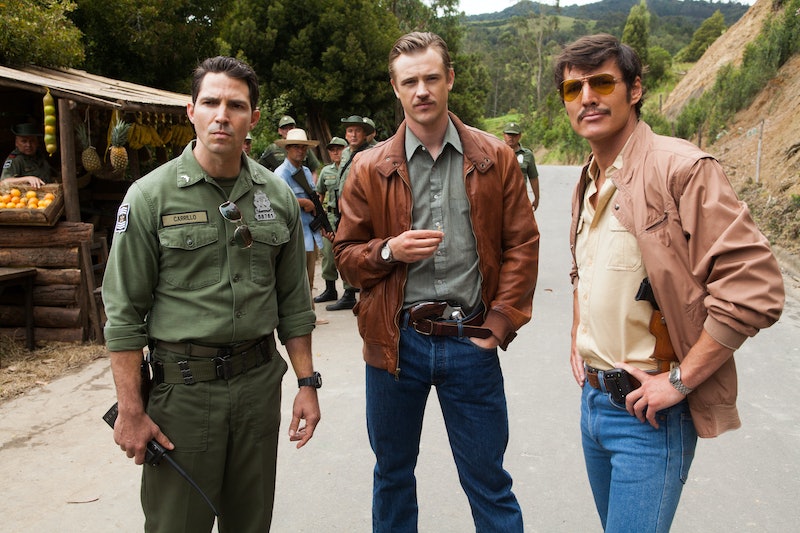 If you're jonesing for more shows like Weeds and Breaking Bad, Netflix is about to bring it in the best way. Premiering on Friday is Narcos, a new series about Pablo Escobar and the Medellin Drug Cartel that operated out of Colombia. How accurate is Narcos ? While the series looks a little bit like a documentary at times, it is actually an historical fiction. Pablo Escobar was a real life "King of Cocaine" who escaped from jail, had bloody encounters with law enforcement, and is considered the wealthiest criminal in history. His criminal organization is one of the reasons that narcotics became a problem in the United States, which is one of the thing that Narcos director Jose Padilha wanted to explore in this series.

Many of the supporting characters are based on real people, living or dead. Javier Peña, played by Pedro Pascal, was the American DEA agent who hunted him down. Steve Murphy, whose character narrates the series, was also a DEA Special Agent in real life. Peña and Murphy were partners at the DEA. In fact, (spoiler alert) both men worked with the Netflix series and provided facts about the task force they were on during that time. Meanwhile Eduardo Mendoza, who is played by Manolo Cardona, was Deputy Justice Minister, an elected official.

In addition to recognizable figures, the series also informs the audience that names have been changed and events altered. Escobar's young wife Maria does not appear to be depicted on the series, unless she has become either a background character or the Narcos character Elissa, who is described as a dance instructor with a secret. In addition, the character Valaria Velaz is based on real life journalist/media personality Virginia Vallejo. She was romantically involved with Pablo Escobar, sought political asylum in the United States, and later wrote a tell-all about her life.

As far as specific historical details go, we'll have to watch the series. I don't want to spoil too much! I will say that not all of the people depicted by Narcos are living to tell their tale. Overall, the initial reactions appear to be positive. The Guardian seems to think that the Netflix series is a realistic take, and especially appreciates how it could cause American audiences to consider how they are responsible for violence overseas by buying drugs. Slate is also impressed with the show's portrayal of Latin America as a region.

All of that said, Narcos self-identifies as magical realism. That leads me to believe that facts will be bent and incidents dramatized to create a legend. Which, if we're being really honest, is bound to happen no matter what. Even documentaries are editorialized and tend to come from an opinionated perspective.