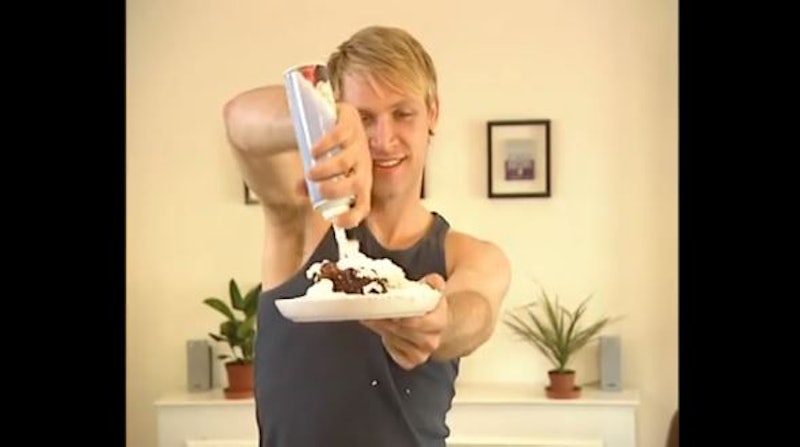 Via HuffPost Comedy, I was introduced this morning to a beautiful relic of early-2000s culture called Incredible Instant Adoring Boyfriend. The DVD turned YouTube upload features a shirtless, hot-ish British guy — the accent pushes him past "ish" territory but the shirtlessness brings him back — who lifts weights, irons, and reads magazines while spouting off all sorts of cliched ideas of what women want to hear.

"Have you lost weight?" Instant Adoring Boyfriend (henceforth IAB) asks. "They're doing a special deal at the video store on romantic comedy movies." "I've just finished cleaning behind the fridge."

IAB addresses the camera directly, as if he's talking to you, his "girlfriend," from across the room. Long stretches go by where dude just irons in silence, which ... isn't really the worst thing to ever happen on film. I work from home, and I often play movies and TV shows in the background just for the sort of lulling sound of it (Law and Orders work particularly well for this). I could deal with a hot(ish) British man talking in the background (sure, some say he's a bit of "an obsessive simpering weirdo," but certainly no more creepy than those brain orgasm folks).

Apparently, the Instant Adoring Boyfriend concept is one that just won't die. In 2009, Jarrett Creative Agency created a series of updated boyfriend clips for "a strange yet hysterical promo campaign" for Oxygen (you be the judge on that hysterical part). But this new hunk doesn't compare to original instant adoring boyfriend. Check. Him. Out.

More like this
Meet The Disney Imagineer Bringing 'Guardians Of The Galaxy' To Epcot
By Charlie Mock
Here’s What Sarah Jessica Parker’s Canned Cosmo *Actually* Tastes Like
By Emma Garza
What Is “Night Luxe?” Breaking Down TikTok’s New Aesthetic
By Courtney Young
TikTok Is Using A ‘Love Island’ Sound To Expose Their Weird Crushes
By Courtney Young
Get Even More From Bustle — Sign Up For The Newsletter