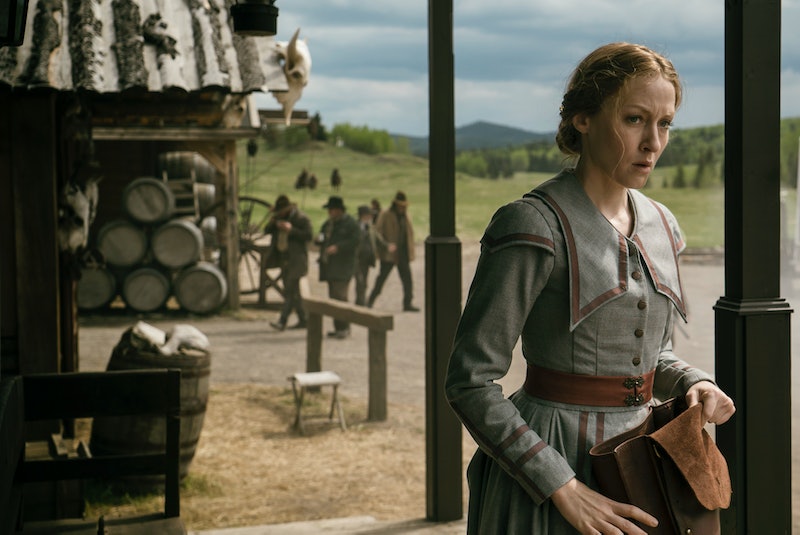 One of the most annoying habits of pop culture, for me, is the tendency to split the ending of something into two, making fans wait and milking them for every last dollar. As sad as I am to say it, it's one of the few terrible things we can attribute to Harry Potter. Once The Deathly Hallows split into two movies (which is actually the right move, given the length of the books), everyone started doing it, even if it seemed, to me, to make no sense (ahem, Mockingjay). One of the biggest fans of this technique is AMC. Once it decides to end a show — or even if a show isn't ending, but is increasingly popular—the network decides to "split" the seasons in two. Hell on Wheels, for example, is finishing up the first half of its last, 14-episode fifth season on Aug. 29. So, when will Hell on Wheels return with the second half of its final season?

Get ready for a long wait: It's not coming back until summer 2016. With a year between episodes, to me, that's really no longer two halves of one season. AMC should just call it what it is, and say it's two different seven-episode seasons. Then again, if you're behind, this means you have plenty of time to catch up. And, if you're not, here are some other train-related entertainments you can use to kill time until it comes back.

(Half) Watch The Lone Ranger

I know I'm the first person who's probably recommended watching the 2013 version of The Lone Ranger. When it came out, no one was kind to it. But, hey, if you're looking for another portrayal of the crooked dealings behind the transcontinental railroad, this movie has it — plus some amazing action sequences. And, that Armie Hammer is pretty easy on the eyes. I'd watch most of it on mute, fast-forward the Depp parts, and watch in full when the action kicks in.

Cecil B. De Mille's Union Pacific is, on the surface, about the same thing as Hell on Wheels—it's about the building of the railroad, and the personal dramas behind it. (The trailer above even uses the phrase "hell on wheels.") But, the similarities end there. Union Pacific was made in the '30s, is black-and-white, and was made with a huge budget and a cast of thousands. Sometimes, it's interesting to see two opposite takes on the same thing.

Sure, reading a 400-plus-page nonfiction book about the building of the transcontinental railroad isn't as easy as re-watching the first seven episodes of Hell on Wheels' last season. But, if you really want the true story, this Stephen E. Ambrose book has it. Just watch out for historical spoilers.

Okay, I admit this isn't about the transcontinental railroad. But, this movie is awesome, and, even though it has a following, I think too few people have seen it. It's set in a futuristic, post-apocalyptic world where society exists solely on a moving train, and there are obvious class differences between people riding coach and people riding in the front of the train. So, like in Hell on Wheels, there are the haves and the have-nots in Snowpiercer — only this train's not stopping.

I mean the board game, not the Beatles song, although you could do both at once, I guess. A couple Christmases ago, every family I knew got Ticket to Ride — a game where you compete to control as much of the nationwide tracks as possible — as a gift, and every family that busted it open on Christmas night got into big fights about it. (One friend's father famously started a sentence with, "Well, if we're going to start cheating..." — a phrase my friends still use today when we play games.) The rules are simple, but there's just something about the design of the game that makes people particularly bloodthirsty. So, if you really wanted to experience the treachery of building the transcontinental railroad first-hand, gather up some of your post competitive friends for a round. But, I wouldn't recommend that you resolve disputes the way they do on Hell on Wheels.