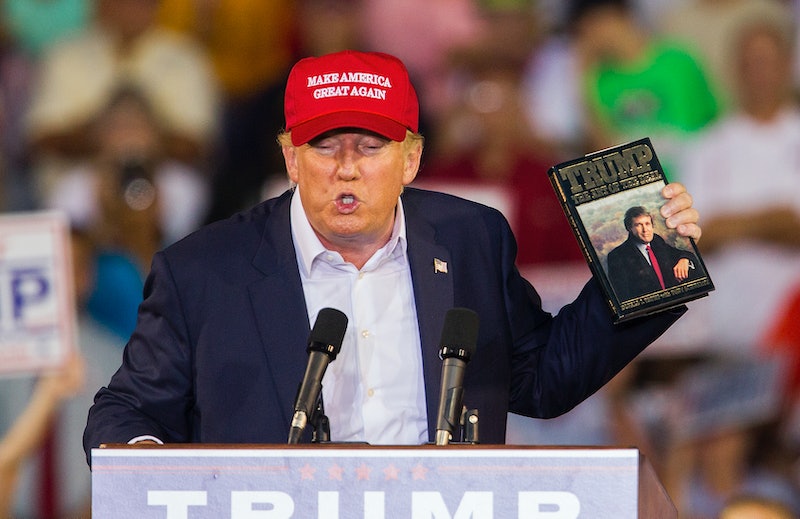 If you're going to be talking politics right now, some amount of conversation is probably going to be dedicated to Donald J. Trump. He's continuing to cruise at the top of the GOP primary polls right now, and he's nothing if not headline-grabbing, what with all the wildly offensive comments, the unearned sense of authority, the crude Twitter account, the whole deal. The fact is, some people like that kind of stuff, and you might even have to talk to one of them someday. So, here are 5 things to say to any Trump-loving Republicans you might come across.

It might seem like a remote contingency now, but you never know what could happen. However unlikely a Donald Trump presidency might seem, it's no less a bizarre and cautionary future to consider, and for each passing week he's led in the polls, he's been proving a whole lot of political observers wrong.

Trump's already weathered multiple controversies that would've sunk other less-sensational candidates, and he's never really offered a full-throated apology for any of them. He's basically a candidate who exists outside the traditional rules of presidential campaigns, which can lead conversations about him to some rather weird places. Here are some answers you can give if you're in a conversation — or an outright argument — with a big-time Trump fan.

The concept of "telling it like it is" has gotten to a pretty unhelpful place in American politics. When people who get praised for so-called straight-talk, it's so often about tone and spectacle, above facts, realistic expectations, common decency, that kind of stuff.

For example, was Trump "telling it like it is" when he generalized Mexican immigrants as criminals and rapists during his presidential announcement speech? Sure, he gave it that reedy Trump delivery, but doesn't it matter that the statistics blatantly contradict him? That by the best research available, first-generation immigrants commit less crimes than native-born citizens? Should we consider all fallacious, aggressively xenophobic shit-talking to actually be heady truth-telling?

2. "Trump Comes Right Out And Admits He Worked The Political System!"

He has indeed done this, and it's probably one of his more effective ideas at selling himself to a broader audience — the image of a former big business political influencer who's now changed his stripes and is ready to tell everyone about those seedy things he once did.

The hanging implication, obviously, is that he wouldn't resort to those sorts of relationships if he were in office, and that might or might not be true. But Trump simply paying lip service to the idea that politicians are all bought and paid for isn't exactly new or dynamic. To the contrary, it's basically cliche how candidates for political office are keen to indict the current climate in Washington as corrupt and needing reform — in many cases, right up until the moment they get there.

3. "Well, He Was Right To Respond To That Bimbo Megyn Kelly."

Hey, whoa there! I didn't realize you were a misogynist. Seriously — if you watched the Fox News GOP debate from earlier this month, and your conclusion was that Kelly did something wrong, you might have some issues with women worth reflecting on.

What actually happened was this: a professional host and interviewer asked a tough, but extremely relevant and important question of a presidential candidate. A question that Fox News likely has its own reasons for wanting asked, too — Donald Trump's history of verbal abuse towards women, some of which is alleged and some of which has happened in plain daylight on Twitter, could be a huge stumbling block in a general election.

If you're the sort of person who was OK with Trump tacitly calling Kelly a "bimbo" on Twitter and continuing to bring her up despite having every reason to let it go, it's probably safe to guess you're not a big Hillary Clinton fan, right? Do you really want to envision a reality where Clinton thumps Trump in a general election because his attitude towards women turns off the broader American public? Do you really want to know your man lost the White House over a penchant for angry tweets? The primary debates are basically the time to get candidates to answer on these sort of issues. Kelly was right to ask it, and frankly, it should've a favor to the Republican Party.

4. "I Like That Trump Tweets All The Time, And Doesn't Back Down. We Never Win Anymore!"

I think most people would agree that impulse control is an important quality in a president. It's a stressful job, being on-call 24/7 for all the world's worst, most devastating and fraught moments, which is why the notion of the steady-handed leader often bolsters a voter's confidence.

It was the whole conceit of that 3 a.m. phone call campaign ad Clinton ran in 2008, trying to exploit then-Sen. Barack Obama's relative inexperience. And while Democratic voters clearly thought Obama was more than serious-minded and dedicated enough to handle that responsibility, are you sure that claim can be made for Trump? If my president got an early morning phone call, suffice to say, I'd rather he not be busy taunting Megyn Kelly on Twitter.

5. "We Need Somebody Who'll Finally Get Tough On Foreign Policy."

Well, there's no doubt that Trump talks a tough game when it comes to other countries — he sort of makes it sound like the world will just roll over in front of him, exposing its collective belly for him to scratch. You may remember when he insisted that he'd bring oil prices down by swearing at OPEC leaders back in 2011, when he was teasing a possible 2012 run. Here's what he told a Las Vegas audience, as detailed by Mother Jones.

We have nobody in Washington that sits back and said, you're not going to raise that f***ing price.

He also had a simple message for China, saying "listen you motherf****rs, we're going to tax you 25 percent!" This is in keeping with the general level of seriousness he seems to apply to his prognostications — he also insists that if he's elected, he'll force the Mexican government to finance a border wall, and that's still nowhere near the most antagonistic component of his far-right immigration plan.

If you're the kind of person who wants some more strident red lines in international negotiations, say — to try to secure those ever-elusive "better deals" that some conservatives have been harping on lately — that's fine, even if we might disagree. But be forewarned: what Trump's putting out there is little more than presumptuous bombast, so don't be shocked if that ridiculous wall idea never comes to fruition.