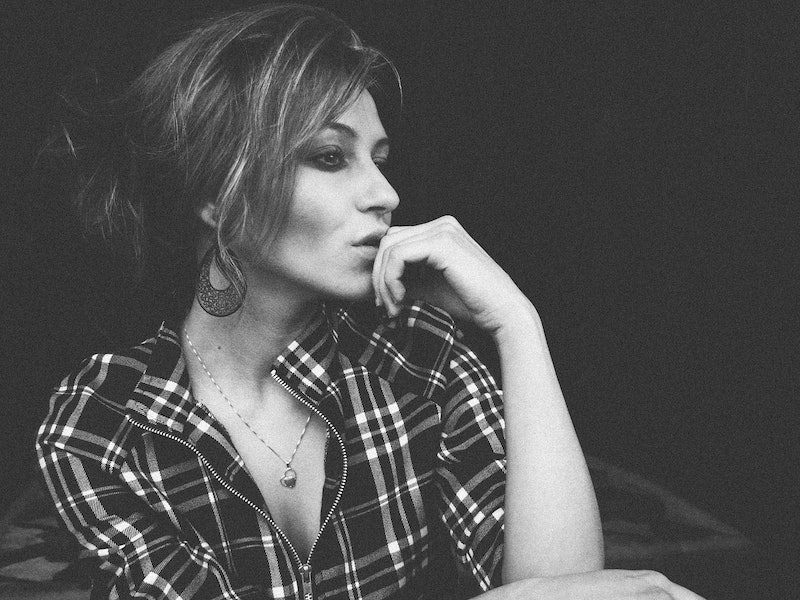 To clarify, I am very pro-breaking-up. Life is too short to be with someone you don't have fun with, or who makes you feels shitty about who you are, or who never laughs at your jokes (Taylor Swift knows what I'm talking about). But I also think that you should work through rough patches in relationships when you can. I'm team Give It A Fair Shot. My parents have been together for 35 years, and seeing how they sometimes want to kill each other, but are also perfectly suited to one another and are building their own unique version of life together, has made me a believer in toughing it out through rough patches.

My mom likes to say that "50/50" effort in a relationship is a joke. "Sometimes it's 30/70, sometimes it's 80/20," she says. One person's always giving a little more or a little less — and if you expect it to be perfectly balanced, you're in for a bad time. It's also important to know the difference between relationship deficiencies and circumstantial f*ckery. My parents lived in different states while they dated for four years, for example. And this was in the '70s, so Gchat was not a thing. They wrote LETTERS to each other. It was tough.

But my mom was the first person to tell my sister to give up on a relationship of five years when my sister admitted that she felt like the "spark" had gone. My mom told her that if it was gone even before getting married, then there was no hope. I see the way my parents laugh with each other, and I have a feeling she's right about that.

So what makes a relationship worth fighting for? The ones I see working have a few things in common: The people in them have their differences and disagree sometimes, but damn it if there isn't a very clear spark there. And both people should be able to forge out their own lives while with each other. My dad, for example, flies planes, fixes cars, and runs a classic film festival in our backyard. My mom sews everything from window valances to baby hats for her granddaughter, kayaks and snowshoes, and finds and reads the most obscure, historically interesting books, like Louisa May Alcott's early mystery stories.

There's breathing room for them to be themselves, and they appreciate and respect those differences — even while arguing about where to eat dinner. It gives me hope that relationships do exist that allow you to be the best version of yourself and to build a life that you couldn't have alone, even if it's not always roses. And when you find one, you should hold on for dear life.

Sometimes we get stuck in bad patterns of behavior with partners that we can't get out of. If you feel like your person still brings out the best in you even during tough times — if you find yourself apologizing when you're wrong, trying to be a better listener, or laughing your way out of arguments — you've got a relationship worth working on. Bonus points for your partner supporting your hobbies and interests.

2. The Difficulties Are Circumstantial

Are things tough because you have conflicting work schedules, because one of you is going through a stressful life event, or because you're dating long-distance? Maybe you're sharing a studio, and you just want to get in the g-damn bathroom once in a while?

You might come out of this tough time even stronger, if you want to keep trying.

3. Overall, The Good Times Outweigh The Bad Ones

4. And The Bad Times Still Involve Trust, Respect, And Safety

You can fight without feeling disrespected, unloved, or threatened. You can go to your separate corners to cool down and trust the other person will be there when you come out. You're willing to keep talking and keep trying, even when the conversation is hard, and so are they.You don't feel the need to stealth check your person's email.

5. You're Hearing Each Other

Fights feel productive; frustrations are heard; concerns that are taken seriously, and changes are made when necessary. Maybe things have been tough, but you're not having the same fight over and over with no progress.

If your partner is a blast to be around when things are good, but also supportive when they're not, they're a keeper.

7. Your Friends And Family Are With It

My mom knows this stuff, and so does yours. Your dad, siblings, and best friends do, too. Ask them if they see this working out. Their input might surprise you.

8. You're Attracted To Them

Cannot underestimate the importance of this. As my mom likes to say, regaining the "spark" is for married people — if you're two years into dating and it's gone, cut your losses.

Physical attraction isn't the only thing — you have to like their mind and stuff, obvi.

10. You're Sure It's The Person, And Not The Makeup/Breakup Drama, That You're Attached To

This can sometimes be harder to differentiate than you'd think.

11. You're Both Willing To Try Harder And Better

Because you can only really control yourself. If you're both going to do better, you have to trust that they'll make the changes on their end, too.

12. On Your Death Bed, You'll Look Back On This Relationship As Having Enriched Your Life

Are you being supported? Encouraged? Challenged? Introduced to new experiences? Sometimes, we get so addicted to drama that we lose sight of whether a relationship is actually contributing anything to our lives.

Maybe it's not meant to be in the long run, but if this relationship is the opportunity to face a fear or break out of an old pattern, it's sometimes worth working through. You might need time to get to the other side of some of your own issues and demons before it's time to let a relationship go. That's okay.

It's not over till it's over. If you're still in love, you can't help trying to make things work. Just ... don't lose too much time, OK?

More like this
5 Signs You Have A Toxic Relationship With Yourself
By Lexi Inks
21 Galentine’s Day Memes To Celebrate Your Best Friends
By Meghan Bassett and Mia Mercado
23 Super Sweet Things To Write In A Valentine's Day Card
By Karen Belz and Lexi Inks
Here’s What TikTok's "Mascara” Trend Is *Really* About
By El Hunt
Get Even More From Bustle — Sign Up For The Newsletter
From hair trends to relationship advice, our daily newsletter has everything you need to sound like a person who’s on TikTok, even if you aren’t.