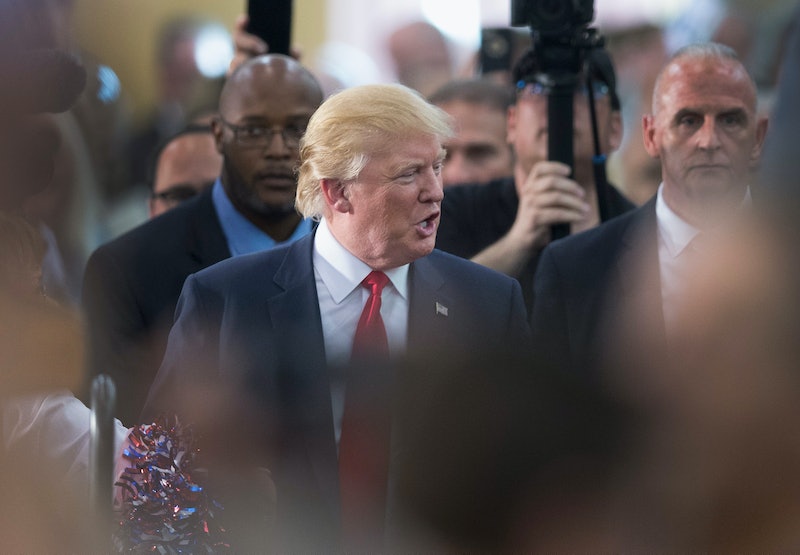 Donald Trump doesn't need your money, losers. At least, that's what he wants you to think. At a campaign event — let's call it a "gathering of a few thousand friends" — on Friday night in Norwood, Mass., the brash billionaire business mogul insisted to reporters that the $100-a-head dinner wasn't a fundraiser, but a small rally at which he would be speaking to supporters. And eating lobster. And drinking fancy cocktails. Whatever the dinner was supposed to be, however, Trump's "non-fundraiser" fundraiser was contradictory in the most evident and ridiculous way imaginable — and it will be near-impossible for his 2016 campaign staff to try and explain it away later.

"This is not a fundraiser," said Trump, in a statement to reporters at the event, which was hosted by Boston-area car dealership magnate Ernie Boch, Jr. at the local billionaire's mansion. "I turn down a lot of money."

The event Friday was reported by The Boston Globe to be invite-only. Guests, who were asked for a "suggested $100 donation," were met at the front gates of Boch's property by a large check-in table with a sign that read, "Entry Fee: $100 per person." Earlier in the day, Boch told reporters that all locals should "come on down" to the event, including a group of pro-choice protesters who had planned to show up earlier in the evening.

A sign outside the event also read, "Please have checks made payable to: Donald J. Trump for President, Inc. or cash ready on entry. Thank you."

CNN reported that Trump's campaign manager, Corey Lewandowski, had taken down the notice after hearing of the media coverage surrounding the event, although "several smaller signs" remained throughout the check-in area. So, it definitely wasn't a fundraiser. It was simply an event where guests had to pay money, which would eventually go to the Trump campaign, in order to get in. Sounds cogent.

Trump isn't exactly known for being shy about his wealth — in fact, since his campaign first launched a couple months ago, he hasn't just embraced his role in the GOP field as a rich, power-hungry egomaniac, he's practically used it as a selling point. In his campaign kickoff speech on June 16, Trump bragged,

I have liabilities of about $500 million. That’s long-term debt, very low interest rates. In fact, one of the big banks came to me and said, "Donald, you don’t have enough borrowings. Could we loan you $4 billion?" I said, "I don’t need it. I don’t want it. And I’ve been there. I don’t want it." But in two seconds, they give me whatever I wanted. So I have a total net worth [...] well-over $10 billion. ... I’m not doing that to brag, because you know what? I don’t have to brag. I don’t have to, believe it or not. I’m doing that to say that that’s the kind of thinking our country needs.

So, sure. Trump has turned down money before. But that's definitely not what Friday's denial was all about.

In that same campaign kickoff speech, Trump also promised that he would be running solely on his own funds, telling the raucous crowd that he was "not using the lobbyists ... [or] donors" because his rivals had allowed that sort of tainted money to affect their presidential bids in the past. Fast forward to July, and Trump was already eating his own words.

At a private dinner of around 200 guests that month, Trump spoke briefly to supporters of the Make America Great Again PAC, a pro-Trump organization which had hosted the event at a private residence in New York.

"It was a combination of friends that have known Mr. Trump for years while others were meeting him for the first time," said the PAC's consultant, Mike Ciletti, in a statement to Politico at the time. Trump's manager Lewandowski also denied that the event was a fundraiser, telling the news outlet that the 2016 candidate had not attended any PAC fundraisers "to [his] knowledge." Since the mid-July event, however, Trump has regularly been sighted attending meeting after meeting, staunchly denying that any of those events were, in fact, traditional fundraisers.

Whatever Trump wants to call Friday's dinner event in public, the facts remain: Money has changed hands, and eventually, that same money will make its way back up the food chain to the 2016 candidate and his camp of staffers. Despite all his promises to the latter, it seems that Trump has indeed become one of the candidates he criticized so early in the game. Isn't it nice how things work themselves out?