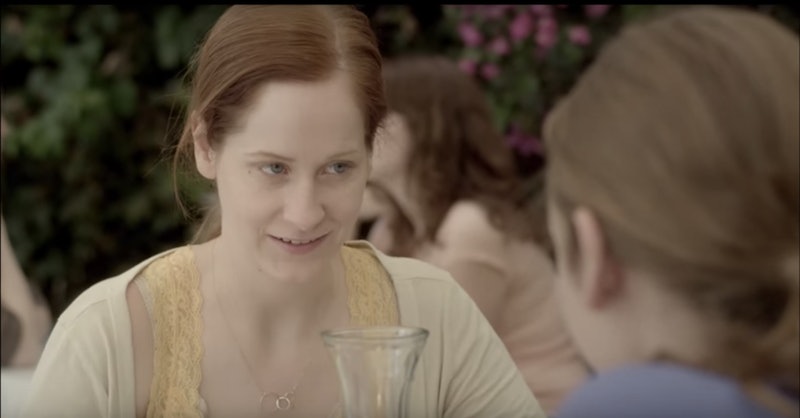 Over the years, there've been a lot of movies about virgins obsessed with changing their statues: American Pie; The 40-Year-Old Virgin; Superbad; even indies like The Sessions. Let me rephrase; there've been a lot of movies about male virgins trying to have sex. Women who haven't yet done the deed (or, for that matter, women who just talk about their sexualities) aren't typically the stars of movies, but thankfully, a few recent films have set out to change that, such as The To-Do List, Very Good Girls, Diary of a Teenage Girl and now, Bread and Butter , a new film about Amelia, a 30-year-old virgin dealing with romance for the very first time.

In the indie film, described as an "anti-romantic comedy," Amelia (Christine Weatherup) is a receptionist for a life coach who, along with her parents and best friend, has tried — and failed — to help her find the story-worthy love she's been waiting for. Yet when she finally does meet Leonard (Micah Hauptman, of Homeland), he has some pretty alarming issues — and to make matters even more complicated, she also starts dating the emotionally stunted Daniel (SNL's Bobby Moynihan). Amelia's quickly forced to decide not only which man she prefers, but whether her grand ideas of romance, love, and, yes, sex, are worth fighting for.

The film, out on iTunes and VOD Sept. 1, is a quirky, sweet comedy, and it's filled with memorable one-liners: "I can see your hymen from here," Amelia's boss (Victorious' Eric Lange) tells her when she questions how he knows that she's a virgin. It also presents some pretty important questions about love, romance, and, most significantly, the stigma of and issues that come with a woman exploring her own sexuality. Not many movies are bold enough to even bring up that subject, let alone make it its central focus, but Bread and Butter puts Amelia's sex life front and center — often hilariously and awkwardly, as you can see in this exclusive clip (and check out an exclusive poster below, as well). The video features Amelia's boss offering to set her up with a patient (Moynihan), who happens to also be a virgin. Suffice to say, she doesn't take the set-up suggestion very well.

Starring Weatherup, Moynihan, and Orange is the New Black's Lauren Lapkus, Bread and Butter is a sweet and important little movie — and it's written and directed by a woman, Liz Manashil, which is pretty damn cool, as well. This is a movie made by, for, and about women — what's not to love?

More like this
The 'Lady Chatterley's Lover' Book Leaves Us With A Troubling Question
By Catharina Cheung
Amanda Gorman Shared A Powerful Message On Meghan Markle’s Penultimate Podcast
By Darshita Goyal
Claire Foy & Rooney Mara Revisit A Devastating Tale In 'Women Talking'
By Bustle UK
The 'Love, Lizzo' Harry Styles Scene Is Just 1 Moment That Made Fans Feel Seen
By Brad Witter
Get Even More From Bustle — Sign Up For The Newsletter